You are here: Home / Dogs / You Won’t Believe What They Found In Me 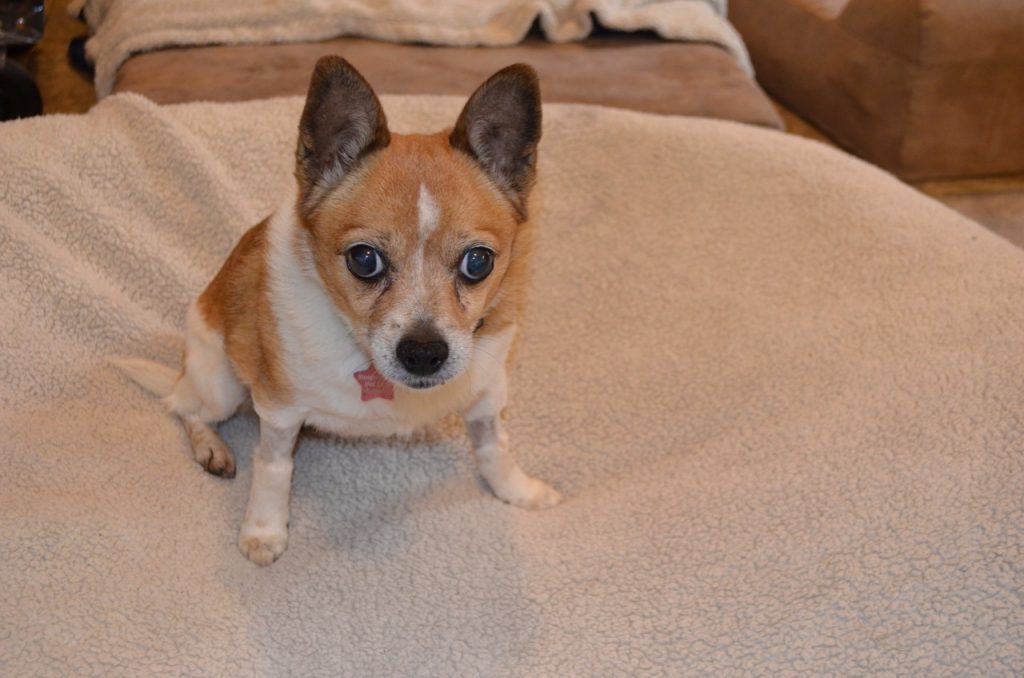 Whenever we get a new arrival — particularly an elderly one like blind Honey, with no known history — we like to do what we call a “senior screen” with our internal medicine specialists. This involves comprehensive blood work, tick borne disease panels, chest X-rays, and abdominal ultrasounds. If there’s a suspected heart problem, we can do an echocardiogram, too. This way we have a complete medical baseline to start with. Sometimes these senior screens are uneventful (yay!), and other times they involve real surprises … as in Honey’s case. She was a perfect example of why we do these.

The imaging showed Honey had a large rock in her stomach, right where the stomach empties into the small intestine at a juncture called the pylorus: 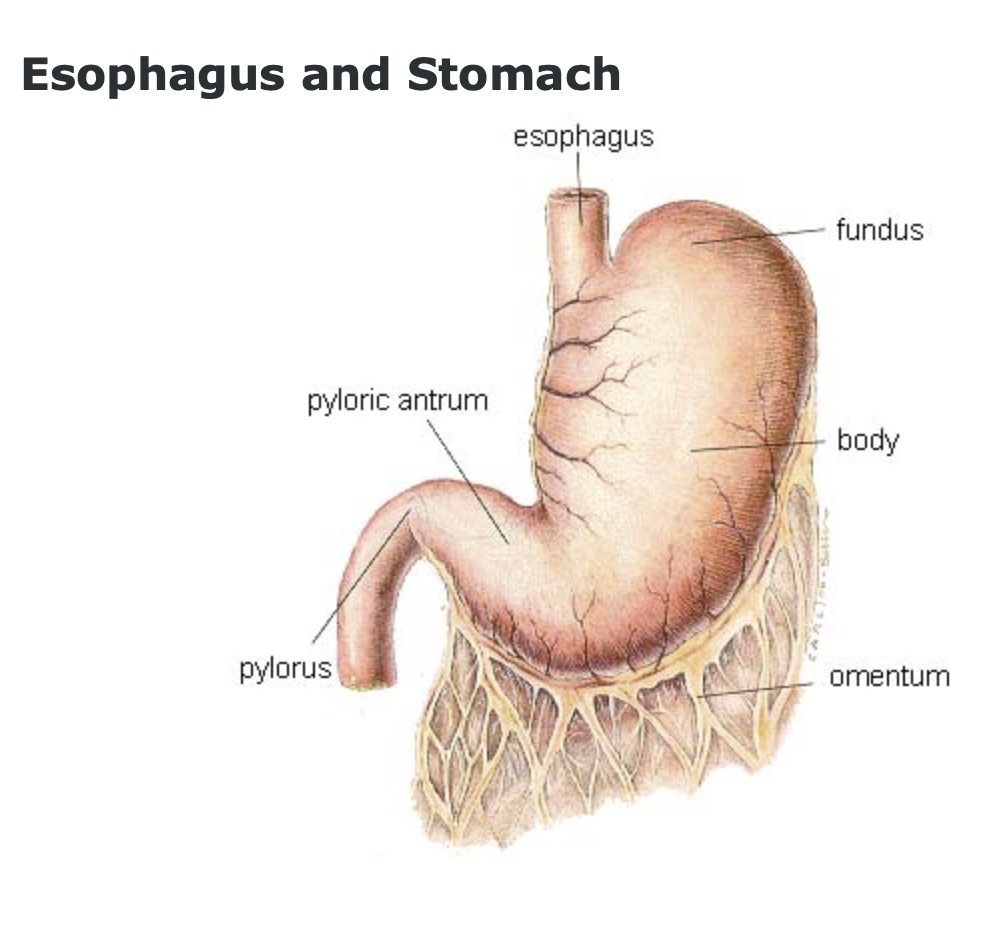 Not only large — it measures over an inch in length and a half inch deep and a half inch wide — but it was triangular shaped, with very sharp ends in every direction. If this had gone through the pylorus and into Honey’s intestines, it most likely would have perforated them.

After seeing the rock on the images, our internal medicine specialist at Peak Veterinary Referral Center in Burlington, Dr. Marielle Goossens, scheduled a follow-up a few days later. She would first try to induce vomiting and see if that might bring the rock back up; failing that, she would try to retrieve it using an endoscope with Honey under anesthesia; and if that didn’t work, the surgery team at Peak would be standing by to take her straight into the operating room. They would remove it by making an incision in her stomach.

The vomiting did not work, and in fact Honey never even seemed nauseous and kept wagging her tail.

So Dr. Goossens put Honey under anesthesia and carefully inserted the endoscope down her throat. The scope has a little basket catcher on the end for retrieving foreign objects like this. Dr. Goossens was able to grab the rock on her very first try (!) and gently extract it back up and out of Honey. Here’s a view from the endoscope during the procedure: 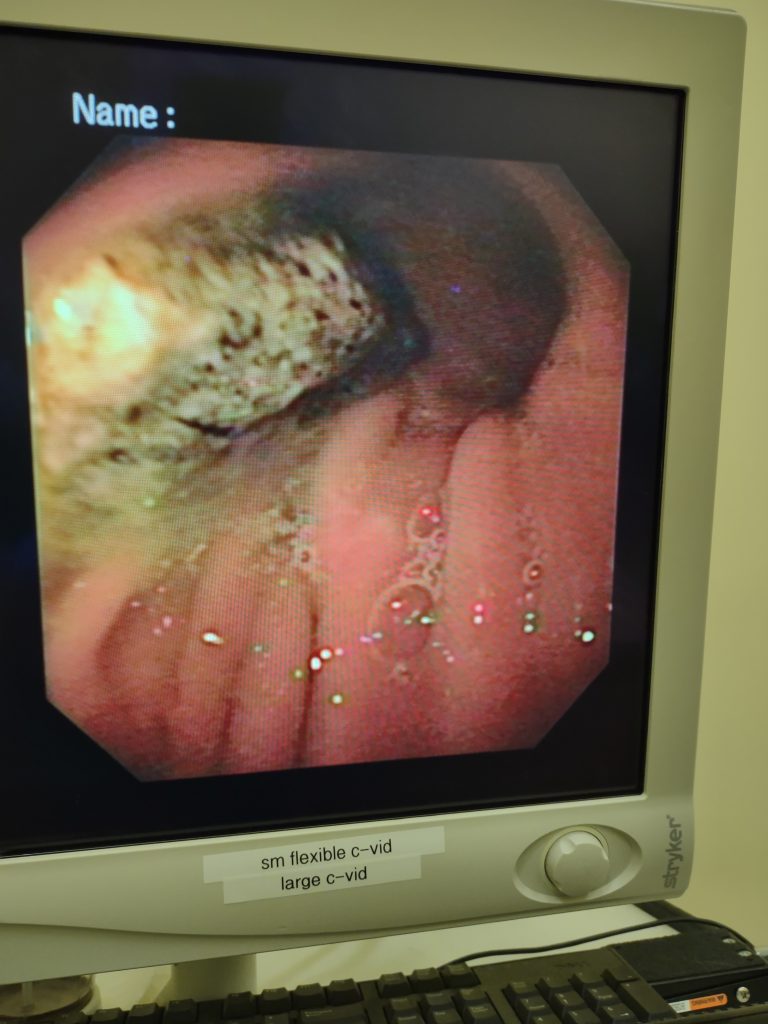 Dr. Goossens said the rock was partially obstructing the opening to the intestine, and she was surprised Honey had been able to eat and drink normally given the degree of blockage. So Honey was very, very lucky this hadn’t already gone into her intestines. 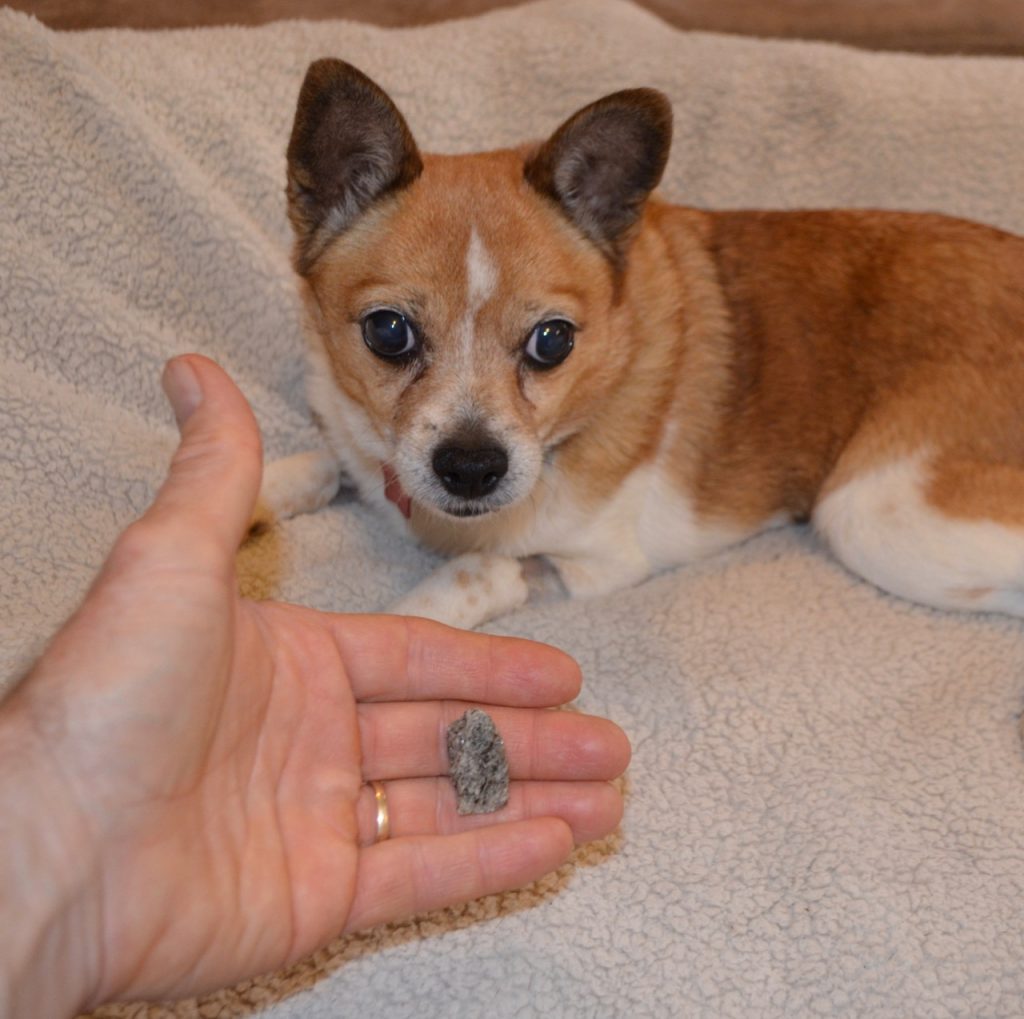 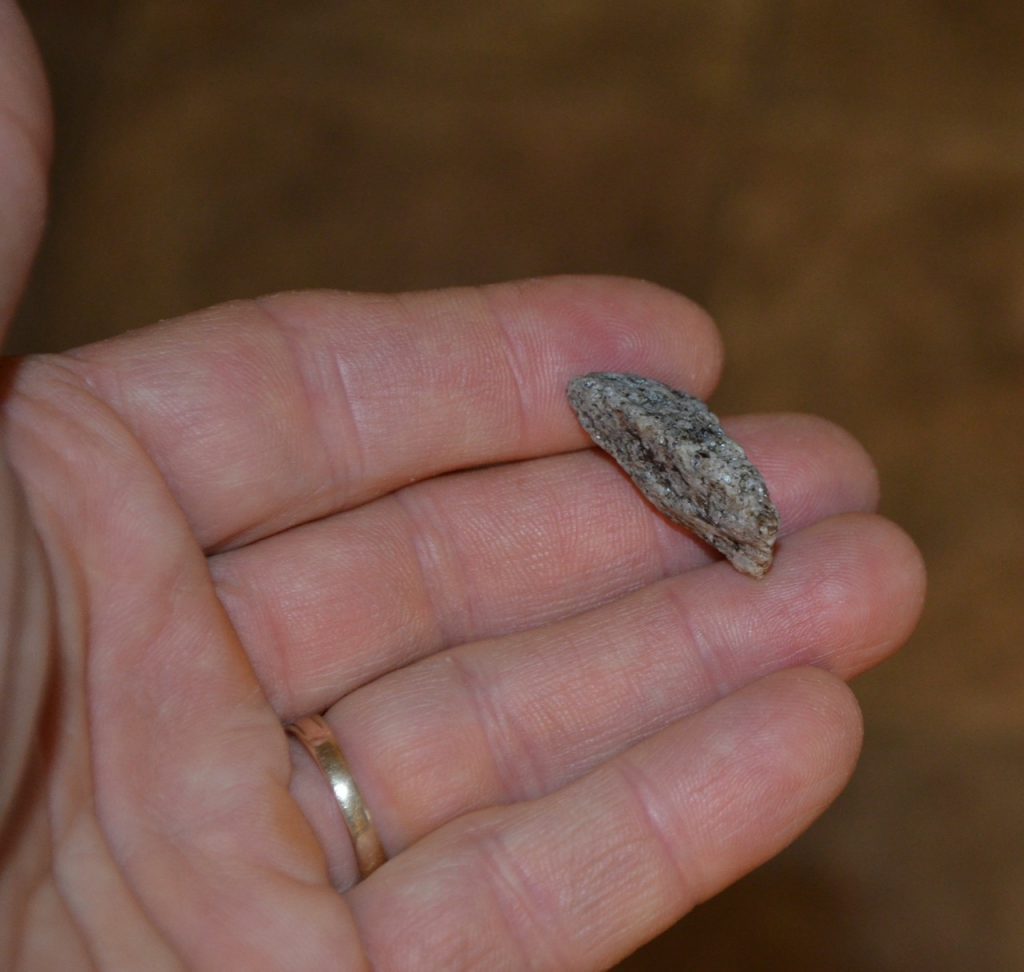 The weird thing is that Honey is not one of those dogs constantly eating whatever they find. We’ve never seen her eating anything in the yard or in the house. And she has no access to gravel here in any case. We suspect that when she was wandering around as a stray she probably got hungry and ate that, then decided it wasn’t a good idea to eat more. It was interesting that there were no other foreign objects in her stomach, just this one sharp-angled rock.

But here’s the even weirder thing:  When I took the rock out of the plastic vial and held it in front of Honey for these photos, she immediately smelled the rock, edged towards my hand, and tried to take it from me with her mouth. (Remember, she’s blind and couldn’t see it.) She kept being drawn to it. That’s why I was holding it farther away in the photo you see above. I was shocked to see her interested in that thing, especially since we’ve seen no other similar behavior since she arrived.

Speaking of blindness, Honey also saw our ophthalmologist at Peak, who determined Honey was blind from SARDS (Sudden Acquired Retinal Degeneration Syndrome, the “syndrome” meaning we don’t know what causes it). So there isn’t anything we can do to restore her vision.

The good news is that the rest of Honey’s diagnostics were unremarkable, so she’s in pretty good health for a dog of her age. And thanks to the senior screen, we averted a crisis with that dang rock!