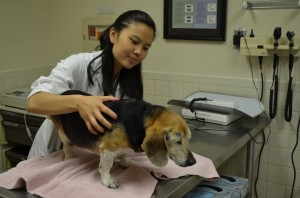 Just over a month ago, I was researching online a couple of the final “rescue” chemotherapies our oncologist said we could still try with Widget. We had gone through all of the standard protocols by that point, and Widget’s lymphoma was not responding to them any longer. The last ones in the oncology “toolkit” didn’t have great success rates (generally less than 40%), and for a dog whose lymphoma was proving resistant, we wondered if it was worth it for Widget. In the process of doing this research I somehow came across a website about a new, experimental drug to treat canine lymphoma.

It was still in the trial stage, with various clinical studies underway around the country, and was called VDC-1101. It was initially developed by a pharmaceutical company, Gilead Sciences, as a drug to treat lymphoma in humans — here’s a press release that describes the interesting history and how it became focused instead on treating canine lymphoma. The company that has acquired the rights to the’the drug, VetDC, said that their trials in dogs?are achieving?a 77% success rate.

None of the veterinary teaching hospitals or oncology clinics currently conducting studies’that were listed on the website were anywhere near us — as I recall, the closest was in Georgia. So I emailed an executive at VetDC?and asked if our own oncologist could get the drug for Widget outside of a trial setting for “compassionate use,” or if there were any other trials near us that weren’t listed on the site. The executive was kind enough to email back the very next day, telling me’that there was in fact a trial underway at Tufts Cummings School of Veterinary Medicine near Boston, and she copied the Tufts oncologist running the trial on her email to me. Our oncologist at Peak, Dr. Kendra Knapik, then got in touch with the?Tufts oncologist, Dr. Kristine Burgess, who was willing to get Widget enrolled in the trial.

It took a month to get everything arranged, and during this time Dr. Knapik continued to treat Widget with other chemo drugs to try and slow the advance of her lymphoma. We were trying to buy enough time to get her to the trial. Finally, yesterday I was able to take Widget down to Tufts to have’this experimental drug administered. In the photo above with Widget is Dr. Felicia Lew, an oncology resident who works with Dr. Burgess, conducting a physical exam as part of the intake process. Dr. Lew and Dr. Burgess told me yesterday they are very impressed with the results they are seeing in treating canine lymphoma with this new drug, and that it is well tolerated by their patients with very few side effects.

In pulling up the website for the drug this morning to include in this post, I see the company has just given the medication a new marketing brand name instead of the VDC-1101 designation: Tanovea. This must be very recent, because at Tufts yesterday everyone was still referring to it as VDC-1101.

After running a few more tests to get a baseline on Widget for the study, Dr. Lew administered the drug to her in a 30-minute long infusion. Later, when I carried Widget out of the hospital in the afternoon and set her down on the grass in the shade of a tree to run around for a bit, she did exactly that. Her head was up, her tail was up, and she was alert and sniffing both the grass and the air. Usually after having chemotherapy she’s quiet and subdued, a little “lost” acting. I was surprised by how active she was this time. Last night, after we got home, she was ready to eat dinner and had already enjoyed a few treats on the four-hour drive back to the farm. Today she’s kind of her usual self. So my initial impression is that this particular drug?does seem easier on her than many of the others she’s had. Whether it’s going to work or not we probably won’t know for several more days. If all goes well, her next treatment at Tufts is scheduled for three weeks from now.