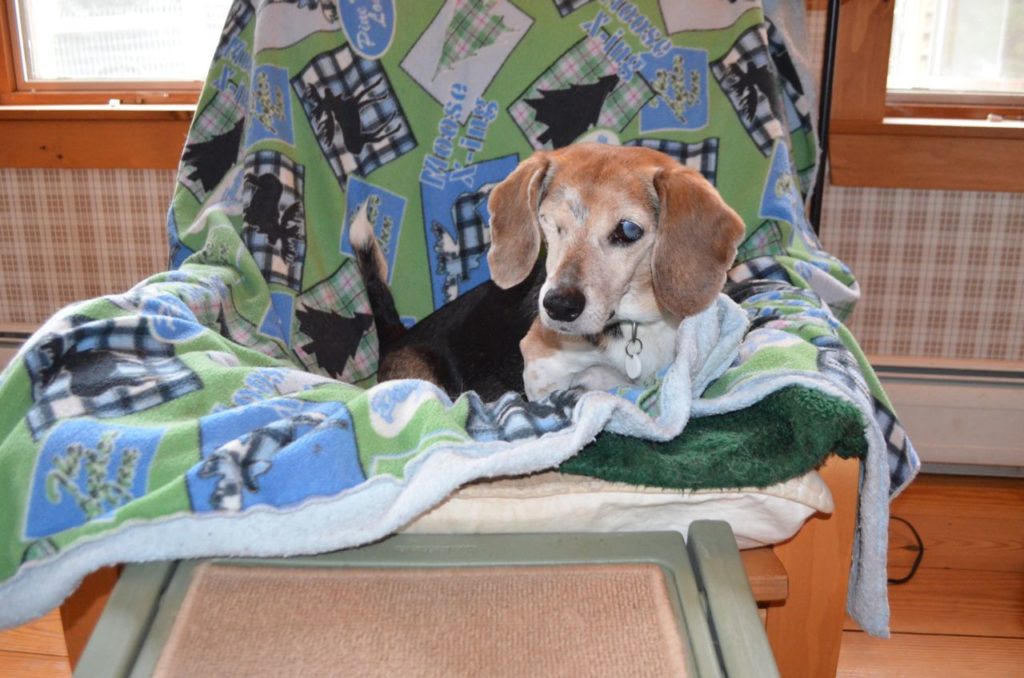 Widget’s long and hard-fought battle with lymphoma ended last Tuesday. For ten months, she had gone through every chemotherapy protocol available, including an experimental drug?for canine lymphoma administered at Tufts. Throughout it all, Widget?maintained her bossy, irrepressible personality and a quality of life that amazed us. Though she had some ups-and-downs along the way, she continued to be her usual self. It was hard to accept that lymphoma?was ravaging her body. But in the final months the swelling lymph node on the left side of her neck was a visible reminder of the fight she was putting up with the cancer.

A few weeks ago, I took her back to Tufts so they could evaluate her response to the experimental drug. We?already knew it had failed, because the lymph node had started growing again. But for the purposes of the drug trial, I wanted to let them see for themselves so they could document it. Up to that point, Widget had the same zest for life she’d always had. Her only problem was the size of that one lymph node was beginning to get in her way. The oncologist who was supervising the trial at Tufts, Dr. Kristine Burgess, saw Widget that day. She said there was one last option we could try: radiation therapy to shrink the?lymph nodes around Widget’s?neck. She couldn’t guarantee?if radiation would work, or for how long, but she thought it was worth a shot. Dr. Burgess said that if Widget’s quality of life wasn’t so high, she wouldn’t recommend it, but given how well she was doing, it might give her some more time.

I agreed, and she moved schedules around in multiple departments so Widget could get the radiation that very day. Twenty-four hours later, back at home, we noticed the big node in particular was a bit smaller. The next day, she had loose skin around it, and it was definitely shrinking. A few more days, and smaller still. Our hopes rose. But then, a week later, as I was pilling Widget one morning, I realized the node seemed bigger. It was hard to tell, but the following day, I had no doubt: it was bigger. And with that, we knew the end was coming soon.

On Thursday, July 3rd, I took Widget back to see her oncologist at Peak, Dr. Kendra Knapik, for what we realized?was her final visit. That evening I got back to the farm with Widget and let her out of the van to roam the front yard. As Alayne and I stood and watched her walk around, we cried. It was the last time she would be coming home from Burlington.

Right up through Saturday the 5th, Widget was still out cruising the front yard, sniffing around and enjoying being outside. On Sunday, though, something changed. Her energy level dropped. She seemed to have a little difficulty swallowing, though she would still eat and drink. On Monday, she wasn’t able to rally, and she spent the day sleeping in the living room, not engaged in anything. She wasn’t really interested in food. She was resting comfortably, but we recognized’the time had come. On Tuesday, our local vet, Dr. Chris Plumley, was kind enough to come out to the farm and euthanize her here. We held her and cried … and cried.

She was the first dog we’d ever flown in, way back in 2002, when Delta Airlines flew her from Syracuse, New York to Atlanta and on to Salt Lake City and finally Missoula. You can read her story here. But from the moment I let her out of her crate in the Missoula airport late that night, I knew our life had changed. We don’t really know when she was born, but she was very young and we always figured she was probably about a year old when we got her. She outlived every other animal we’ve had from that era except for Lena, our blind mare, who is now 22 years old and was the very first animal to arrive. (However, it?was absolutely in Widget’s nature’to think she could outlive a horse!)

As Alayne said last week, Widget “was the heart and soul of the sanctuary” all these years. Until she arrived, we had only been taking in disabled dogs from shelters and rescue groups in Montana and the nearby region. After Widget, they started coming from around the country.

She inspired us in other ways, too, including being the “mascot” for our first major fundraising project back in 2004: building a dog building at the Montana ranch we named “Widget’s House.” Except her view was, “People, it’s fine to use my name to raise the money for it, just don’t expect me to live in it.” And I don’t believe she ever did set foot in Widget’s House. Our own house was?her house.

This is one of our favorite photos of her, from 2008, and it captures her personality perfectly: 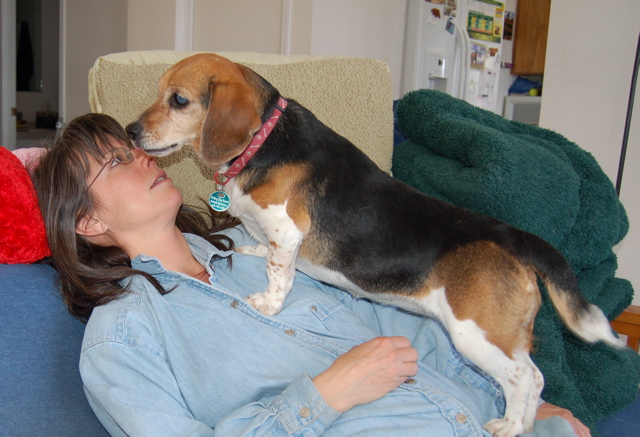 You can read the blog post about the photo here. She walked all over us for years, figuratively and literally, and we loved every minute of it.

Widget was also a sly and crafty food thief, and what we termed a “serial beggar,” but she had a face we just couldn’t resist: 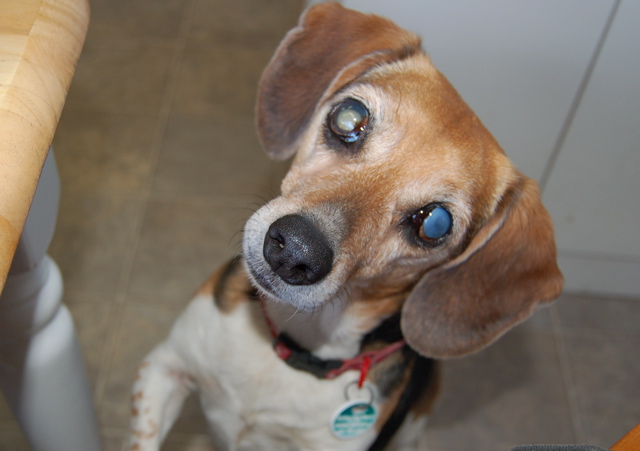 And of course, one of the many things we cherished the most about Widget was her distinctive “woo’s” — she had an entire language?all her own. Her wooing would vary in pitch, tone, volume, intensity and length, depending on her mood and needs. Here she is in December 2007:

Every morning here at the farm, I would climb the stairs up to her room and listen for the soft wooing coming from her crate on the other side of the door. She was saying, “Okay-you-can-let-me-out-now-thank-you…” When she thought we were late, the woo’s would be louder and more insistent.

There’s no more wooing coming from her room these days, and we get a lump in our throats every time we climb those stairs. But we are thankful that despite all of our grief and tears this past week, we’ve been surrounded by so many wonderful dogs who help take our minds off our loss. That includes our two most recent arrivals, Esther (now known as “Flopsy-Mopsy” for her endearing, raggedy-ann style of walking) and Stella (now known as “Stella Trotsky,” for her own endearing?way of walking). Both of those girls?have quickly captured our hearts. They, along with Darla and Aurora and the other special ones, will help carry on Widget’s legacy for us.

Here’s one last photo that we took a few weeks ago, on the evening of June 21st, the summer solstice: 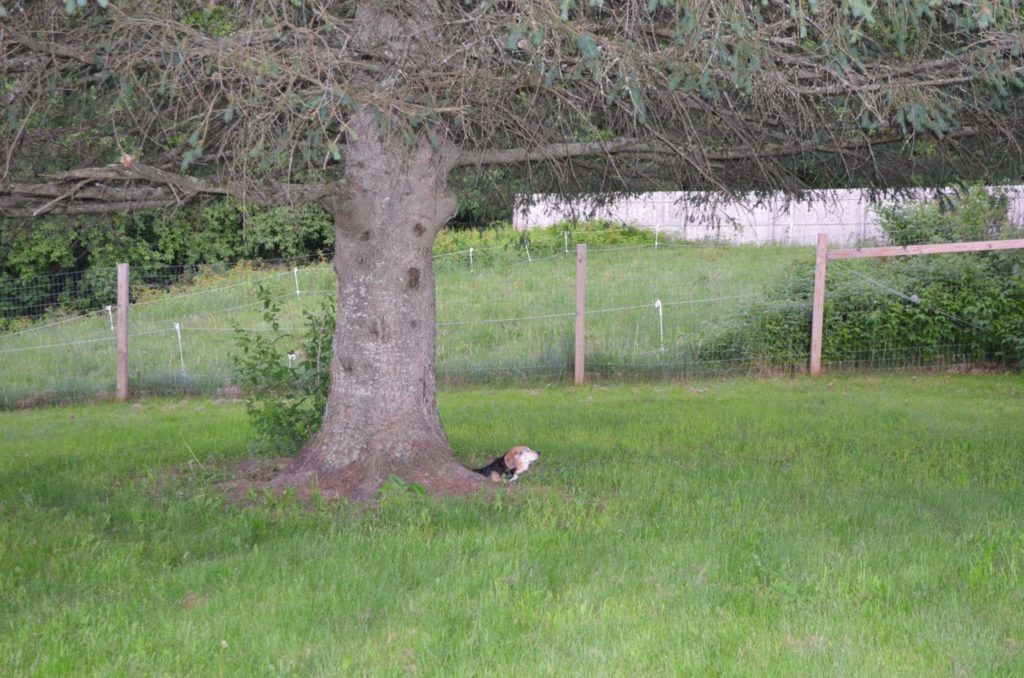 It was her last time “camping out.” She was living her life the way she wanted to, right up until the end.