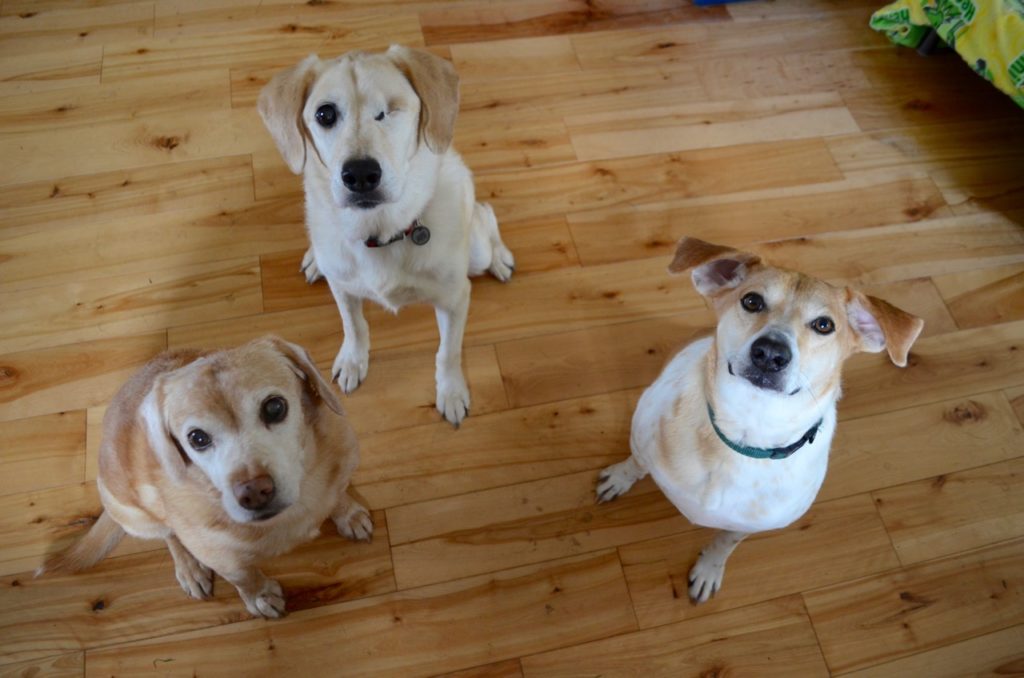 The beautiful Lab girl in the middle of that trio is blind Millie, who arrived from Texas last Thursday. In addition to being blind, she’s also diabetic. That apparently became too much of a burden for her family, who had decided to have her euthanized. Millie is only 8 years old, with perfect house manners and a loving, sweet personality. A family friend, who had known and grew to love Millie, was horrified at the idea of her being euthanized, and contacted us about taking her.

When we agreed, she rushed over to the family’s house on the same day, picked up Millie, and then fostered her for a few weeks until our transport could get there. The family knew their friend had reached out to rescue groups?and were fine with her making the?effort, as long as Millie went somewhere else.

Millie is … an amazing dog. An absolute doll. She’s affectionate (a real kisser!), well behaved, quiet, gentle and kind with everyone else in the house. Why anyone would want to get rid of her, let alone euthanize her, is beyond us. Yes, she’s blind, and yes, she needs two insulin injections a day, but’that should hardly doom an otherwise perfect dog. In any case, thanks to the family friend, Millie is now safe with us.

In an ironic twist, we learned from the vet records that came with her that Millie originally lived?here in New Hampshire — she had been adopted many years ago from a?rescue group (now closed) in southern NH, and moved to Texas with her owners in 2013. Now she’s back in New Hampshire!

We’ve already scheduled a full round of veterinary appointments for her with our specialists next week in Burlington — ophthalmologist, internal medicine, and radiologist.

The only dog who is not pleased?with Millie’s arrival is Darla. You see, Millie is something of a Daddy’s girl. Uh oh. That happened in the first 24 hours. I’m not sure why, but somehow she’s become my minion, and follows me everywhere. If I’m not around, she’ll stick close to Alayne, but otherwise she’s with me. In the living room, when I sit in my chair in the corner, she’ll come over, nudge my leg with her nose to assure herself I’m there, and then will lay down at my feet. As I write this, she’s been laying on the floor in my office behind my chair. When I was doing my work-out routine yesterday morning, she came and lay down next to me while I was doing push-ups. You get the idea.

Of course,?Darla is getting extra attention and loving so she knows everything is okay and no one has taken her place!

(In case you’re wondering what happened to the other Millie, she went to live at “Rolling Dog West” with our’third board member and longtime volunteer, Laura W. in Helena, Montana, as a companion for the other two disabled dogs Laura has.)

Millie is underweight — only about 40 pounds for a full-size Lab frame. Apparently she was only getting two cups of food a day, which just wasn’t enough. She’s definitely getting more nutrition now.

I took the photo at the top of the blog post yesterday evening in the dog wing. Amazing how a cookie held overhead can get three dogs to focus on a camera, huh? Tanner took the opportunity to show off?what he can do with his ears, helicopter style.

I took this photo of Millie this morning, right after letting her out in the front yard: 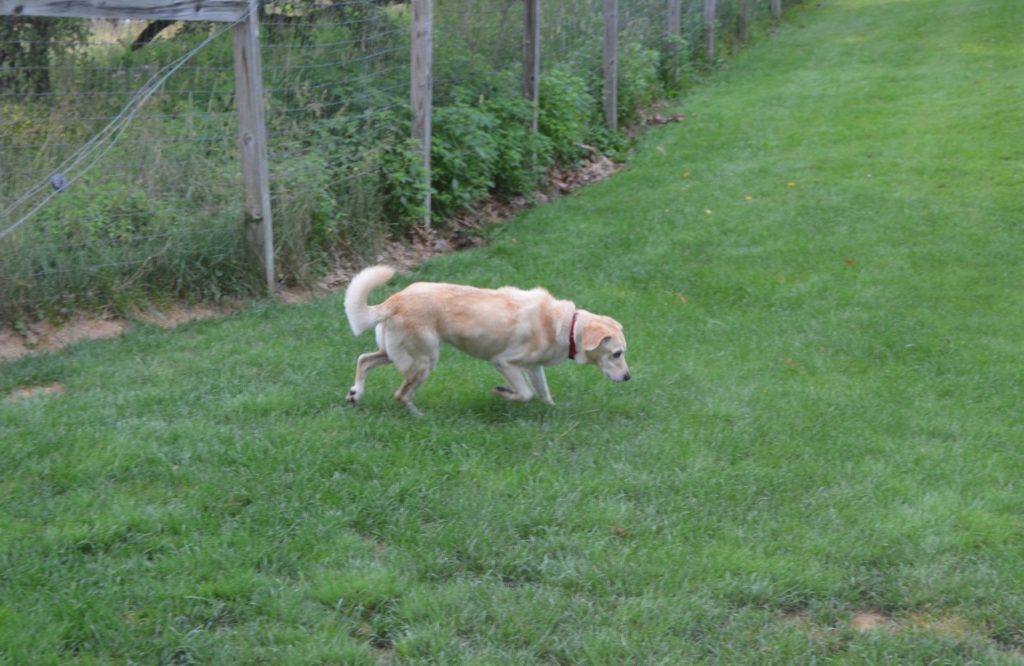 She’s not a big explorer or interested much in being outside. She will run out, circle around as she was doing here, then do her business … and immediately head for the ramp and into the house. She scratches at the door when she’s ready to come in. Millie just wants to be wherever we are.

And so now, that’s what she gets to do!