You are here: Home / Dogs / This Is What Lymphoma Looks Like 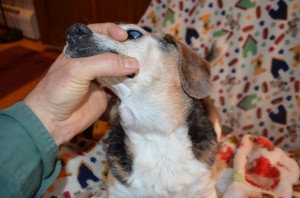 I began writing about blind Widget’s lymphoma since we first learned of her diagnosis last September. During her long treatment process we’ve had some ups and downs, but through it all Widget has been in amazing spirits and as bossy and feisty as ever. After she came out of remission in March we began new chemotherapy courses, but one by one her lymphoma proved resistant to each additional protocol. In April we had tried a third, and what we thought would be her final, chemo drug. It slowed the advance, but didn’t put her back into remission.

I took these photos this morning of one of Widget’s?lymph nodes. You can see just how large this thing is. What’s been odd is that this particular lymph node is the only one that has flared up like this. The node on the other side of her throat is just a fraction of this size. Our veterinary oncologist, Dr. Kendra Knapik, described this as “atypical” but not unknown. In fact, in some cases — in a younger, healthier dog who didn’t have the serious heart condition Widget has — surgery would be an option to remove it. But Widget is not a candidate for anesthesia. So far the size of this node has only affected one thing: Widget’s little woo-woo-woo’s no longer sound the same. They’re hoarser sounding. We treasured her wooing, and it was heartbreaking when she no longer sounded like herself, but that was?a very minor thing compared to everything else she was facing. It has not affected her breathing or swallowing or any other functions. Here’s another view: 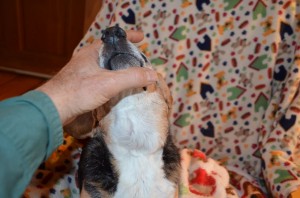 When that third “rescue” protocol failed in April, we spent a couple of weeks agonizing over what to do. The logical thing would be to say, “We’ve gone far enough, let’s stop here.” Our original goal had been to get Widget to Christmas. Well, the holidays came and went and she was still very much with us and doing fine. Our new goal was to get her to summer, so she could sit outside on warm evenings and camp out under her spruce tree again. (We’re almost there!) Most people don’t get as far as that third protocol anyway, Dr. Knapik said, so we felt pretty lucky. We watched Widget roam around the house, (hoarsely) wooing for her’servants to come running, and acting as if she still ran the place. We joked to Dr. Knapik that she must be sneaking some amphetamines into the chemo protocols because Widget had as much energy — and sometimes more — than she ever had.

We decided that if Widget wasn’t ready to give up, we weren’t either. She wasn’t acting sick, or feeling poorly, and it just seemed premature to sit back and let the lymphoma overwhelm her. During this time I?also learned about an experimental chemotherapy drug for canine lymphoma that is currently undergoing research trials. I contacted the company to see if we could get Widget enrolled in the trial or at least treated with the drug under a “compassionate” use provision. I hope to have more to report on that next week, but that gave us a “stretch?goal” to keep her thriving until we could get access to that new drug.

In the meantime Dr. Knapik has tried additional “rescue” protocols. None have sent her?back into remission, but they do seem to have bought her some more time by slowing the advance. Of course, this could change overnight. And there’s another danger: For months now Widget has had a bladder infection from rare bacteria that have?proven resistant to most antibiotics, so?part of her regular testing involves urinalysis and urine cultures. Because her immune system is suppressed by the chemotherapy, she is always at risk for the bacteria to get out of control. Thus?far the antibiotics have worked to keep the infection at bay, but it’s a tricky?balance: treating the lymphoma without suppressing her immune system so?much that it can’t help the antibiotics do their job. In that case she could die from a runaway infection. And every day we run the risk that her heart condition could do her in before the cancer does.

It’s been a roller-coaster, and the ride’s not over yet.