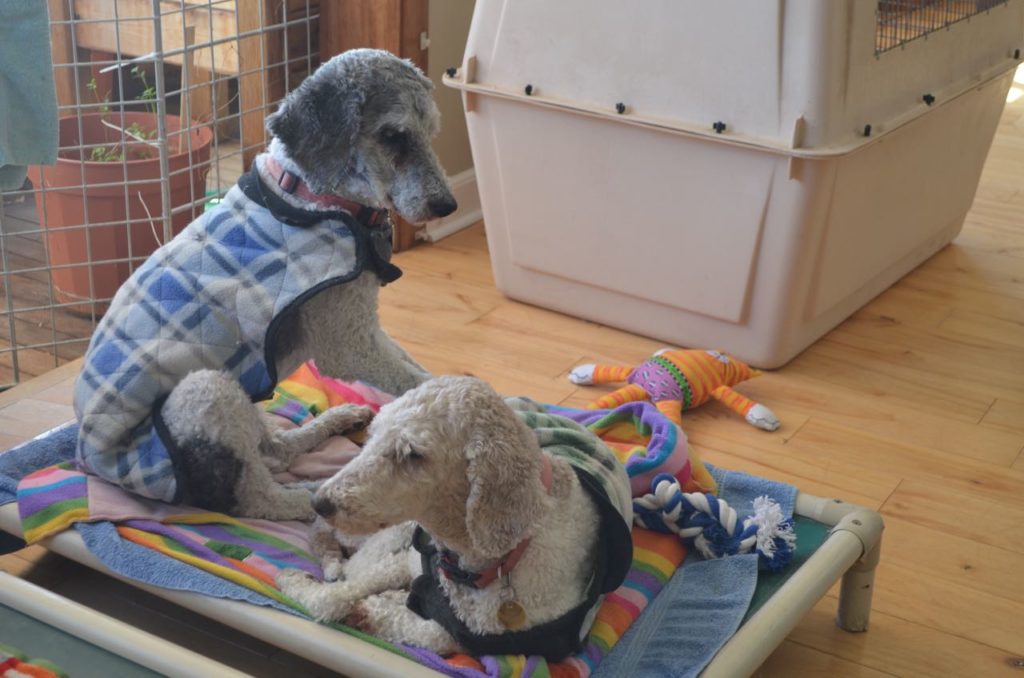 Long-time blog readers may remember these two girls — the blind Poodle sisters, Molly and Priscilla. They came to us way back in 2008 when we were in Montana, after being rescued in awful condition from a puppy mill situation in Texas. (A photo in that blog post will show you the shape they were in originally.) They made the move with us from Montana to New Hampshire in 2010, and then in 2011 we adopted them out to a couple in southern New Hampshire.

We received periodic updates and photos of the girls with their new family, and just assumed this would be their forever home. But several weeks ago I had an email from the couple, saying that one of their aging parents had cancer and they had to move out of state to care for them … and that they couldn’t take the girls along. They wanted to know if we could possibly take them back. Of course, we said yes, and a couple of weeks ago Molly and Priscilla arrived once again!

Rather than the spry, active things they were in 2008, they are now very elderly. It was actually quite a shock to see how much they had aged in the past six years. We never knew for sure how old they were when we first got them … our working assumption was they were young adults, but honestly, no one knew. Right now they both appear to be at least 14, if not older. Molly has definitely aged more than Priscilla, and it’s a very slow, stiff walk with her to go outside. But bless their little hearts, they adapted very quickly to their new routine. It seemed to take them only a few hours before they remembered where they were and who we were.

Their first afternoon here we spent a lot of time with them, just one-on-one, hugging them and making over them and doing our best to make sure they knew they were loved and safe. Above all, we wanted them to know they hadn’t been abandoned and were still with family who adored them. They’ve responded in kind, often seeking us out for petting, attention and, yes, dog cookies!