You are here: Home / Dogs / The Big and Not-So-Big 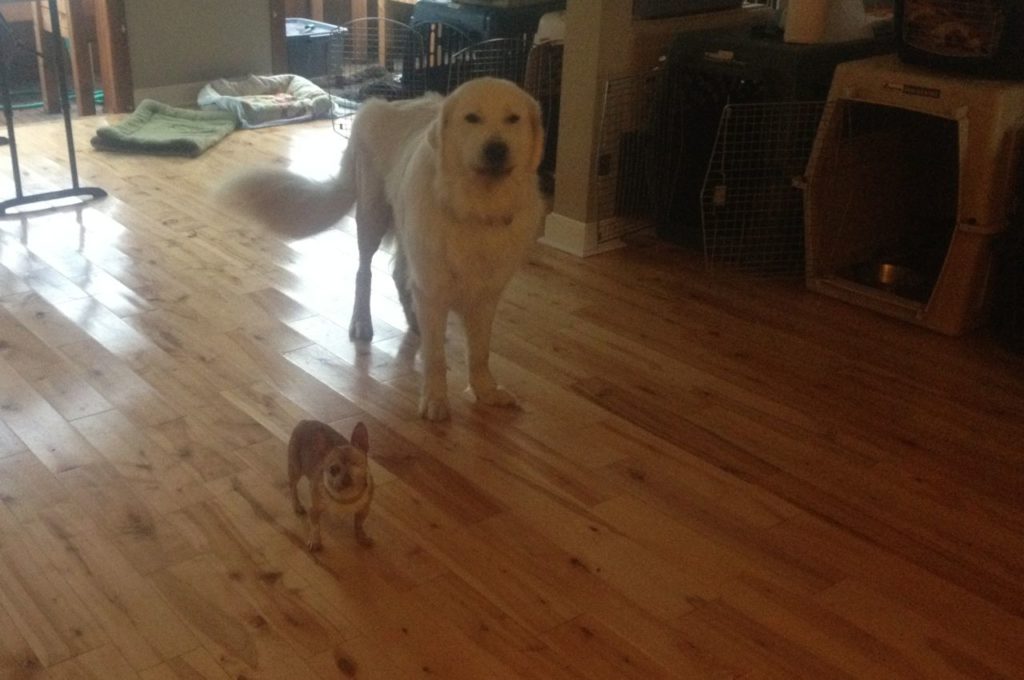 Sorry for the grainy photo … I took this with my iPhone quickly late last week before losing the side-by-side moment. That’s our big Maremma?Aaron, half-way through his 8-week long recovery from knee surgery, and Wilbur’the Chihuahua. The little tyke is quite the explorer, and every morning he makes his way down the hall from the “people wing” to see what’s going on in the dog wing. He is, shall we say, always underfoot, and despite his diminutive size, is quite fearless and never worries about getting walked?on.

Just before taking the photo, I had let Aaron in the back door to the dog wing, and Wilbur, true to form, was right there in the middle of the doorway, blocking the path. Aaron saw Wilbur standing there and carefully moved his 120 lb body around him to avoid stepping on him. It was kind of a sideways two-step then a step-over, and he was clear of the Chihuahua. Wilbur?followed Aaron into the room, which is when they both turned around and I took the photo.

Aaron, who has spent his entire life living with the other guardian dogs and goats in the barn, had never been around our disabled?dogs. But from the day we moved him into the house to recover from surgery, he has accepted them as his own pack. He knew they “belonged” here, and as long as he was here, they kind of belonged to him, too. He has been so gentle?with them, letting the blind dogs blunder into him and just standing and staring at them as they adjust their course. (They were probably wondering, “where did the white fluffy wall come from?”)

One afternoon last week deaf Esther, who doesn’t like being crowded, snapped at Aaron as he came through the doorway that she was blocking (a bit o’ Wilbur there). Looming over her, he simply turned his head away and walked on past, ignoring the snapping old lady. I was there when it happened and was horrified that she would do that to him; I scolded her but marveled at his generous nature in tolerating that behavior.

Aaron is one of the sweetest, gentlest dogs we’ve ever known. Indeed, he has casually walked right through a flock of our squawking chickens, sending them fluttering into different directions, and never pursued them. (Some guardian dogs are being trained to protect chicken flocks from predators.) Yet this benevolent, kind character becomes altogether different if someone or something “unauthorized” approaches his goat herd. Then he becomes fierce and protective and a dog you wouldn’t want to mess with. But he would never’think of ever stepping on a little Chihuahua.