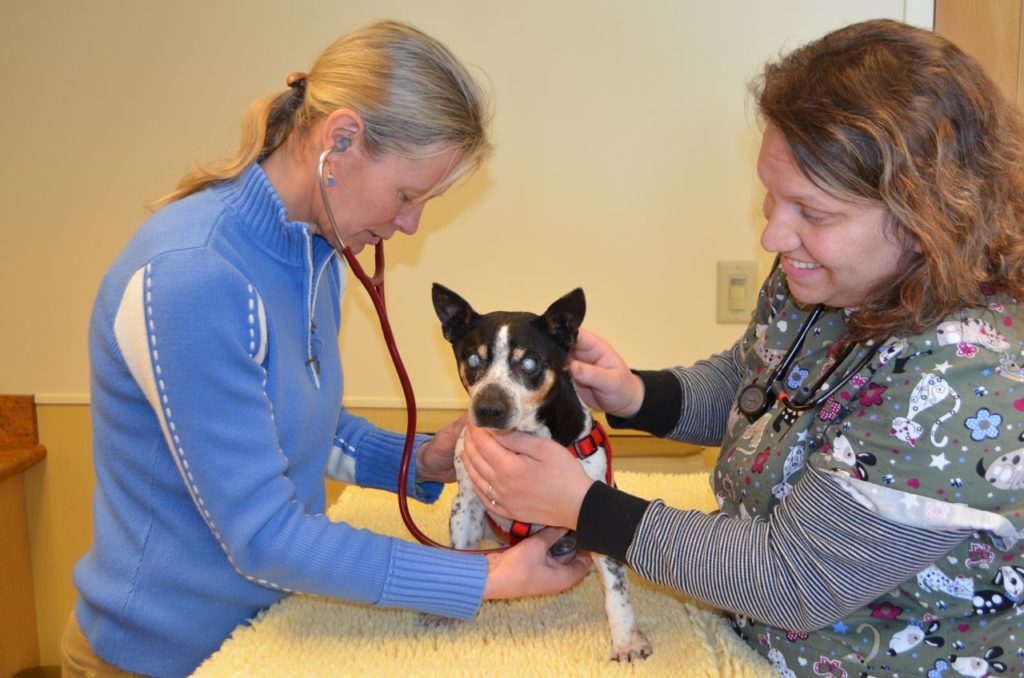 Last Thursday I took our new arrival, blind Taco, to Peak Veterinary Referral Center in Burlington for a complete work-up. In the photo above is our?internal medicine specialist, Dr. Marielle Goossens, examining Taco while vet tech Angie holds him. For a dog who lived his entire life outside, and was rarely handled, let alone petted, Taco proved to be amazingly tolerant and easy-going with everything that happened that day. The only issues on his basic blood work were?a couple of elevated liver values, and as a result, I will need to take him back in a couple of weeks for another test (bile acids) to determine what’s going on. We don’t have results on his tick-borne diseases panel or heart worm test, because those samples were held up by weather en route by?Fed Ex to the lab in North Carolina that is handling those particular tests. We should have the heart worm results?later today or tomorrow, and the other results by the end of the week.

Here is the radiologist, Dr. Lynn Walker, doing an abdominal ultrasound on Taco while vet techs Angie and Melissa hold him: 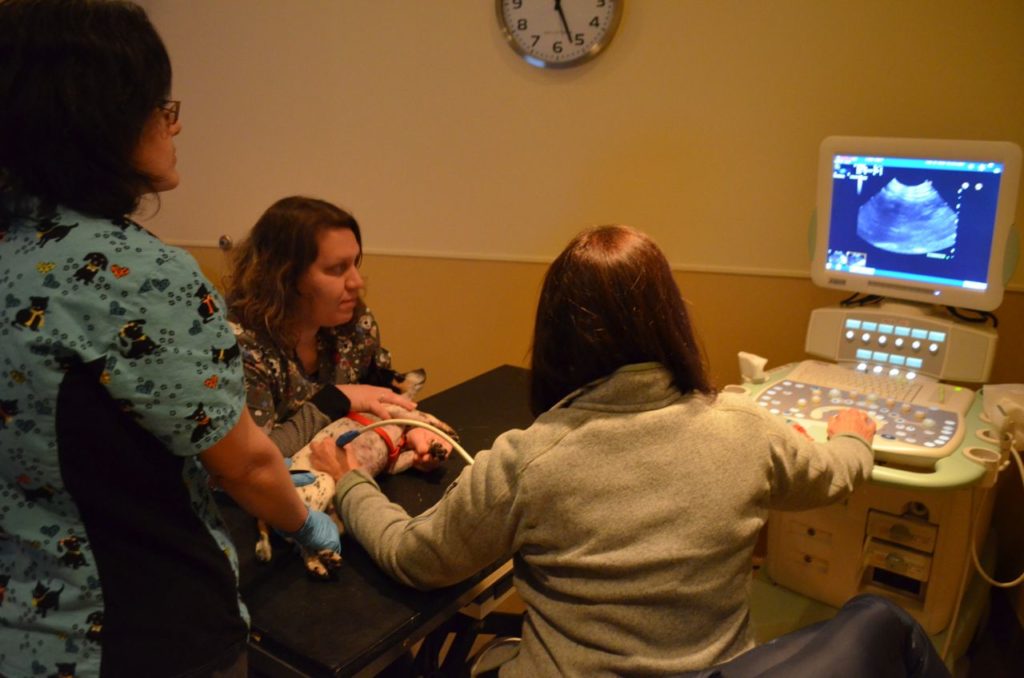 Overall, his organs looked in pretty good shape for a dog his age. No big surprises!

The cardiologist, Dr. Don Brown, was out of town so we didn’t get an echocardiogram on Taco yet. 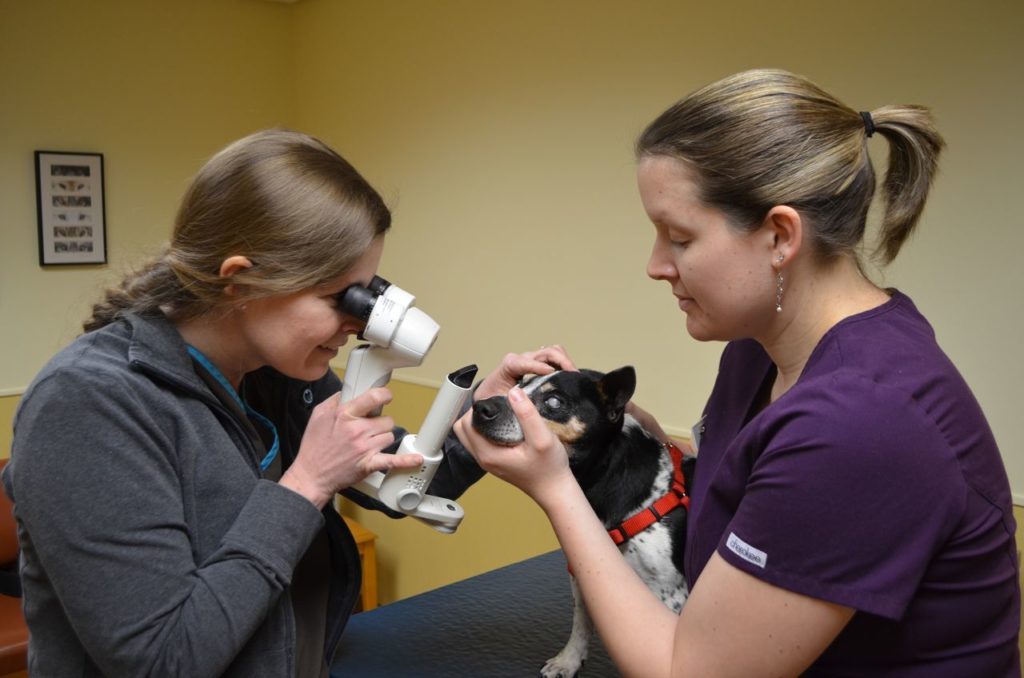 Sarah found Taco is?blind from hyper-mature cataracts and corneal decomposition. I had thought Taco had an old, untreated corneal ulcer in his left eye, but that turned out to be kind of an optical illusion, in a weird way — the grayness of the cornea (from the decomposition) on top of the hyper-mature dense cataract made it look like an old ulcer. The bad news is that he doesn’t have any pupillary light reflex, or PLR, which means his retinas aren’t working, and thus cataract surgery wouldn’t be an option … and even if it were, the corneal decomposition would render it pretty much pointless. The good news is that for now, his eyes are quite comfortable. All we need to do is monitor them for any changes.

Overall, a much better report on Taco than we were expecting. I’ll post more results when we get them.

Someone else was at Peak on Thursday — Darla was having her third mast cell cancer surgery. Yes, I discovered another new growth on her, this one on her belly that looked like a nipple. Here she was on Wednesday morning, looking typically relaxed and ever so comfortable in my chair: 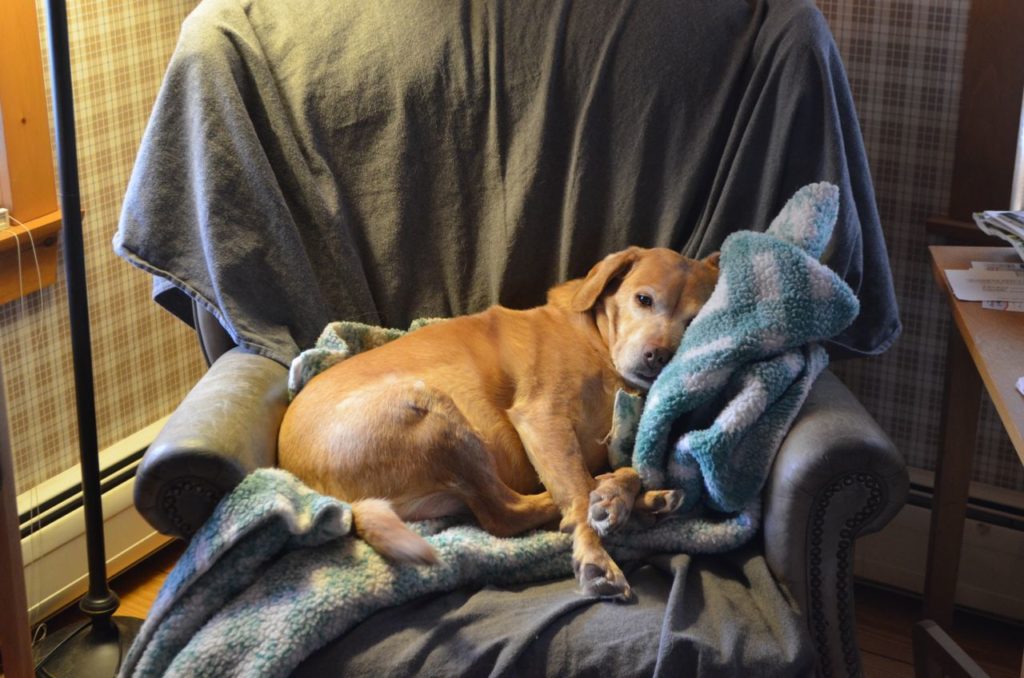 It certainly helped that she didn’t know she was about to go in for more surgery! She came through it just fine, however, and I brought her home Thursday evening. Even though she’s missing a nice little chunk from her abdomen, she’s almost back to her normal self.