You are here: Home / Dogs / Sunshine On My Shoulders 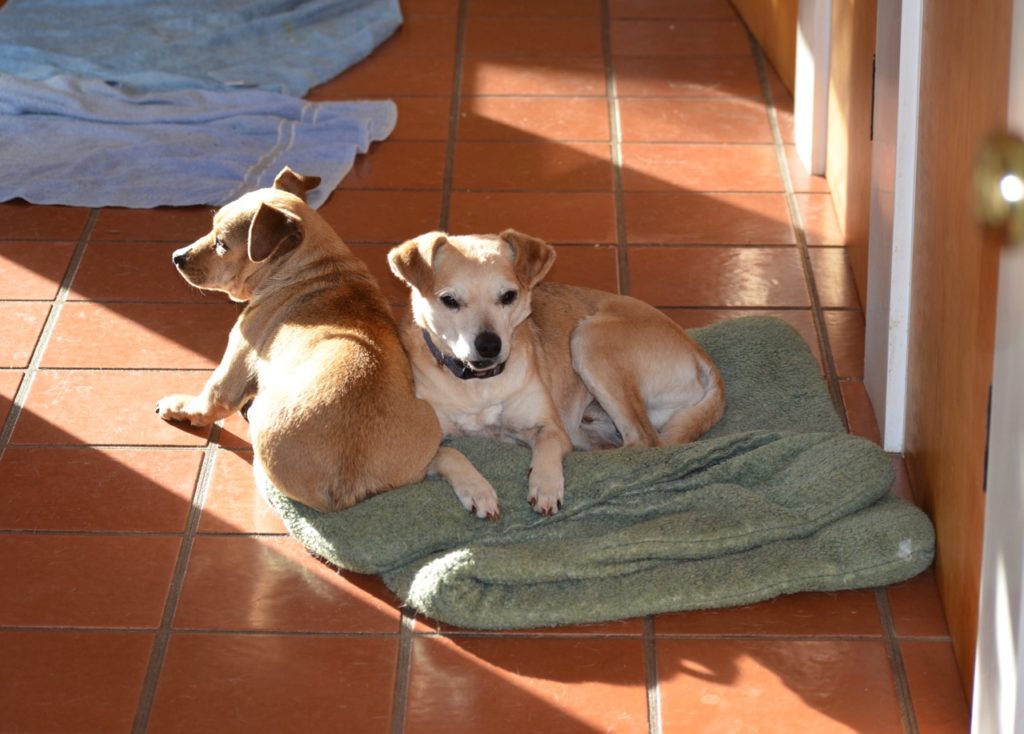 Alayne got this shot of Sunny and Bobby soaking in the warmth from a shaft of sunlight coming into the hallway. It just so happened the bed was in the right place at the right time! It’s the first time I’ve ever seen the two of them hanging out together, but that’s what warm sunshine will do for you.

Sunny is the one with the deformed right front leg, and the one we’ve always joked should have been named “Stormy” or “Cloudy-With-A-Chance-of-Showers” — anything but Sunny, which has never matched his dour personality. Bobby is the one who came to us from a bare-bones California rescue group?earlier this year after nearly 10 years of neglect there. We spent $4,500 at a California veterinary hospital getting him taken care of after we got him out of the rough environment he’d endured?for so long. It turns out he wasn’t blind, just suffering from a case of bilateral dry-eye that had never been treated, so his eyes were always crusted over.

And it’s Bobby we’ve been struggling with these days. He was always a little odd in his behavior, no doubt a result of all those years without socialization or human companionship. He seems to have aged dramatically in recent months, and you can see how old he looks in the face now.

We’re not sure if it’s doggie dementia we’re starting to see, but he’s begun to do really weird, troubling things — running up to other dogs while they’re peeing, and then lifting his leg and peeing on them. Yes. He pees on their backs, if they’re small enough like Sophie the Dachshund, or if they’re a larger female dog, like Millie or Stella, who has to squat down to pee. Otherwise, he just pees?on the legs of other dogs. We now have to keep a sharp eye on him when he’s in the yard with the other dogs to keep this from happening. He’ll see a dog start to pee, and he runs over to lift his leg on them. (We’ve seen a lot in our time, but never this.)?

Then, a week or so ago, he started doing this in the house. Tanner and Sophie were laying on a big foam bed together in the living room, and Bobby walked right up to them, lifted his leg, and started peeing. I was in the kitchen and saw it happening, so I yelled and he scurried off.

We don’t know what to make of his behavior at this point. If it’s doggie dementia, there isn’t much we can really do. At the moment we’re just trying to minimize the “opportunities” for him to do this … and hoping it’s a passing phase.

Which makes us grateful for little Sunny, whose own quirks really amount to nothing more than being a glass-half-empty kind of guy!