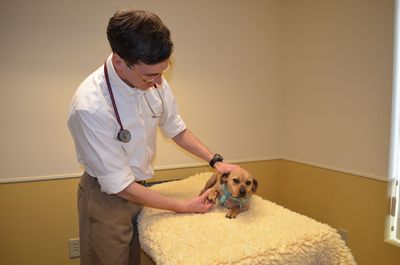 Along with Aurora and Widget, I took Sunny to Peak in Burlington yesterday for an overall evaluation. For one thing, we wanted the surgeon there, Dr. Kurt Schulz, to look at Sunny’s deformed front leg and help us decide what, if anything, to do about it. That’s Kurt in the photo above with Sunny.

We joke that Sunny’s name should have been “Stormy” or “Cloudy With A Chance Of Showers,” but Sunny was the name he arrived with, and his disposition has actually improved a lot since then. I was a bit concerned how he would do at the clinic, but he did fine. He was very shy and uncomfortable being handled, but he was a brave little guy about it.

After examining the leg and watching Sunny walk down the hall and back, Kurt recommended holding off on removing the leg until we got more weight off Sunny. He is a plump character, and though he’s been on a strict diet since he came, he still has quite a bit to lose. So we’re going to wait a month and see how he does. We don’t want to remove the leg if his overweight condition puts too much strain on his remaining legs.

And now that the snow is melting and bare ground is finally showing up once more, we’re curious to see how well Sunny gets around on grass, and whether he will develop any sores on that foot once he becomes more active. At the moment he doesn’t have any sores. It’s not a real foot, of course, as the photos in this blog post show. Kurt explained which bones Sunny was missing in the foot, and how that affected his use of that limb.

There is a possibility we might just leave the limb alone, but watching him lurch as he walks really makes us think he would be a lot more comfortable without it.

Our internal medicine specialist, Dr. Marielle Goossens, did a physical exam and took blood for a range of lab tests. Marielle also had the radiologist do an abdominal ultrasound, which showed all of Sunny’s organs looked good. The blood panels should be back today or tomorrow.

Aurora is doing fine. No more pain episodes, which is great news. Marielle sent blood and urine samples out to various labs yesterday to find out to what extent Aurora’s regimen of medications are reducing her risk of clotting. We should get those results coming back in over the next week.

Yesterday Widget had her first round of chemotherapy under the third, and final, protocol we are going to try. We should know by next week whether this protocol is working. Alayne and I are on pins and needles at this point. If this protocol fails, then we are essentially out of options and can only let time, and cancer, run their course.