You are here: Home / Farming / Spreading 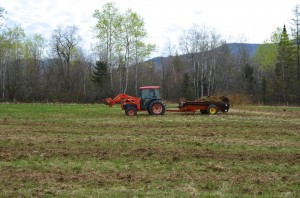 Alayne took this photo last week of me spreading manure and bedding from the goat barn. You can see how many of the trees had yet to bud out, which gives you an idea of how far behind everything is this year. Now, 10 days later, it looks very different — there are lots more leaves on trees and shrubs, and the overall impression is one of greenness, though many trees are still not fully leafed out yet even now. The oak in front of the house still has tiny little leaves on it this morning. The manure spreading had to wait until the pastures were dry enough to drive the tractor on them without leaving ruts, which meant we were behind on this project, too. Here’s what the bedding pack in the barn looked like: 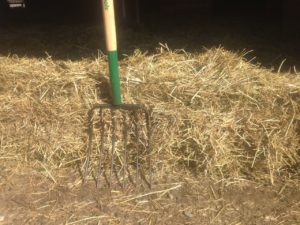 That was 16 inches deep at the edge, and probably 18 to 24 inches deep in the center of the barn, where the feeders were. This is wasted hay — goats are very fussy eaters, contrary to the myth that “goats will eat anything” — and is what’they have sifted through in the feeders, pulled out and dropped on the floor because … well, because there just might be something a little better in that flake of hay in the feeder! Horses and cows will do the same thing, too — this is not unique to goats at all, but they do tend to be choosier about sorting through the hay in front of them. Long ago I made my peace with this “wastage” when I finally realized that it doesn’t go to waste at all if you spread it back on the land. Particularly if you spread it back on the same land where the hay came from, because you’re returning organic matter to the field that was originally?removed?when the hay was harvested. (Some articles I read in Stockman Grass Farmer opened my eyes to this a while back.)

Moreover, in the process of sifting and sorting and then dropping hay on the floor of the barn, the goats create their own “bedding pack” that also captures and holds their manure and urine over the winter. We don’t have to go out and buy straw for their bedding (which, by the way, in many areas of the country these days is more expensive than hay!). As the bedding pack builds up, it creates an insulated layer against the cold ground, and keeps them warm and dry. Best of all, because the manure and urine is incorporated deep in the bedding pack and protected from the weather inside the barn, there is no nutrient loss from having rain and snow leach the good stuff out of it.

By contrast, when I spread the manure from the horse corrals that are out in the open, it’s pretty much only organic matter that’s going back on the fields — most of the nutrients have been leached out of the manure over the winter. (The manure inside their sheds still packs a nutrient punch, though.)

Here’s a fun fact you probably never wanted to know: Goat (and sheep) manure has the second highest concentration of nutrients of all livestock other than poultry. For example, fresh goat and sheep manure contains 19.5 lbs (8.8 kg) of nitrogen in each’ton of manure, versus 7.1 lbs for a horse, 11.2 lbs for a beef cow, and 16.7 lbs for a growing pig. Their manure is?also much higher in the other two main fertilizer elements, phosphorus and potassium. (Source is here.)

So when I clean the goat barn out in the spring and load up the manure spreader with the bedding pack, what gets spread out on the pasture is an incredibly rich, natural fertilizer for the fields. It took a total of about four straight days of cleaning and spreading last week between the goat barn and the horse corrals. I know it’s a little odd that I actually like spreading manure … there’s something satisfying about knowing we’re completing the fertility cycle. Of course, after the first day or two of spreading, my sense of satisfaction?gives way to “could we please just get this chore over with!”

With Memorial Day on Monday, I’ll resume posting on the blog next Wednesday.

Please note that I cannot help with technical or voting problems. I also do not have an inside track? to anyone at the Shelter Challenge, and I don’t know any more about the contest than anyone else does. So if you find yourself having issues, please consult their FAQ page and their Rules page.