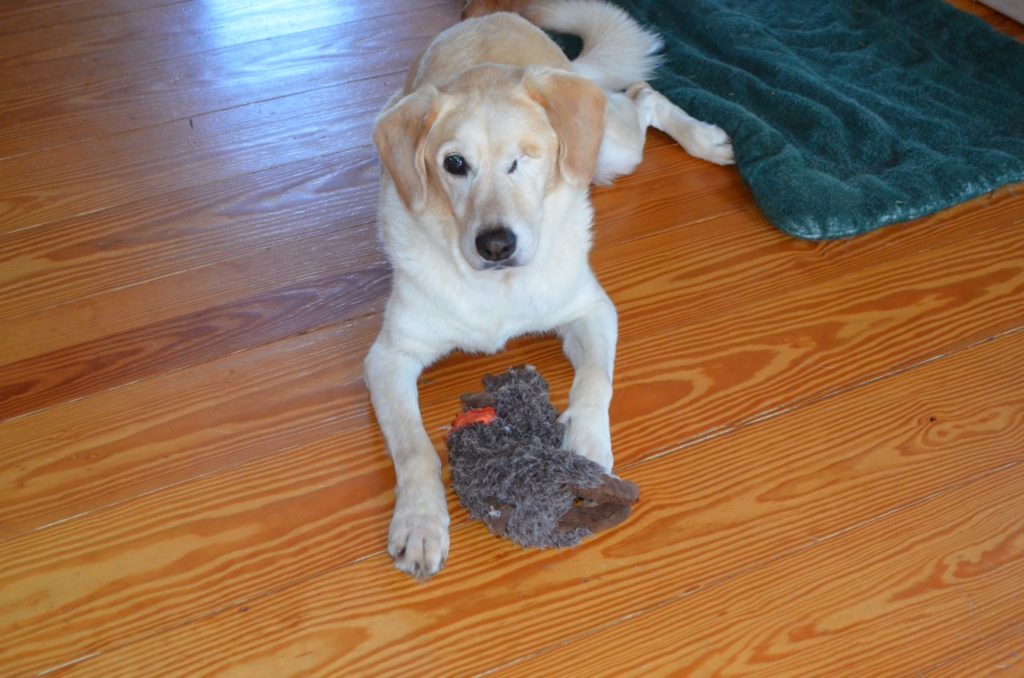 I mentioned in blind Millie’s arrival post that she had instantly become a “Daddy’s girl,” following me everywhere, laying down next to me wherever I was, sitting by the door and waiting for me while I’m outside. As I write this, she’s sleeping in the doorway to my office. Millie is definitely my minion, and I love it.

But, there’s trouble in minion-land. We discovered a couple of weeks ago that on those very rare moments when she’s not by my side, she’s up to something. Yes.

We learned this on a Saturday afternoon, when I had walked out of?my office and noticed Millie wasn’t with me or in the hallway outside my office. I went?downstairs, looked over at the kitchen, and saw a freshly baked loaf of bread on the floor, mostly eaten, and a very guilty looking Miss Millie slinking out of the kitchen.

I had baked four loaves of bread that day and they had been sitting on the kitchen counter cooling on racks. She had quietly left my office, sneaked downstairs and into the kitchen, and grabbed a loaf off the counter.

We have a set of doggie panels that blocks off the kitchen from the living room, but we had left the gate open as we often do — we haven’t had counter-thieves here in a while.

Here’s the (only) funny part of the story: Just before I went downstairs that Saturday to discover the bread heist, Alayne had been in the dog wing at the other end of the house cleaning crates, and Tanner had been hanging out with her. She said Tanner suddenly?heard something happen in the people wing, raced down the hallway to check it out, then came back all upset and atwitter. Alayne said she could tell Tanner’thought something was very, very wrong. That’s when I happened to descend the stairs and find the loaf on the floor. He must have seen Millie?in the kitchen eating the bread, realized this was a big no-no, and knew someone was going to be in big, big trouble!

So now we know that when my adorable minion isn’t with me, we’d better check out the kitchen!