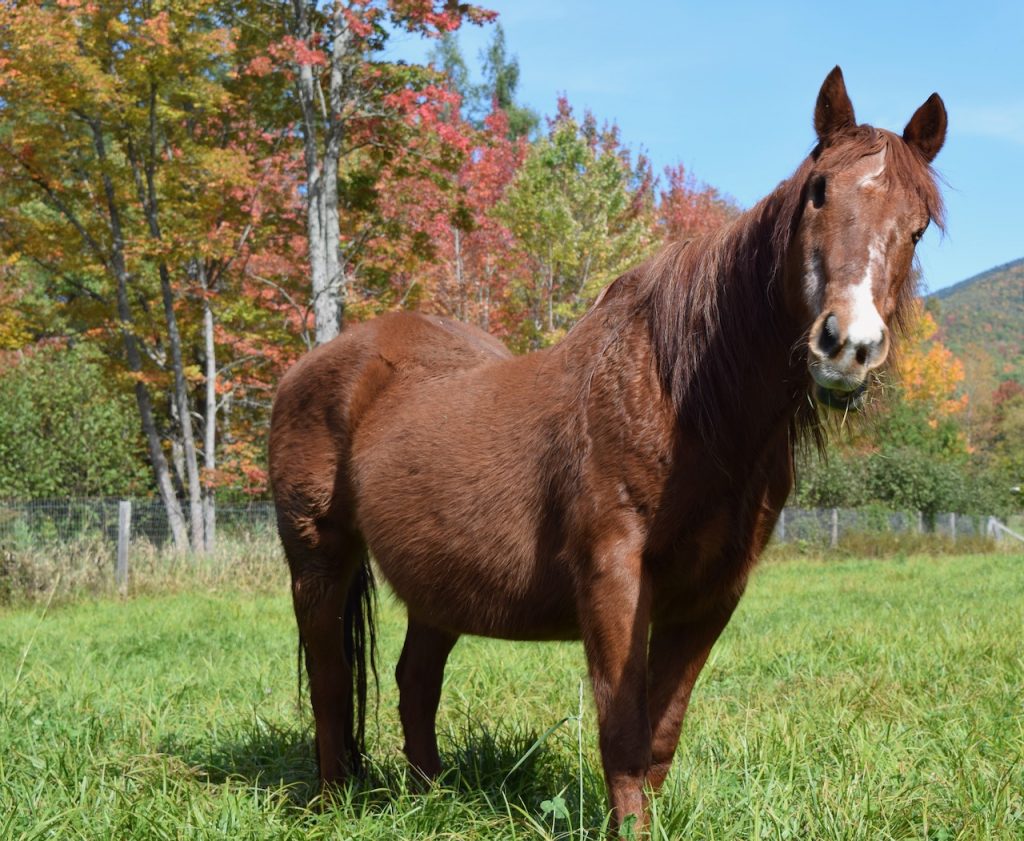 Longtime blog readers may remember that Lena was the very first disabled animal we ever took in, back in 2000 when we had just started this nonprofit rescue at our ranch in Montana. She was 8 years old at the time, a registered Quarter Horse mare who had been blinded by training abuse.

A so-called horse trainer had deliberately flipped her over backwards multiple times in an effort to “teach” her not to rear up on her rider. (We suspect it was more likely the rider who needed a lesson, probably because he or she was constantly pulling too hard on the reins.) The repeated blows from Lena’s head hitting the ground inflamed the optic nerve, causing her to go blind in both eyes.

By the time she came to us, Lena was skinny, frightened, and covered in literally dozens of scars and fresh wounds from having been picked on by the other horses in her herd. She’d been bitten and kicked, and run into barbed wire fences, trees, and other objects. She was a mess.

Unloaded into a corral at our ranch, Lena stood alone, trembling with fear, wondering what was coming next.

Well, fast-forward 22 happy years, and she turned 30 this past April. That’s roughly equivalent to about 85 years old for a human. Age comparisons between different species is not an exact science, of course, and factors like ill health and poor nutrition can influence longevity and thus these kinds of comparisons.

A study on aging among livestock in the journal GeroScience in 2020 noted that “Horses have an average lifespan of 20–30 years, with a maximum lifespan over 40 years.” So 30 years of age puts Lena in that equine elderly category for sure.

Other than being blind and having Cushing’s disease, however, Lena is in great shape. You can tell from the photo I took a few days ago that she is holding her weight well, and has already grown out her winter coat (a bit early … is that telling us something about the upcoming winter?). We manage her Cushing’s with a biweekly injection of a compounded medication called cabergoline. We resorted to this after Lena repeatedly refused to take the usual medication for Cushing’s — pergolide, a tiny pink pill — no matter how we tried to give it to her … in apples, muffins, molasses-flavored treats, in grain, you name it.

That same study in GeroScience also noted that “Elderly horses present with high rates of joint problems, dental and ophthalmologic issues, and neoplasias, in addition to general ‘aging’ phenotypes.” So we’re pretty fortunate that the only real medical issue she has is her easily managed Cushing’s. If you just watched her cruising around out on pasture, you’d have no idea you were looking at a horse of that age.

It seems only fitting that she’s been with us from the very beginning.