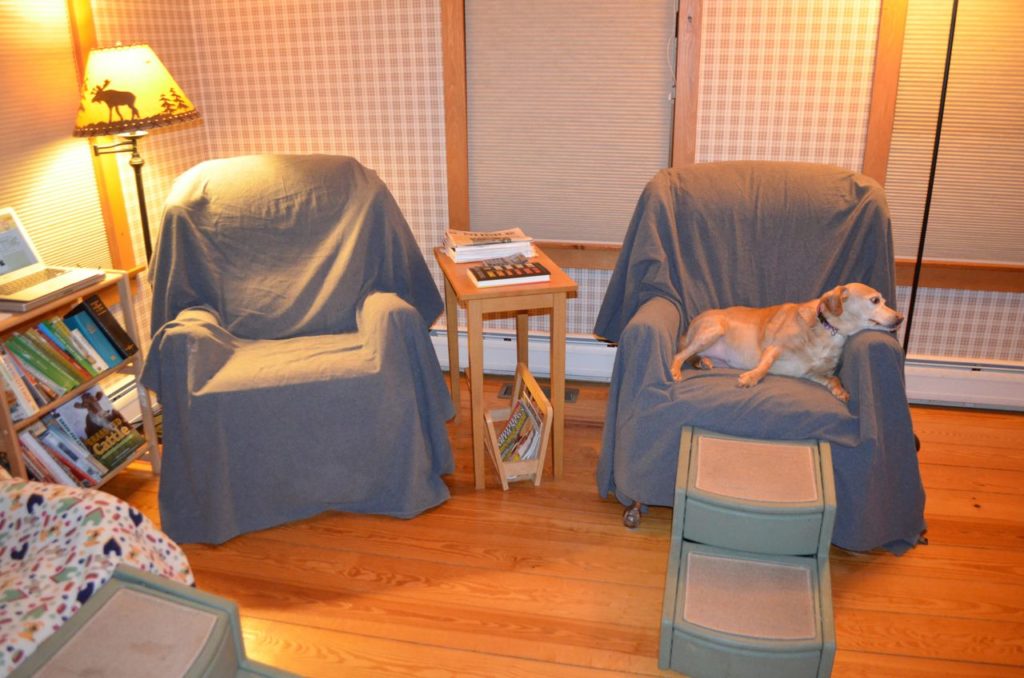 If you’ve been reading the blog over the past couple of years, you may recall the “Darla-in-my-chair” issue. We had two dog-free zones in the house — our bedroom and my old, beat-up but beloved recliner. Soon after Darla?arrived as a blind girl from Michigan in 2013, I walked into the living room one day and found her’sleeping soundly in the recliner. I didn’t have the heart to make her get down, and she took full advantage of my weakness. She decided she really liked that recliner, and it quickly became her favorite spot. I had to rewrite the rules so that only Darla had permission to use my recliner. (She went on to break plenty of other rules, this one just being the first. She had figured out that a certain someone was so smitten with her that she could — and did — get away with just about anything.)

But when I found myself having to bribe her to get out of my recliner so I could use it, I felt ridiculous. But better to feel ridiculous than the guilt I felt if I made her get out of the chair without giving her a treat. (I know: Commence eye-rolling.) It was clear that we had a problem: There were two of us, and only one recliner. Yes, that chair was 21 years old (!), yes the seat had been chewed up by Priscilla the blind Poodle several years ago, but dang it was still comfortable and it was where I really liked to sit and read in the evening. (Alayne to husband: “Why don’t you go sit in the corner and read?”)

It did eventually dawn on me that actually “we” didn’t have a problem. I had a problem. My favorite dog loved my favorite chair.

I convinced myself, with a little encouragement from Alayne, that it really would be okay to buy a new recliner after two decades of using the other one. That way I wouldn’t have to share, or bribe, or feel ridiculous or guilty. There would be a new recliner for me, and the old recliner for my girl. (I recall that some blog readers pointed out this obvious solution back in … hmm … 2013.)

So several weeks ago I finally ordered one, almost identical to the original. It arrived last Thursday. We re-arranged the living room so both recliners would be side by side, and I would still be in my corner, but in the new chair. I took that photo last night, and you can see that Darla is once again happily enjoying her recliner.

I suspect she was thinking, “What took him so long?”

If that was the happy news about Darla, I’m sorry’to say?we?also have’some upsetting news. The oncologist at Peak called last Tuesday to say the lab had run some additional, more detailed tests on the biopsy from?Darla’s latest mast cell cancer surgery (her third) and found mast cells had invaded a nearby lymph node. So what had been confined to dermal outbreaks was now a systemic problem. That, of course, is not good. On Thursday I met with the oncologist’to discuss Darla’s prognosis, and we decided to start her on a 6-month course of chemotherapy. She’s already had her first treatment and is doing very well. No side-effects at all. But please keep your fingers crossed for our beautiful girl.

In better medical news, blind Taco’s bile acids test came back with only mildly elevated levels, so right now all he needs is a daily liver support medication (Denamarin). We’ll recheck him in several weeks. So despite our fears, this little guy turned out to be in a great shape!