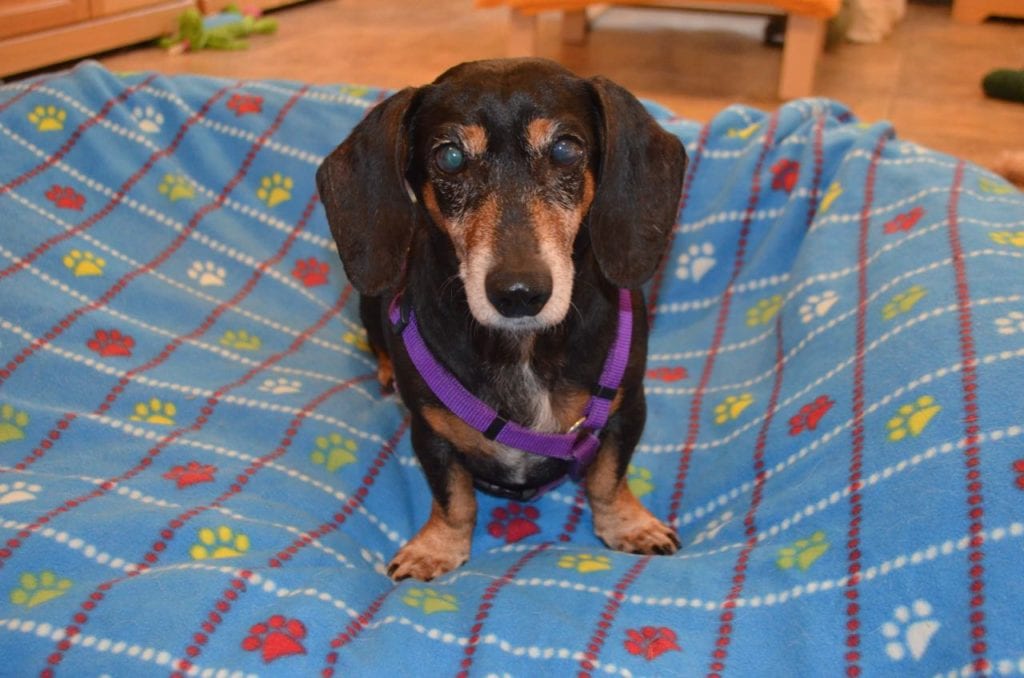 Here’s our newest arrival, a nine-year old blind Dachshund named Wally. He came last month from a shelter in Houston that had been trying to adopt him out since May, but without much luck.

Wally had his own family in Texas and was doing great … until the new baby arrived. It wasn’t long before his owners took him to a vet clinic for euthanasia, claiming he had bitten the baby (though they acknowledged the skin wasn’t broken and no blood was drawn) and also — we are not making this up — that Wally was having a hard time getting around the house now because of all the baby toys on the floor. The veterinarian persuaded the owners to surrender Wally to the clinic, rather than euthanize him.

Wally eventually made his way to a no-kill shelter in Houston, where he was a staff favorite. Sadly, though, no potential adopters stepped forward. We offered to give Wally a home with us, and the shelter happily agreed.

We had recently just lost our beloved Sophie, our blind Doxie girl who had been battling cancer, and for the first time in over 15 years, we didn’t have a Dachshund in the house to boss us around. So we were delighted when Wally arrived to bring some much needed Dachshund-ness back into our lives. (Doxieholics know this condition. There is no known cure.)

He is a very sweet boy, loves to be held and cuddled, and gets along wonderfully with everyone. I will often be working at my desk when I feel a pair of Dachshund paws on my chair — it’s Wally, standing up on his hind legs, trying to get into my lap. I will pick him up, let all of his 24 pounds sit on my lap for a while, then put him in his oval bed that’s next to my desk.

We took him to our veterinary ophthalmologist in Burlington, Dr. Sarah Hoy at Peak Veterinary Referral Center, a couple of weeks ago for a complete eye exam. Unfortunately, she found Wally is blind most likely from SARDS, or Sudden Acquired Retinal Degeneration Syndrome — the “syndrome” meaning they still don’t know what causes it. Thus there isn’t anything we can do to restore his vision. But Wally is a smart boy, and within 24 hours of arriving here, he was already finding his way from the dog yard, across the deck, and up the ramp to the back door. His first night was a version of “bumper cars,” but by the next day, he had mapped the house and knew his way around.

This week I’m taking him back to Peak for a full “senior screen” — blood panels, abdominal ultrasound, X-rays, and examination by our internal medicine specialist, Dr. Marielle Goossens.

The morning after Wally arrived, it was 24? (-4? C), so after his first potty outing of the day, he headed straight for the wood stove: 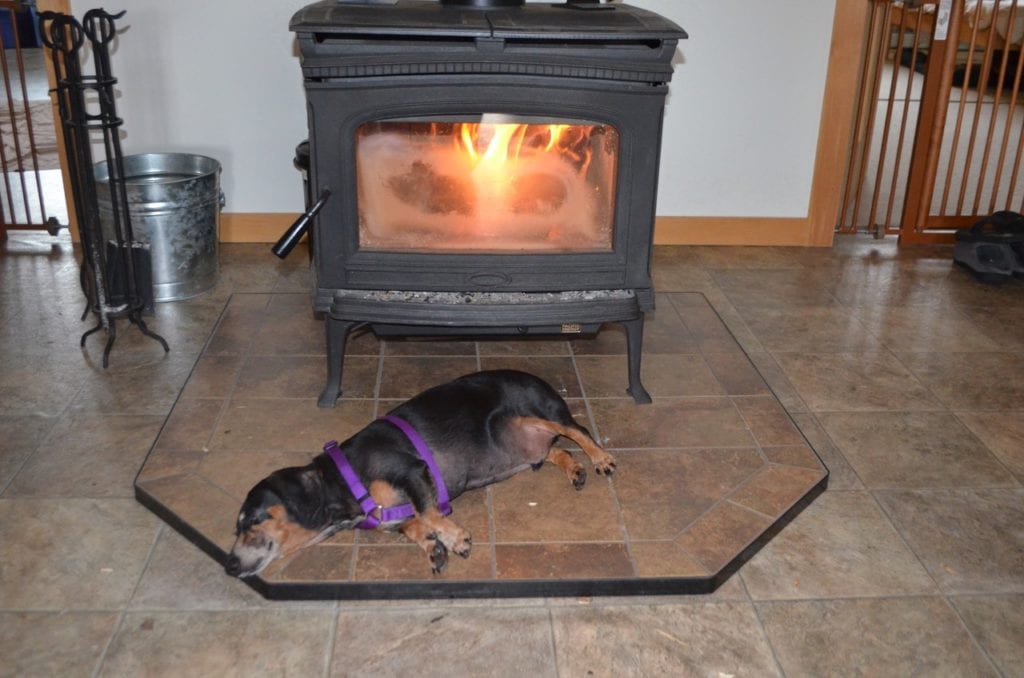 We’ve never known a Dachshund who didn’t love to be near the wood stove in winter!

When he’s not in front of the stove, Wally’s doing the usual Dachshund burrowing thing like this: 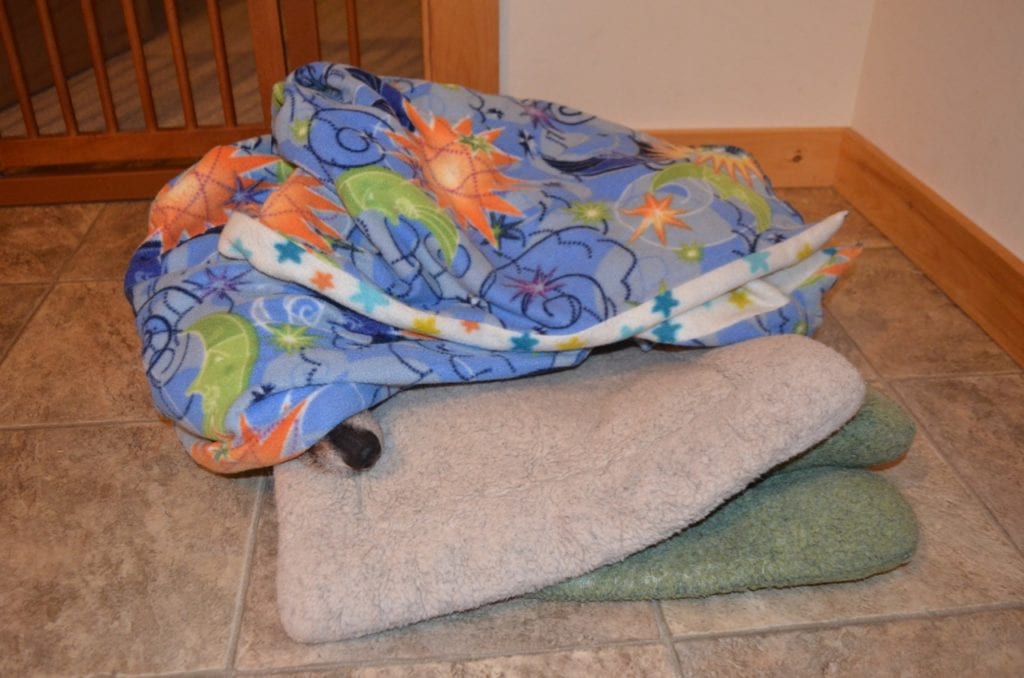 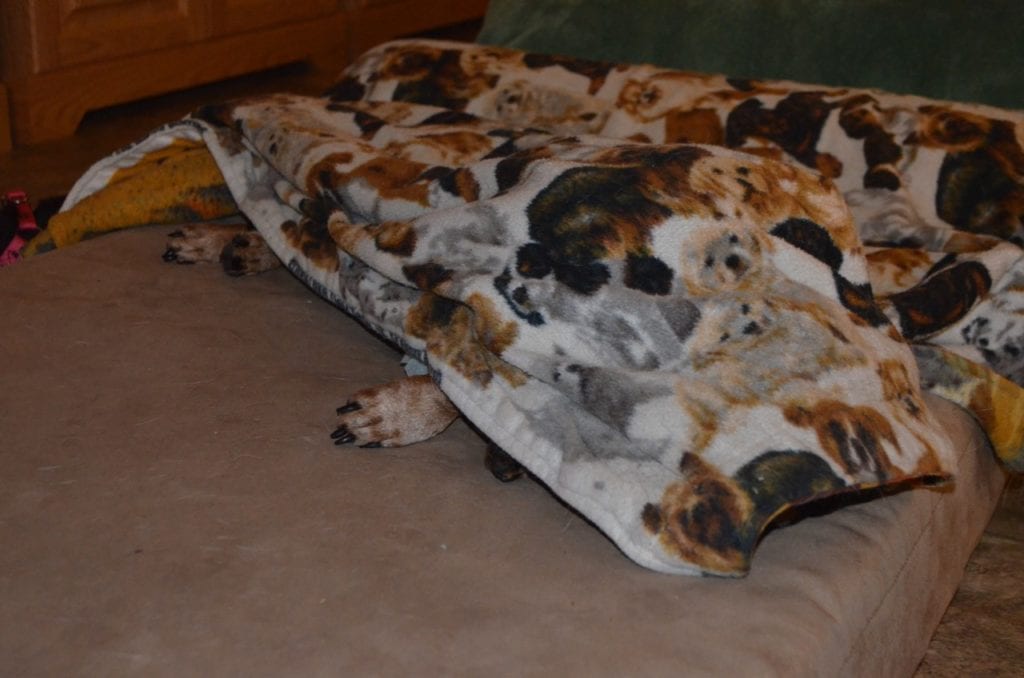 At other times, though, he is actually on top of a bed — here he is with little Mildred: 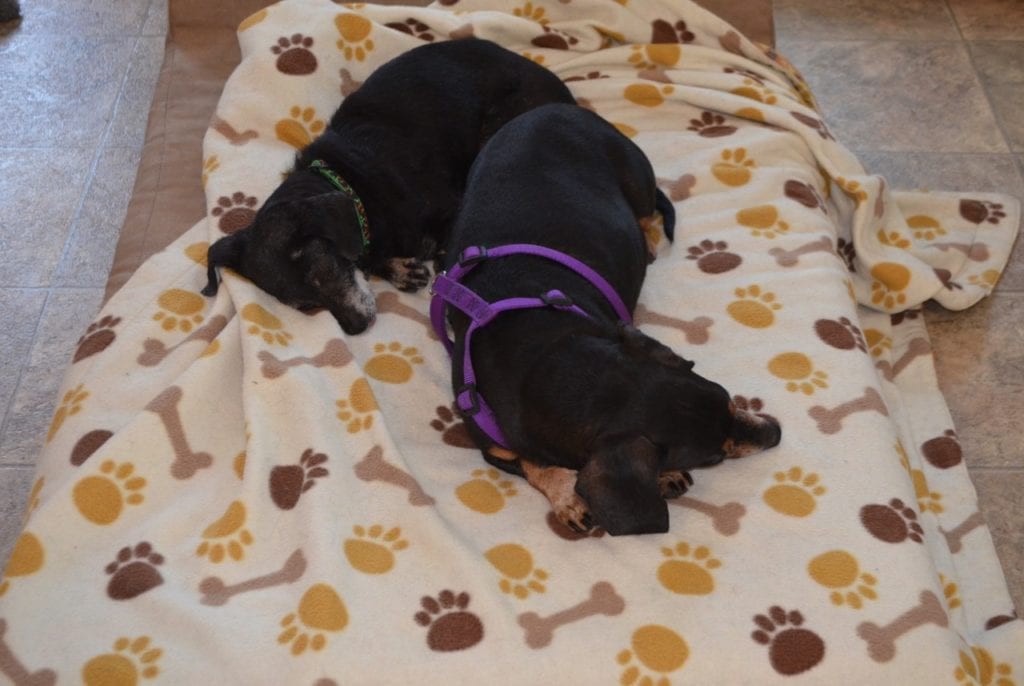 So with that, please welcome Wally!