You are here: Home / Uncategorized / Please Welcome Harley and Jake! 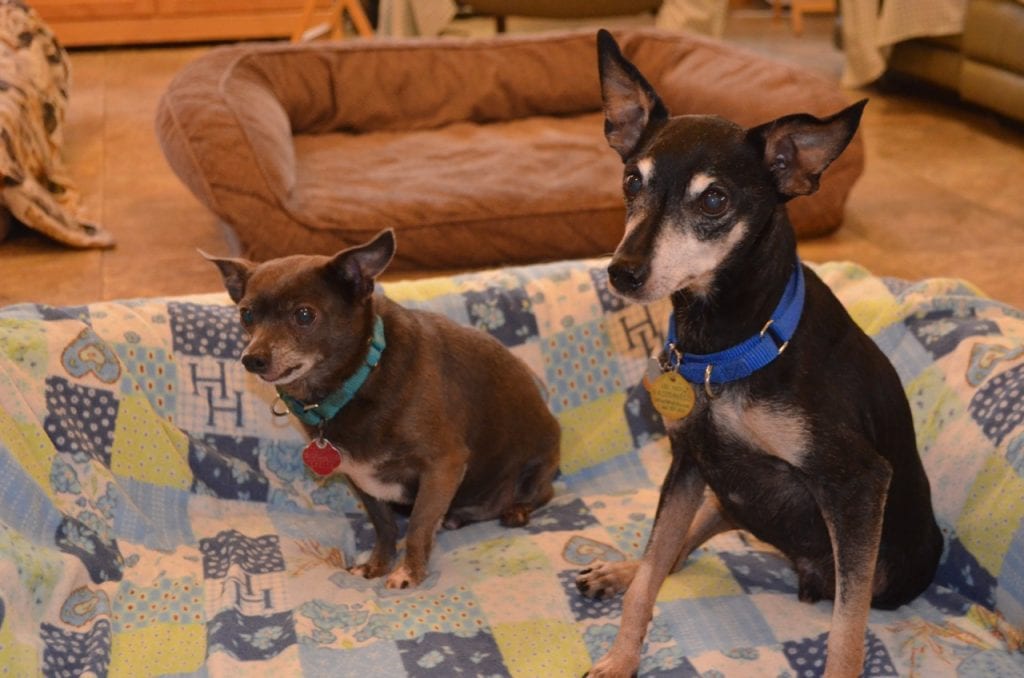 These little tykes came to us recently from our friends at Riverside Rescue in Lunenburg, Vermont. Jake is the Chihuahua on the left and his friend Harley, a three-legged Min Pin, is on the right. They both belonged to a woman in the area who had ended up in the hospital and could no longer care for them. Jake is 8 years old and Harley is quite the senior at 13. The boys had received only the very basic in veterinary care in the past several years, and by the time they got to us they needed quite a bit of attention.

Our primary care vet did a dental on Harley and ended up removing every one of his teeth … several the vet could just pull out by hand. Harley also had an oral fistula (an opening from the mouth into the sinus cavity) that the primary care vet was not able to fix, so we took Harley to a veterinary dentist at Burlington Emergency and Veterinary Specialists (BEVS) in Vermont for follow-up work. That dentist actually found a second fistula in Harley’s mouth and repaired that one, too. He’s now been hospitalized twice at BEVS for dental work, but we think we have all his dental issues resolved now.

When Harley came to us we suspected he had Cushing’s disease because he was peeing a lot, drinking a lot, and his hair coat was pretty rough. Sure enough, he tested positive for Cushing’s and is now on twice-daily meds for that. (His glucose is normal and he’s not diabetic.)

Harley is also very weak in his remaining right rear leg. We’ve had many three-legged dogs over the years, missing both front and rear limbs, but Harley is the most compromised we’ve seen so far. He struggles to get over inch-high rails along the floor for doggie gates, and sometimes it’s an effort for him to walk up the gently sloping ramps from the dog yard to the house. Harley will just sit down and wait for us to go pick him up. Yet other times he scampers around the yard and then makes his way up the ramps with no problem at all.

Given what we’ve seen, though, we had our orthopedic surgeon at Peak in Burlington evaluate Harley to see what the problem is with that leg. It turns out Harley doesn’t have any specific issue — not a joint problem, not a torn ACL, nothing for which there is a surgical or medical fix. The goal now is to simply support and strengthen that leg. So our surgeon is working with another orthopedic surgeon in Virginia who creates custom-made orthotics for dogs. The orthotic will be based on measurements made during a CT scan of Harley’s rear leg. We should have the device in several weeks and will see then if it provides enough support. Harley does not need a wheelchair at this point … he is very active and mobile, and he would find a wheelchair confining. We’re just looking to give him more support for that leg.

Jake is overall quite healthy, and his blood work was perfectly normal. But his mouth was a wreck. The last time we had a primary care vet do a dental on a Chihuahua several years ago, our little Wilbur, the vet ended up breaking Wilbur’s jaw trying to get teeth out, and also left roots in (this last part we found out only after subsequently taking Wilbur to board-certified veterinary dentists in Massachusetts, whose dental X-rays showed the roots left behind). Even though we’re using a different primary care vet now, we weren’t going to run that risk again with Jake. So we took Jake to the veterinary dentist at BEVS, who had to remove all of Jake’s teeth except his two lower canines.

These two are real characters, full of personality. Jake is a complete lovebug … a bit shy at first, but he races over for his share if he sees another dog getting loved up. For a plump little Chihuahua, he’s incredibly fast … we call him “Rocket Man” because of how fast he runs down the ramps to the dog yard and back to the house. He actually likes to roughhouse with me when I get down on the floor. Jake will run circles around me, do play-bows, and skitter back and forth while I pretend to chase him.

Harley is a more complicated personality. He’s very affectionate and loving with Alayne and me, but he can be jealous of the other dogs. Sometimes he growls and snaps at them for no reason in particular. Harley is lucky he lives in such a friendly, forgiving group of dogs, but this means we do have to manage his interactions and can’t leave him unsupervised with the other dogs (except for Jake). Nevertheless, he is a very sweet dog who can give us an adorable look that melts our hearts. Harley says, “Yeah, I can be a bit of a growly bear but you guys love me anyway!” It’s true!

So thanks to Riverside Rescue for taking these two boys in and asking if we could help with them. Harley and Jake have really endeared themselves to us in the short time they’ve been here.