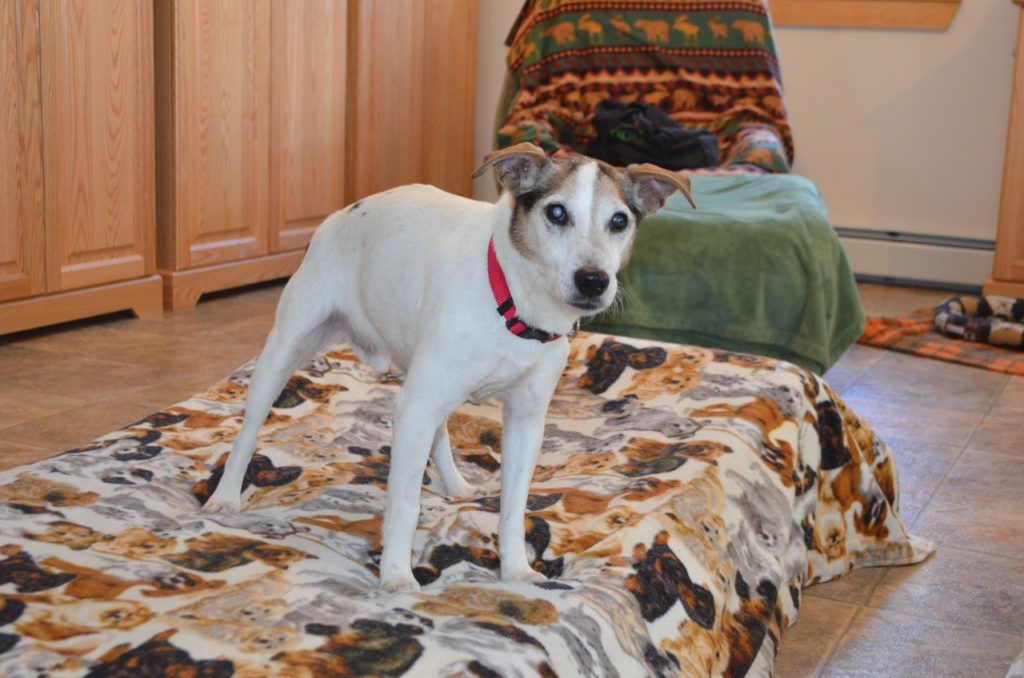 A staff member from Seattle Humane emailed us a few weeks ago to ask if we could take a 15-year old blind Jack Russell terrier who had been surrendered by his owner. We don’t know the circumstances, but after having had him since he was a puppy, his owner had decided it was time to turn him over to a shelter. Our hearts broke for this little guy. We agreed to take him. It wasn’t long before our transport company, TLC Pet Transport, was picking him up and bringing him out to us in New Hampshire.

His name had been Tank, but he just didn’t look or seem like a “Tank,” so we decided to call him Hank instead. Since he’s mostly deaf anyway, this didn’t seem to matter to him!

Hank’s a very elderly fellow, slow but steady in his movements. He gets along well with the other dogs — when he comes across one of them, his short little tail just wags like crazy. But he doesn’t play with them … Daisy’s tried to get him involved, to no avail … yet he seems comforted by their presence nonetheless.

He’s done surprisingly well navigating around the house and figuring out his new environment. Sometimes, though, he gets stuck behind doors, and we often take him over to the water bowls just to make sure he’s getting enough to drink. Hank’s got a great appetite, fortunately, and otherwise seems quite healthy. Based on his original vet records, which Seattle Humane was able to send on to us, it appears he went blind from cataracts in just the past couple of years.

Last week I took him to see our veterinary ophthalmologist in Burlington, Dr. Sarah Hoy, for a thorough eye exam. We also wanted to find out if he might be a candidate for cataract surgery. Here’s Dr. Hoy examining Hank while her vet tech Angie holds him: 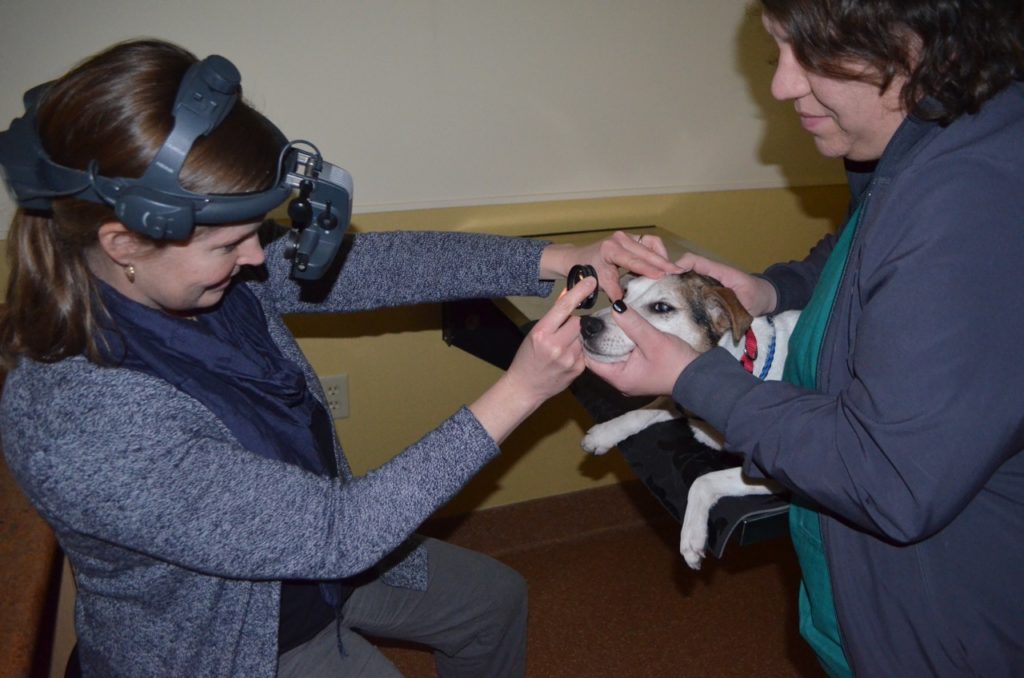 Though it initially appeared like his right eye still had some visual capability left — he showed a dazzle reflex, for instance — Dr. Hoy performed an electroretinogram, or ERG, to test his retinas, and sadly neither one was working well enough. This meant surgery was not an option. All we can do now is monitor his eyes and keep them comfortable.

We realize we may not have him for long, given his age, but we will do our best to make sure he knows he is loved and cherished. 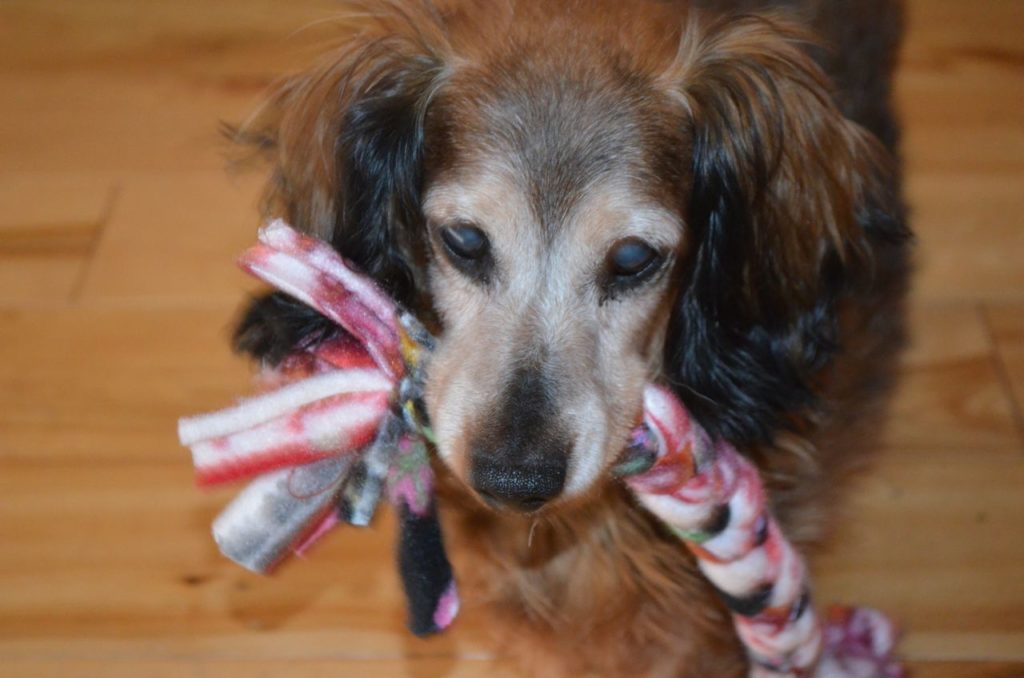 We had recently done routine blood work on Sophie, who’s also diabetic, and the results showed some mildly elevated liver values. I already had blind Millie, our diabetic Lab, scheduled for an upcoming ultrasound, so I asked our internal medicine specialist at Peak in Burlington, Dr. Marielle Goossens, if we could add Sophie to the ultrasound roster that day.

I was in the imaging suite holding Sophie for the radiologist’s scan when I noticed something odd-looking on the screen. Now, most of the time I can’t tell what’s what on an ultrasound screen, but I could tell something wasn’t right with this “thing” I saw. The radiologist said, “Nope, that’s not supposed to be like that.” It turned out to be a pelvic lymph node that was inflamed. Literally within a minute of discovering it, Dr. Goossens walked into the room, and the radiologist told her what he’d just found. After the imaging, Dr. Goossens did a physical exam on Sophie, and that’s when she found the small growth. If you read the ACVS write-up, you’ll see they mention this tumor can spread and metastasize to surrounding tissue even while it’s still very small and almost undetectable itself.

So … we quickly had follow-up consultations with the oncologist, surgeon, and cardiologist (to make sure Sophie’s heart was okay for surgery). As if that wasn’t enough, in the midst of all this Sophie developed a melting corneal ulcer in one eye. Dr. Hoy was busy treating her for that, too.

We reviewed the options we had, which were: 1) do nothing; 2) surgery to remove the tumor and metastasized tissue, followed by chemotherapy; or 3) palliative chemotherapy. After more discussion with Sophie’s doctors, we decided to proceed with Option 2.

The surgeon at Peak, Dr. Kurt Schulz, did the operation on her last Wednesday. It took a couple of hours because he had to open her abdomen first to clean out the lymphatic tissue, sew that up, then turn her over and remove the growth next to her rectum. It’s a very tricky procedure, but ultimately it went well. Alayne drove over to Burlington on Friday to bring Sophie home. Our biggest challenge is just keeping the incision site on her rear end clean, because it is literally right along her anus, so you can imagine the hygiene issues. The surgery, combined with the various medications and antibiotics she’s on, have also given her some recurring diarrhea, making it even more difficult.

But, Sophie is bouncing back, is eating with gusto, and is doing much better than we thought she would be so soon after major surgery. She will return to Peak in two weeks for suture removal. She will begin the chemotherapy then. Please keep this little girl in your thoughts.