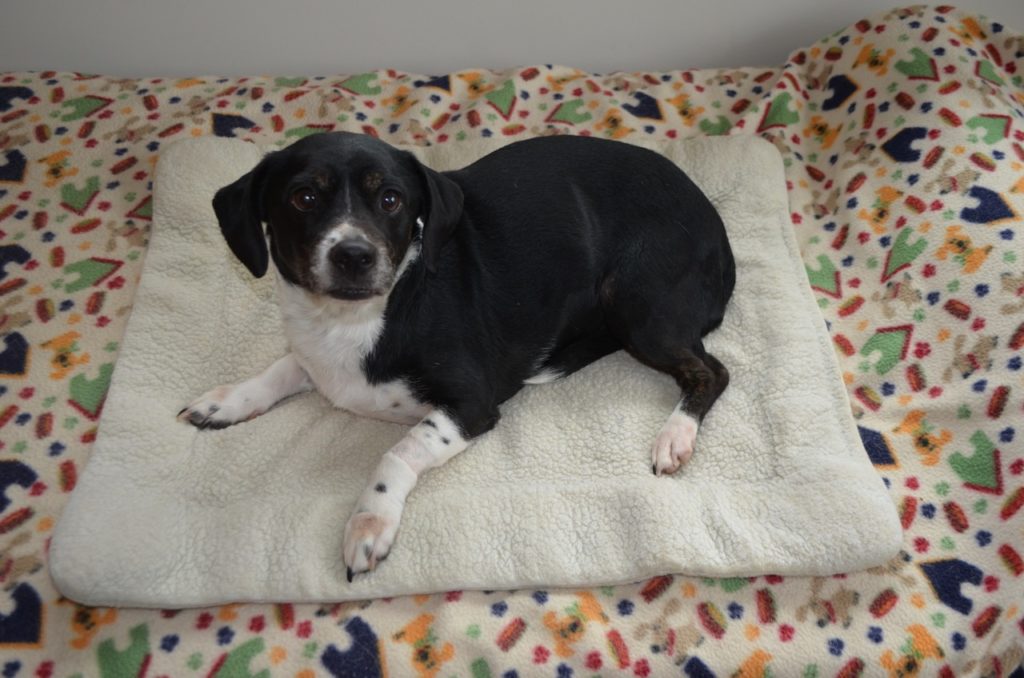 This adorable little girl arrived two weeks ago, and she nearly died the day she came. Daisy was literally in the house for 15 minutes before we were rushing her to our veterinary specialists at Peak Veterinary Referral Center in Burlington.

The day before, a local Vermont shelter had asked if we could take Daisy because she was diabetic, losing her vision, and no one had been willing to adopt her.

The same shelter had adopted her out in 2013 to an elderly man who passed away earlier this year. We learned from her vet records and from what the shelter told us that during her few years with him, Daisy had become obese and diabetic, and her owner had struggled to give her the regular twice-daily insulin shots she needed. She was generally only getting one injection a day, not two. He adored her, and took her for car rides that he called “Driving Miss Daisy,” but managing her special needs had proved difficult.

After he died, family members stepped in to try and care for her, but administering the insulin proved challenging for them too, and at one point she was getting a whopping 15 units of insulin once a day, not the 7 units twice a day, 12 hours apart, that was required. They were at least working on reducing her weight, which dropped significantly.

She ended up back at the shelter a few months ago, where she was now getting insulin twice a day, though not 12 hours apart because of the shelter’s operating hours and staff schedule. The shelter also had her in a foster home for a while.

When Alayne drove over to pick her up that Wednesday, a shelter staff member handed Daisy over and said, “She’s a little sleepy right now.”

By the time Alayne got back to the farm, Daisy wouldn’t come out of the crate in the van, and Alayne had to reach in and pull her out. I was watching this from the front porch and thought it seemed odd. Alayne carried her over to the grass so she could pee, and instead she just lay down. Alayne picked her up, set her on her feet, and she just dropped.

We carried her into the house and sat her on the floor. She lay down, then rolled over. No response. Then she started peeing. We thought, oh my goodness, she’s dying on us. We took her temperature, which was normal.

Having had 15+ years of experience with diabetic dogs, we thought we knew what we were seeing — a hypoglycemic event, where blood glucose drops dangerously low. Daisy had obviously been starting this at the shelter that morning just before Alayne showed up, and it was a full-blown crisis by the time she got to the farm.

I rushed into my office, called our internal medicine specialist in Burlington, told her what we were seeing, and asked if we should go ahead and give her Karo syrup. She told us to give Daisy the syrup, give it again to her en route, and get to the hospital as fast as I could. So as Daisy lay on her side on the floor, we used a big syringe to get the syrup onto her gums and in her mouth to get her blood sugar up.

I had just finished helping a neighbor cut up four cords of firewood that morning, and I was dripping with sweat, covered in sawdust, and reeking of chainsaw fumes when Alayne had driven up. As I quickly changed clothes (hoping no one at the hospital would, um, notice), Alayne bundled Daisy into the back seat of the truck (it had a full tank of gas) and I raced towards Burlington.

Three times during the trip I thought she had died. I’d reach back, stroke her, and get no response. I’d lift a leg up and let go, and it would just drop. There was no resistance. I pulled over each time, ruffled her face and coat, and only then would she open her eyes or lick her lips. I’d hit the road again. I stopped along the way to dose her with more Karo syrup.

By the time I got to Burlington, she was finally turning the corner, and had curled into a ball in the back seat. That was a very good sign.

Before I could even open the truck door, a Peak vet tech was at the vehicle, waiting to grab Daisy and get her onto an IV dextrose drip.

Even with the Karo syrup, her blood glucose at the hospital on arrival was still dangerously low at 36. Dr. Goossens told us the next day that the Karo syrup had saved her life. But we don’t know what triggered the hypoglycemia in the first place, which is worrisome.

Daisy spent three days at the hospital as Dr. Goossens and her team worked to get Daisy’s blood glucose under control. After changing the type of insulin and dosage, Daisy was stable enough to come home, and I went back to Burlington that Friday evening to pick her up.

We’re not out of the woods yet — both Daisy and blind Millie the Lab, two of our three diabetics (Sophie the blind Dachshund is the third), were back at Peak last week for all-day blood glucose curves, requiring adjustments in both of their insulin dosing.

Daisy also has cataracts, and will be seeing our ophthalmologist in September for evaluation. Daisy can see, but her vision is limited, and she runs into things from time to time, so we know this is something we will need to address. The first step, though, is getting her diabetes under control.

But the crisis is past, and Daisy is so far doing just great. She’s a Dachshund/Beagle or Dachshund/Boston Terrier mix (your choice!), six years old, about 25 pounds, and full of personality. She believes the secret to success in life is to lick your way there, so she greets everyone with a kiss. She’s also a Daddy’s girl and follows me everywhere. She waits by the door when I’m gone, and sleeps right outside the bedroom door all night until 6:45 a.m., when she decides it’s time for us to get up. (No, really, it’s like she can tell time.)

Daisy will run in front of us, throw herself over on her back, roll around, and wait for one of us to come rub her tummy. She knows she’s irresistible. Daisy also sits up, which is impossible to ignore because it’s so dang cute. She likes to roughhouse with me, and she will run around the living room in circles after one session, then make a mad dash for me, where we start all over again. In the morning, on her way outside, she runs alongside and jumps up to try and grab my hand as I walk with her.

Millie, the other Daddy’s girl in the house and my Main Minion, has accepted Daisy and has seemingly agreed to joint custody of me. But just to make sure I don’t forget, Millie climbs onto my lap every evening for 10 to 15 minutes as if to assert her original claim.

Daisy is a complete love bug, and we are delighted to have her join the family. We’re just incredibly lucky we happened to show up that day to get her!