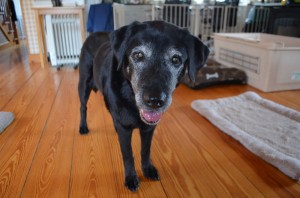 This sweet older gal?arrived on Friday from Shreveport, Louisiana. A lady?named Sherri M. had first contacted us almost a month ago when she’d seen this blind dog show up in the local shelter. Because of her disability and age, she was considered unadoptable, and Sherri and a group of other kind-hearted folks who work to save dogs at that shelter were trying to get her out before she was euthanized. She was turned in to the shelter by her owners, and when they filled out the’surrender form, under “Reason for Surrender,” they wrote: “We want to get a puppy.” No, really.

To add insult to injury, they didn’t even bother to write down the old girl’s name, so she showed up nameless. Sherri had spent some time with her and decided to name her Stella. We agreed to take Stella, but she needed to get out of the shelter right away, so we boarded her at a very nice vet clinic that Sherri recommended. Sherri picked Stella?up from the shelter and took her to the clinic for us, and even offered to?pay some of the boarding fees. The group of people who rescue?dogs from’the shelter also collectively made a $300 donation to us for her care. Stella had a lot of big hearts helping her.

Our pet transport company wasn’t able to get to Shreveport for three weeks, so Stella was at the vet clinic for quite a while in her private “luxury suite” (it was very comfy, even had a webcam so we could check in on her!). She was emaciated, had lots of worms, and was heart-worm positive as well. The clinic dewormed her, gave her a bath and a good grooming, and fed her as much as she would eat. (We decided with the vet to delay her heartworm treatment until she got here.)

Stella was very timid and unsure when she arrived on Friday; she seemed kind of lost. We walked her in and out of the house on a leash, showed her the ramps and water buckets, and let her explore the house at will. But most of the time she stayed huddled by the front door in the hall way, not really wanting to venture forth. We’d get down on the floor, wrap our arms around her, and hug her tight. We could feel her relax when we did that. But she was still nervous about everything, and understandably so.

By early Saturday afternoon, though, she had developed some confidence and was starting to get around. By Saturday evening, she had managed to find the ramp and ended up at the front door, ready to come inside. That was a big step! On Sunday morning, she was starting to go everywhere, both inside and outside. She soon figured out where food was served, and realized the kitchen should be her focus. This unnerved Darla, who was definitely miffed at Stella’s arrival in the first place and could not believe we were making over Stella’the way we were … let alone allowing her into the kitchen.

Yesterday evening I was in the kitchen working on their dinner, and was soon cornered?by two Labs: 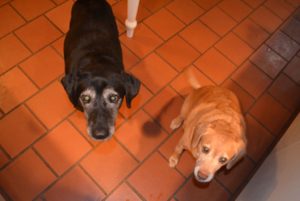 Darla began barking at me, as if to say, “Stop taking those dang photos and start serving up dinner!” The commotion brought more dogs into the kitchen, which led Darla to jump up on me: 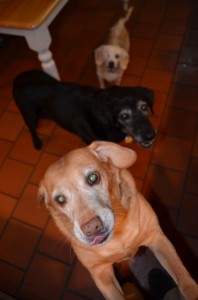 “Enough already with the camera! Serve up!”

I told Stella, “Please, please don’t model this behavior.” As you can see in those photos, Stella is very much a part of everything now. She’s happy, smiles a lot, and perks her ears up when she hears us. And she loves to be hugged — she’ll press her head into our chests, wagging her tail the whole time.

It’s hard to understand how anyone could turn in a sweet old dog like this and want to run out and get a puppy instead. Even harder to understand when you realize they weren’t feeding Stella adequately or providing basic care. Given that?Stella was?neglected her entire life, it’s sadly ironic that the best thing her owners could have done for her was to turn her in. Now she gets another chance at a new life.

Here’s another shot I took yesterday afternoon … she was?following me around the living room, and couldn’t understand why I kept one or two steps ahead of her: 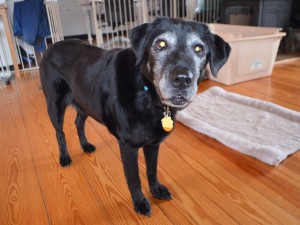 I’ll be taking her to Peak in Burlington tomorrow for a complete work-up, so we’ll have a better understanding of her health issues soon. In the meantime, please join us in welcoming this sprightly senior lady to the farm! (Darla says: “Wait … you mean she’s staying?”)?

Please note that I cannot help with technical or voting problems. I also do not have an inside track? to anyone at the Shelter Challenge, and I don’t know any more about the contest than anyone else does. So if you find yourself having issues, please consult their FAQ page here and their Rules page, which is a pop-up you can find linked on this page.