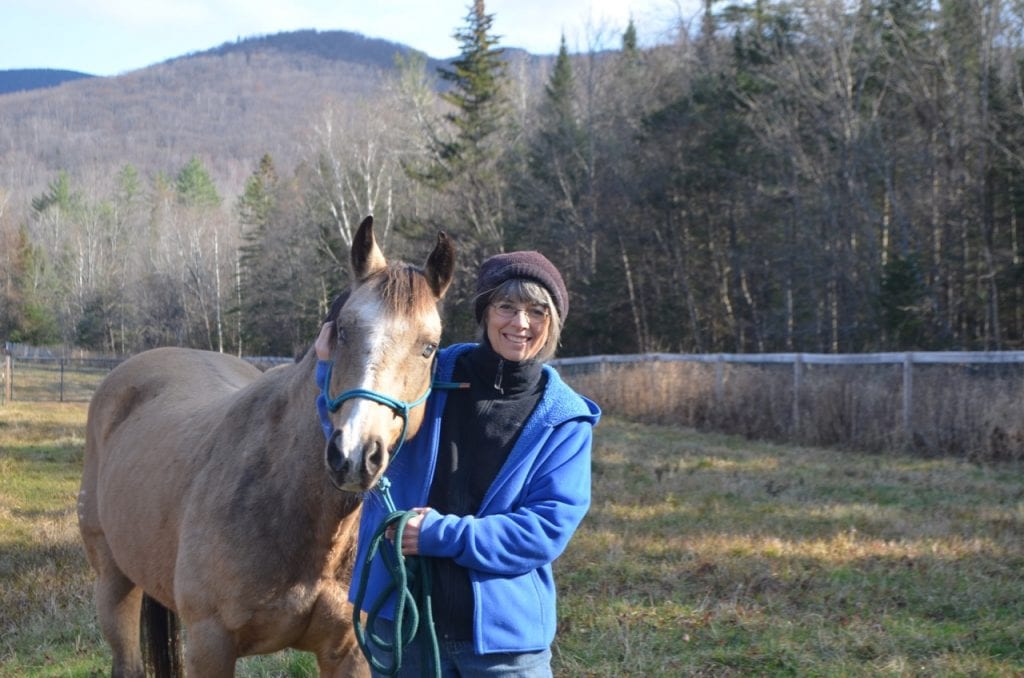 That’s Alayne with our new arrival, a blind 7-year old little mare named Shy.  She arrived Friday evening from Washington state.  Ironically, though, Shy is originally from Montana (where we first founded the nonprofit).  When her owner died, Shy was given to a so-called “horse rescue” in Broadwater County in that state.  It turned out to be a hoarding situation where animals were literally starving to death.

When the county sheriff’s department raided the facility in the fall of 2015, they found dozens of animals in bad shape, including some dead ones on the property.  Shy was one of the emaciated horses still alive, though the facility operator had already dug a hole to bury her in.  That individual was charged with 34 felony counts of animal cruelty, though the prosecutor later dropped 19 of the charges in a plea agreement that resulted in convictions on 15 felony counts and a 20-year jail sentence.

The sheriff had become fond of this sweet horse and knew a woman in Washington state named Susie T. who had a blind horse.  The sheriff asked Susie if she would be willing to take Shy, and when she said yes, the sheriff had Shy transported to her new home in North Bend.

But several weeks ago Susie contacted us through our BlindHorses.org website and asked if we would be able to provide a home for Shy, or if we knew of someone else who could.  She could no longer afford to care for Shy, and she was also losing the pasture where Shy was kept.  She wouldn’t be able to pay to board her at a horse stable.

We haven’t taken in a blind horse since 2007, but with our remaining mare Lena getting on in years — she’s 27! — we were ready to say “yes” to another one in need.  Lena lost her last blind horse companion a few years ago, and we had been thinking about getting another one as a buddy for her.  But Lena has always been picked on by other horses and would never defend herself, so we always had been very careful about who we paired her with over the years.  Thus we were kind of waiting for just the right horse to come along.  Based on everything Susie told us about Shy, she sounded like an excellent match.  We offered to give Shy a home with us.

The big Bob Hubbard Horse Transportation van arrived late Friday.  We had booked a padded box stall on the van for Shy for the trip, so she was able to lie down whenever she wanted on a thick bed of wood shavings, turn around, and be comfortable on the long journey.  There’s not enough room at the farm for that size rig (65 feet!) to get in and turn around, so we had to unload Shy at the end of our road.  I walked her down the 1/4 mile to the house and barn while Alayne followed behind in the vehicle.  There are two places where the road crosses over our stream, and each time as we got close to those spots Shy would stop — the sound of the rushing water made her nervous.  I would let her listen to the stream for a minute or so, then encourage her to step forward.  As trusting as blind horses are, she would then put her faith in me and off we would go again.

We had set up a stall in the barn for Shy that was right next to Lena.  Now, you never know how two horses are going to react to each other for the first time — it’s all based on personal chemistry, and sometimes it works and sometimes it doesn’t.  Lena’s initial reaction was, “Wait!  Who is THAT in my barn?!?”  She did a lot of snorting, hoof stamping, whinnying, and circling in her stall.  We’ve seen this countless times in years past:  The usual horsey “getting-to-know-you” theatrics.

This continued into Saturday morning.  Meanwhile, Shy ignored all this commotion and happily kept munching away on hay in her feeder.  She’d occasionally lift her head up and look in Lena’s direction, as if she were wondering, “What’s up with the girl next door???”

That morning we took them for a long walk together and Lena did fine.  Still a bit edgy, but we could tell she was already starting to accept Shy.  For her part, Shy remained quiet, calm and easy-going — all of which are Lena’s usual attributes, by the way!  By Saturday afternoon Lena had settled down a lot, and we noticed the two mares were starting to spend a lot of time side by side in their stalls.

On Sunday morning we took them for another long walk together and on out to pasture.  That’s where I took the photo of Shy with Alayne at the top of this post.  We let them graze together while we held their lead ropes.

Here’s another photo I took on the walk: 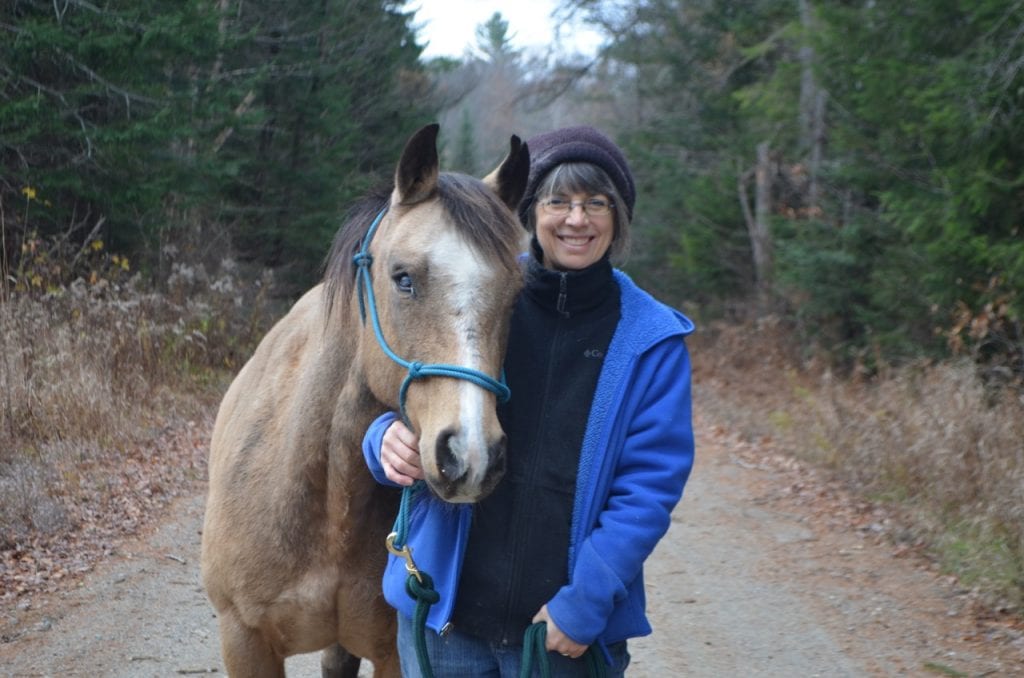 At the edge of the pastures is the small barn where we first kept Lena (we since moved her to the big barn across from the house).  There was a patch of still-green clover next to it, so we let the two girls start munching away … and pretty soon they were literally nose-to-nose: 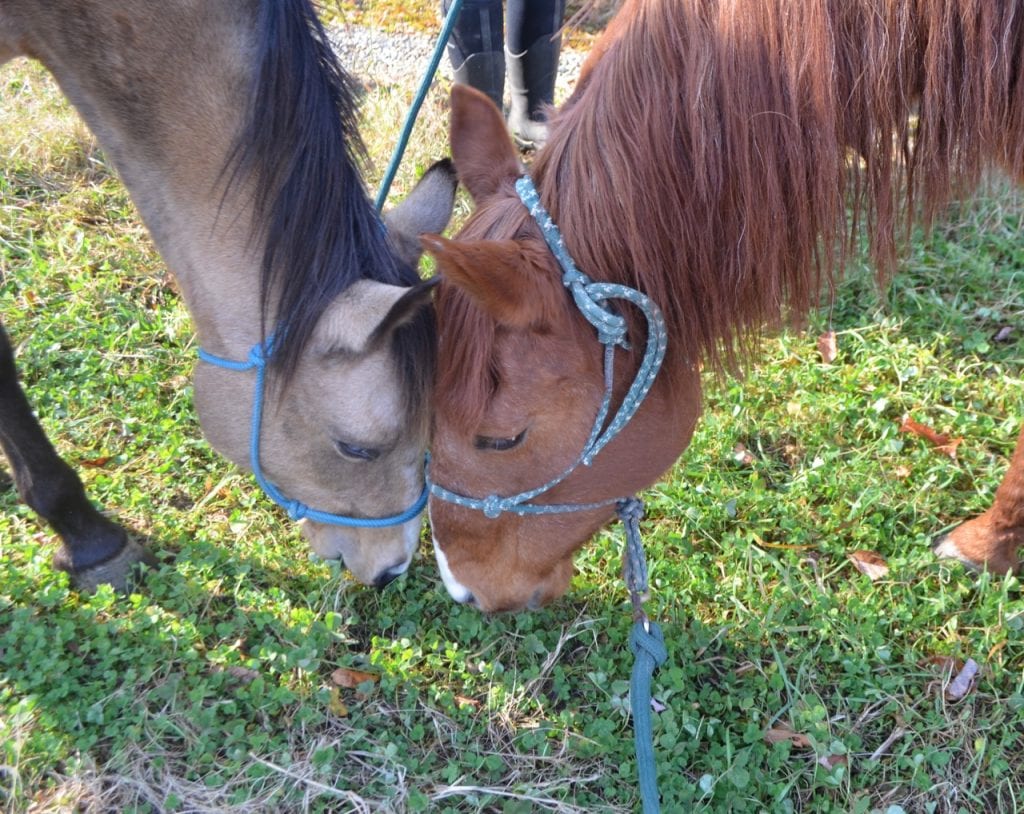 On the walk back to the barn, Lena was completely focused on where Shy was.  I took Lena into the barn first, and when she realized Shy hadn’t come in right behind her, she started nickering for her.  A few seconds later Alayne arrived with Shy, and Lena sighed.  As I took Lena’s halter off, I told Alayne:  “Well, that’s it, she’s bonded!”

So, thanks to a Montana sheriff who wanted to give this blind mare another chance and to Susie T. for giving her a wonderful home for the past few years, Shy is starting the next chapter of her life here in New Hampshire.