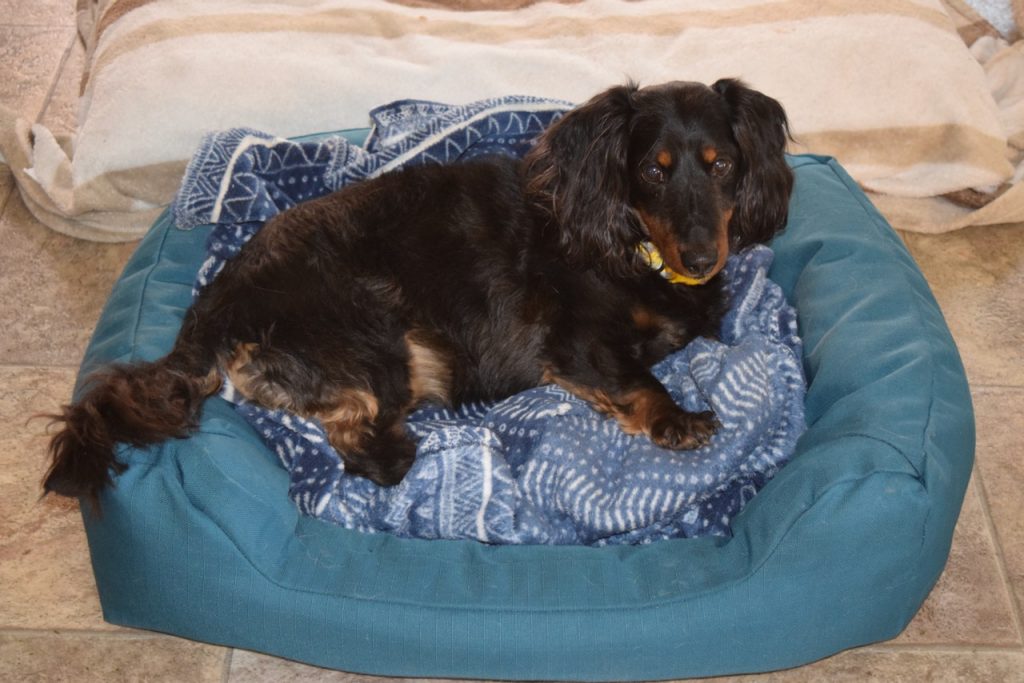 This handsome Dachshund arrived last Thursday from Mobile, Alabama. He’s just as sweet as any dog we’ve ever known. Oscar came from a family that felt they could no longer provide the care he needed. They had seen us on a recent episode of Jack Hanna’s TV program (that episode was taped in 2009 and is still airing on the program a few times a year!) and reached out to see if we’d be willing to take Oscar in.

Of course, Alayne was diagnosed back in 2002 with the condition known as Doxieholic syndrome, so we immediately said “yes!” Our pet transportation company, Royal Paws, had a cancellation in their schedule and were able to pick up Oscar the very next week and bring him out to us.

Oscar’s family had bought him as a puppy from a breeder about eight years ago, and so they had been the only home he had ever known. This is always a difficult and emotional situation for all concerned, and our hearts always break for a dog whose life has been so suddenly turned upside down. We were also a bit worried about how Oscar would do once he arrived, because he had been the only dog in the family.

As it turned out, the other dogs here actually were a comfort to him. I think they helped distract him from the disruption he had just gone through. During his first evening here, as we made the introductions one-on-one, he eagerly greeted each dog in turn with a happy tail wag and a little bounce in his step. He reminded us of the extroverted person who shows up at a party and quickly makes the rounds, shaking hands and introducing himself to everyone there. Oscar, we quickly realized, was a very sociable little guy!

By the next day, he was already just a member of the pack. He would be hanging out with the other dogs in the living room, snoozing with Honey and Wally, our other blind Dachshund, on a bed. He’d be standing in the middle of the scrum at the laundry room gate to greet us when we came back from barn chores. Everyone immediately accepted Oscar and he accepted them. In general, it seemed like he’d been here for a long time already!

The only dog who wasn’t quite sure what to make of Oscar initially was our other recent arrival, blind Dolly, who apparently didn’t realize that any other dogs would be coming after her. She was like, “Wait, who’s this???” But even she soon accepted Oscar as another member of the family.

Oscar is blind from progressive retinal atrophy, or PRA, which means the retinas gradually degenerate over time and no longer function. So unfortunately there isn’t anything our veterinary ophthalmologist can do to restore his vision.

But clearly being blind doesn’t stop Oscar from being a happy, friendly guy who enjoys life to the fullest. And there is no greater enjoyment for him than meal time, when he jumps up and down in excitement at the food dish that’s coming his way. He can jump way higher than you’d think a low-slung Dachshund can go!