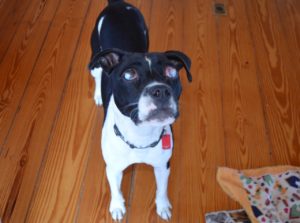 This young lady, named Millie, arrived a few days ago from Arkansas. That’s her classic look — she follows me around the house, staring?up at me like that.

You can tell those eyes are in desperate need of medical attention. She?is an 18-month old Boxer mix who was adopted out by a local shelter as an 8-week old puppy in front of a feed-store, and she clearly already had eye problems then (we’ve seen photos of her as a puppy). The adopter turned out to be a very elderly lady who kept Millie as an outside-only dog and did nothing about her eyes. The lady just went into a nursing home in the last several weeks, Millie was returned to the shelter, and a rescue group we’ve worked with in the past (who sent us Tanner, among others) asked if we could take her.

We have an appointment for Millie with our veterinary ophthalmologist this week in Burlington.

Millie?is a very sweet girl and gets along great with everyone. She enjoys?playing with Tanner (photos of them together next week on the blog!), and though she can’t see, Millie has a great time chasing Tanner around the yard. She’s amazing in her ability to keep track of him, even though she can’t see. (She’s knocked over our wireless weather station in the yard a couple of times!)

Darla has taken to chasing Millie away from the ramp to the front porch, which Millie just loves as a “catch-me-if-you-can” game, jumping and twirling as she spins away from Darla. A minute later she’s back, trying to taunt Darla into going after?her again. Millie leaps into the air, boxes with her front legs, and does lots of play-bows to coax them into playing. Both Tanner and Darla are getting plenty of exercise now that this high-energy girl has arrived. 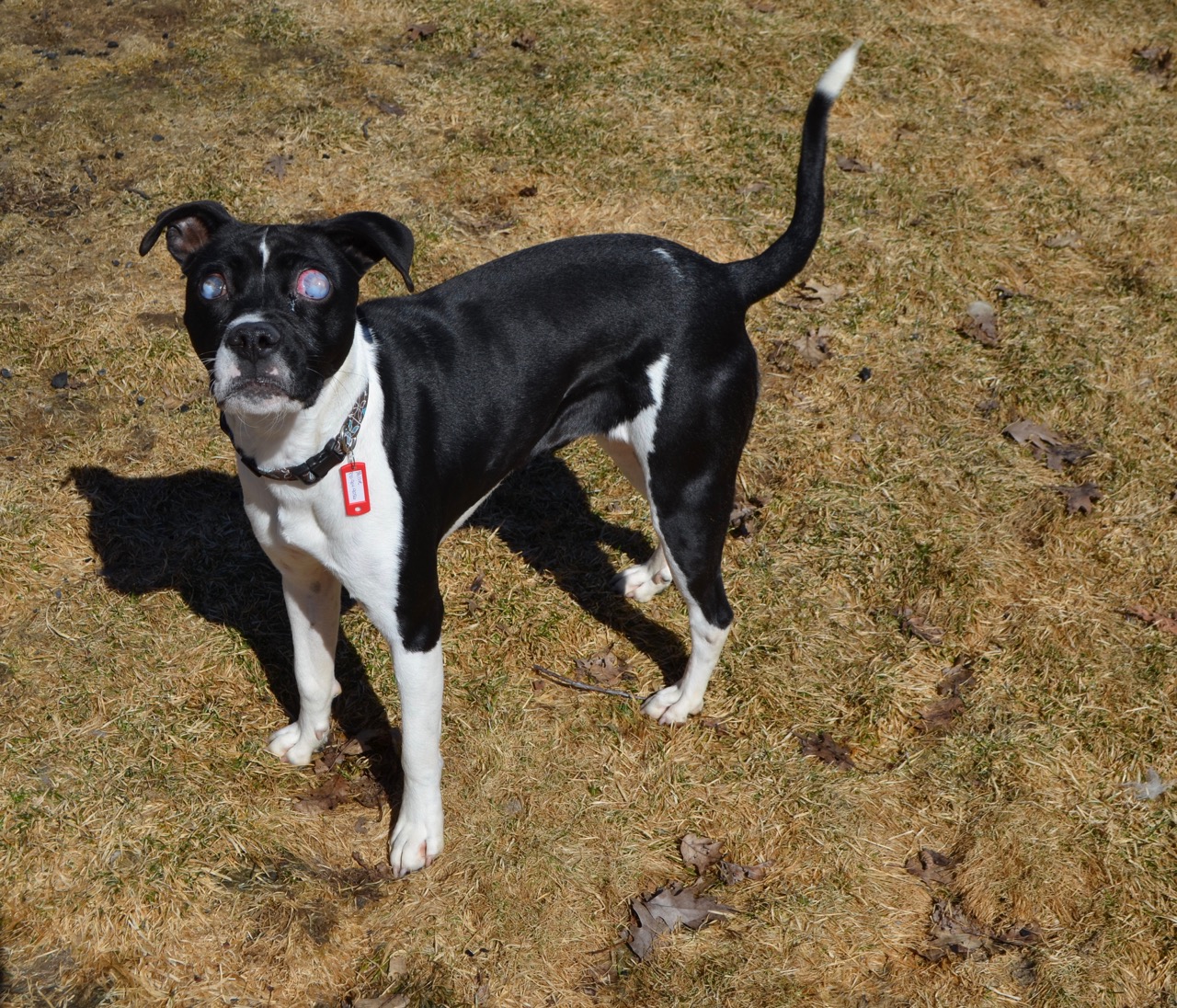 As for breeding, we’re not sure what else she’s part of (Holstein?), though she has the classic undershot Boxer jaw. I didn’t know until I started looking online this weekend, but there are people who breed black Boxers and there are quite a few black-and-white ones out there. (See this for example.) But Millie doesn’t have that heavy jowly look, either. We thought maybe she had some pittie in her, though’that doesn’t quite seem to fit, either?- but who knows??

Here’s a close-up of those eyes: 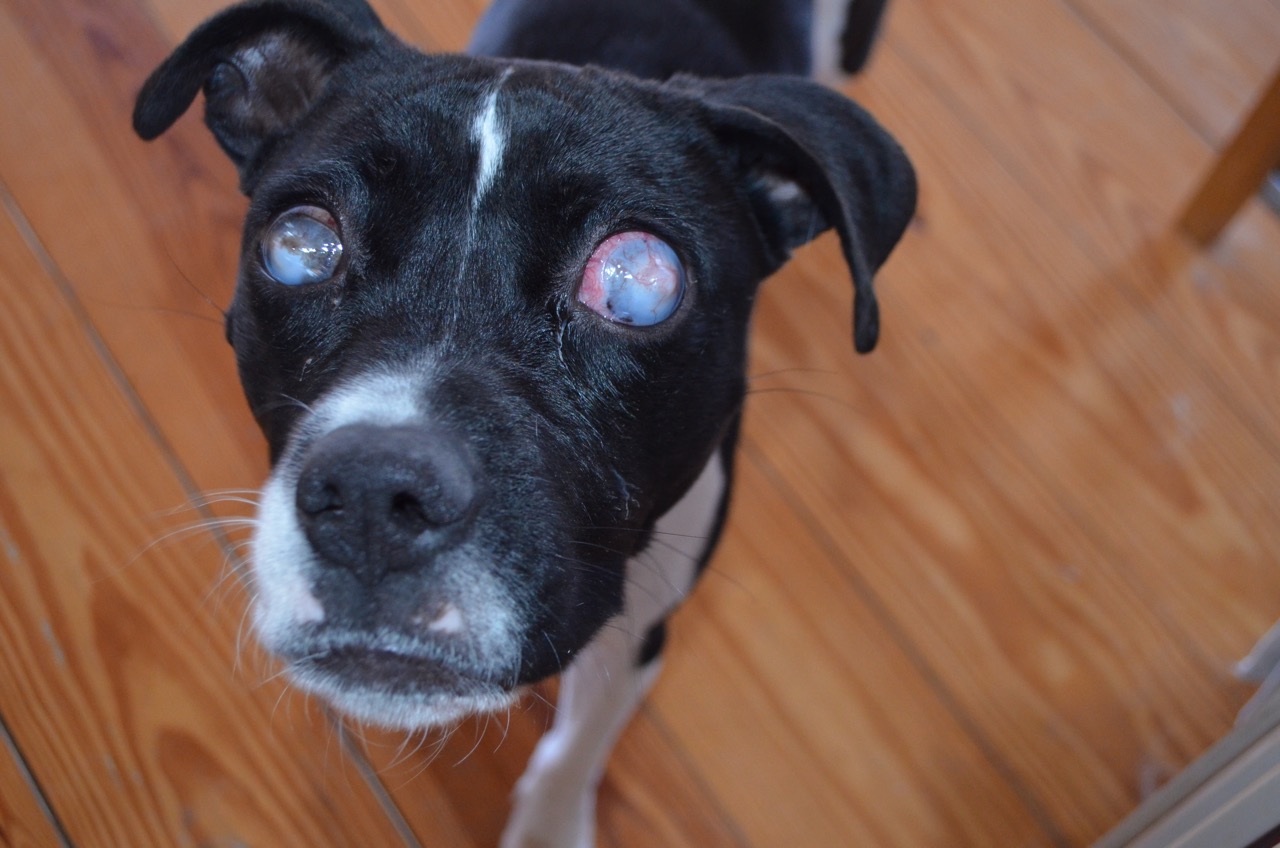 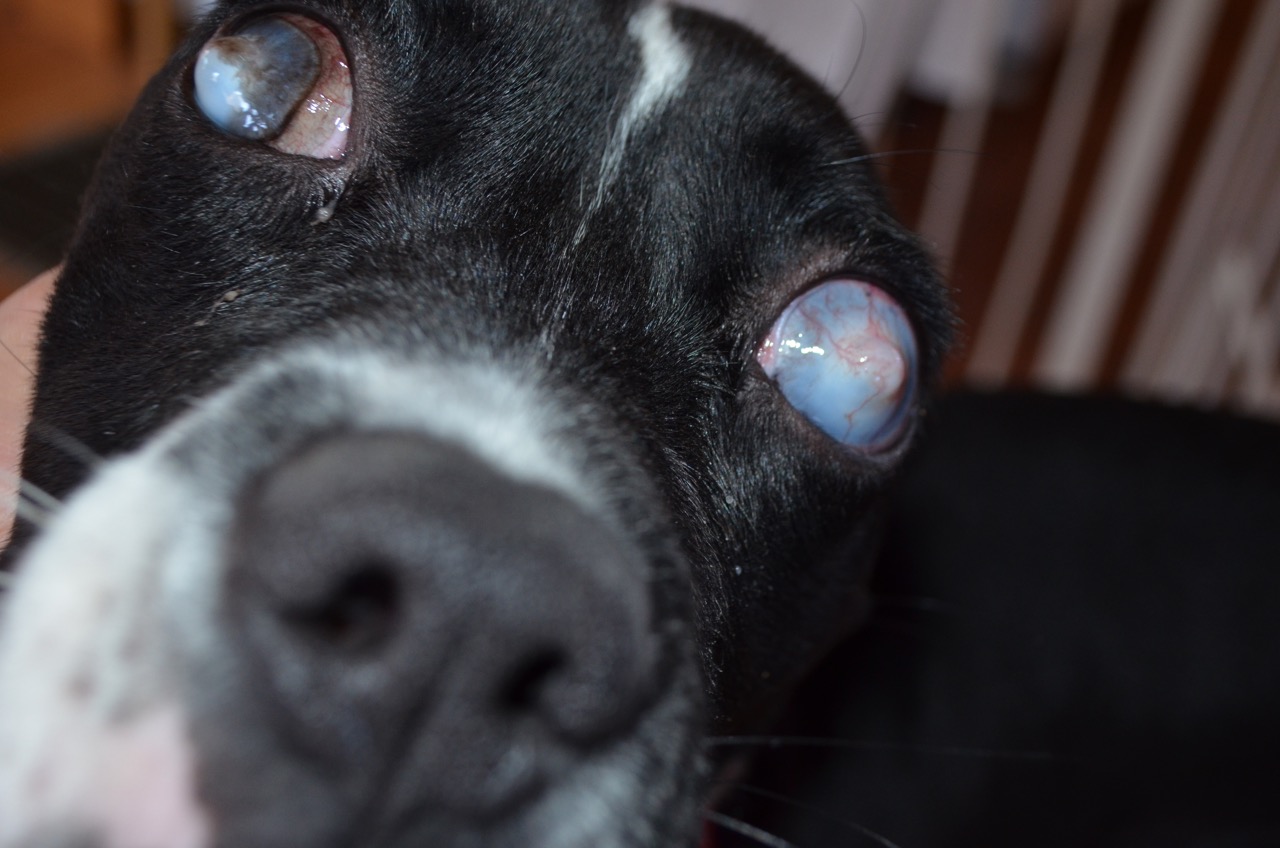 You can see those ulcers are just popping out — I’ve never quite seen any that bad before.

But for now, she seems happy, loves her new friends, and for a dog who spent her entire young life outside, she’s been remarkably good at house-training.

I’ll have an update next week on her.