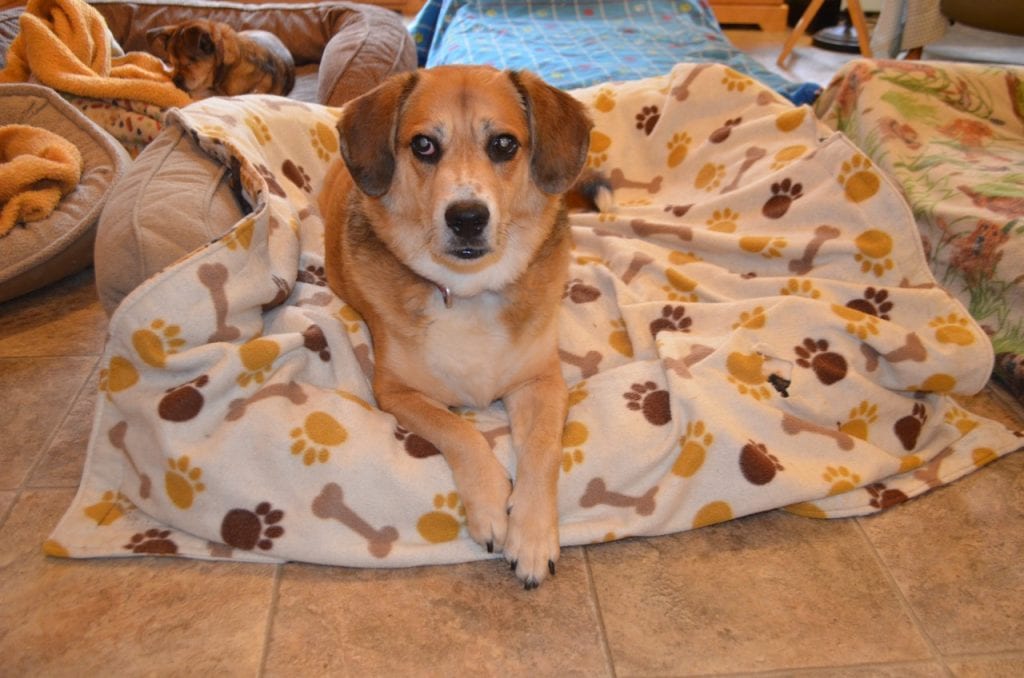 This lovely girl came to us about a month ago over the Memorial Day holiday from the Pittsburgh area. Katie had belonged to a family that had been trying to find another home for her for quite a while. Over the past few years she had lived with various family members, but then in May she had been turned over to a local rescue group. She went to one foster home that returned her after a one-night stay — she apparently chased the cat. A few days later she went to another foster home that also promptly gave up on her because Katie’s barking upset their disabled child.

We had earlier offered to take Katie after one of our supporters told us about her, but the family initially declined because they preferred letting the local rescue try to place her instead. It was only after the second foster home sent Katie back that the family asked us if we would take her. We agreed, and within a couple of weeks our private pet transportation company picked her up and brought her out to the farm in New Hampshire.

Katie turned out to be a wonderful, loving dog who just wants to please. She gets along with everyone. Yes, she can be a bit “reactive” which leads to some barkiness, but she has realized since coming here that this is a calm, quiet environment. She’s already learned to model the chilled-out behavior of the other dogs, so she fits right in now.

I took that photo this afternoon in the living room. That’s blind Bugsy on the left behind her.

Katie is blind from juvenile cataracts that were never treated. She’s now eight years old. Soon after she arrived I shined a flashlight in her eyes one night and got an immediate “dazzle reflex” or pupillary light response, meaning her pupils restricted because her retinas could detect the light. That gave us hope that despite having had cataracts all these years, we might have a chance to restore her vision with cataract surgery.

Last week I took her to Peak Veterinary Referral Center in Burlington for an appointment with our veterinary ophthalmologist, Dr. Sarah Hoy. We had scheduled an eye exam and an electroretinogram (ERG) to test how well her retinas are working. Dr. Hoy said her ERG numbers were “through the roof,” meaning her retinas were working perfectly. When she ultrasounded Katie’s eyes, she did detect two abnormal areas at the edge of the retinas in each eye. This may be the result of the vitreous body clumping together because of the chronic cataracts and cataract-induced inflammation (i.e., uveitis, which Katie does have and which we are now treating her for).  Dr. Hoy will get a better look at the retinal periphery after taking out Katie’s lenses during the surgery, and can address it with a laser procedure if necessary before waking Katie up from the anesthesia.

So if all goes well with her surgery on July 21st, Katie will be able to see again in just a couple of weeks!

It’s hard to tell from that photo above, but she is very overweight, so Katie is on the Rolling Dog Farm diet and fitness plan with a very specific weight target to reach. We had also scheduled a consultation with our veterinary surgeon at Peak, Dr. Kurt Schulz, to review her hips because of prior references to hip dysplasia in Katie’s earlier medical records. Fortunately he determined that she just has normal age-related arthritis and nothing that would require surgical intervention. She’s on a new type of anti-inflammatory to help with any discomfort, though we haven’t seen any signs of her having trouble getting up or down. It was Dr. Schulz who calculated her ideal target weight, so whenever Katie complains about her diet, I tell her we’re just following the doctor’s orders. (In truth, we had started her on a diet as soon as she arrived!)

Katie is a very affectionate girl who loves to give kisses. She’s also something of a Daddy’s girl, and follows me everywhere. In the mornings she comes to the bedroom door and lays there until I come out. She’s just a delight to have in the family, and we feel fortunate she’s now with us in her forever home.

I wish we could just leave this blog post on that happy note, but I sadly have to report that we lost Mia a few months ago. You may recall that we had already done one front leg surgery to repair a fractured elbow, and another surgery to replace one of her hips. We had taken her back to Peak for her second total hip replacement in March when the surgeon discovered an odd skin infection on that hip while clipping her for the operation. It hadn’t been visible before under her hair coat, and she wasn’t scratching or chewing on her leg, so we had no idea it was there. We had to postpone the surgery while we treated what our veterinary dermatologist found was a rare antibiotic-resistant infection.

Ever since Mia arrived we had struggled with behavior issues, which only became worse over time. While we had been prepared to deal with all of her medical problems, we did not expect a host of behavior issues, too. It was almost as if the same puppy-mill genetics that produced severe hip dysplasia in her as a puppy also wreaked havoc with her mind. In the months while we were treating the skin infection, those behavior issues became overwhelming, and we finally made the painful decision to let her go. It was one of the most difficult things we’ve ever had to do. So that’s the sad ending to what we had hoped would be a very different story.