You are here: Home / Dogs / Please Say Hello to Bobby! 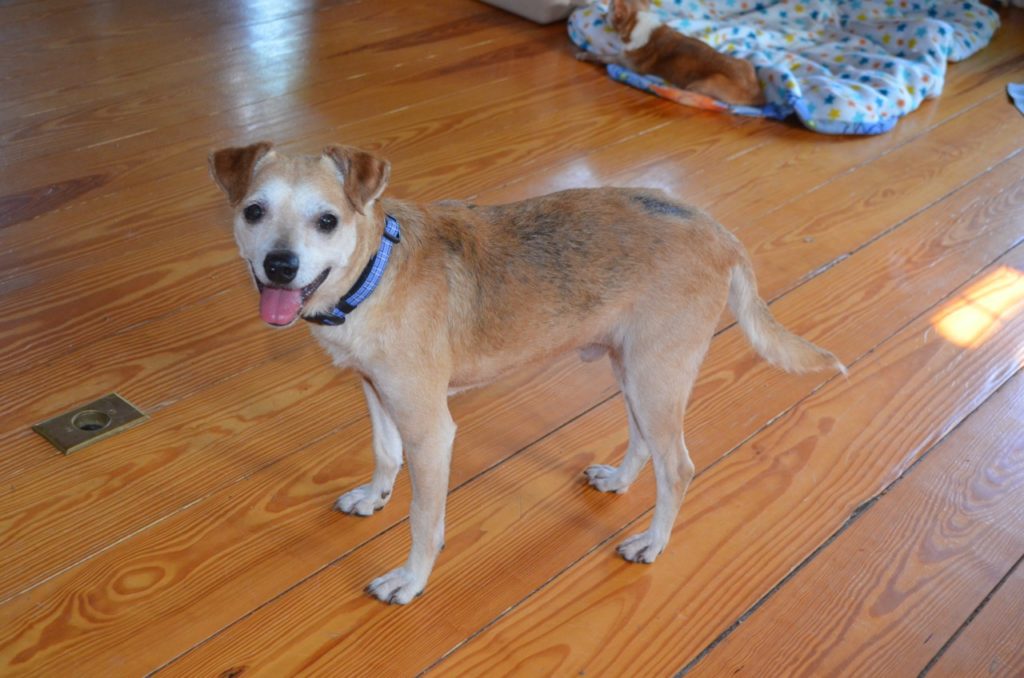 This little guy arrived from California over the Memorial Day holiday weekend. His name is Bobby, and I took that photo in our living room the day he arrived. He came to us from a private rescue group/shelter near Fresno where he had lived since 2007 — or maybe 2010, no one really seems to know for sure — living in an outdoor covered pen on dirt. He was blind, small, and being picked on by his kennel mates. A volunteer, seeing his condition, arranged for?him to get?into a separate pen of his own, and then asked us if we could take him. She wrote, “It is heartbreaking to watch … he has a hard time navigating around to find his food, he is very frightened and scared, and he looks terrible.” His eyes were crusted over every morning with green gunk.

He had arrived, all those years ago, with long untreated mange, and you can still see a left-over bald patch on his back just above his hips. During that ordeal, he had worn most of his teeth down to the gums, chewing on himself.

We agreed to take him.

He had not seen a vet during his’time at the rescue, so the first thing we did was look for a high-quality veterinary clinic to board him and take care of his medical needs until our transport could get there. We were in luck. We found Pet Medical Center and Spa in Fresno, and I called to make the arrangements. A day later, the volunteer picked up Bobby from the shelter and took him to the hospital. He spent nearly two weeks there, getting a complete work-up — blood panels, X-rays, ultrasound, eyes, grooming, vaccinations, neutering (oh yes) and a dental.

He had severe periodontal disease, and in the end, the vet removed all but four teeth. Two of those remaining teeth are broken and still must?come out, but because of the difficulty involved, we need a board-certified veterinary dentist to do it. Interestingly, before doing a dental on a dog, this clinic takes dental X-rays, then sends them electronically to a board-certified veterinary dentist to review, who then emails back specific instructions for how to proceed with the oral surgery. I’ve never seen that before, and?I was very impressed with the level of detail and care for something that is often considered “routine.” I have the veterinary dentist’s report of his findings on Bobby’s mouth, which we will share with our own veterinary dentists in Massachusetts when they do the follow-up work. (He will also be seeing our veterinary ophthalmologist as well.)

The team at Pet Medical Center was fabulous. They took wonderful care of Bobby, called with frequent updates, and treated him like a family member. And the volunteer, who Bobby had become attached to, would go and visit with him at the hospital multiple times during his stay. She would just sit there, holding him in her lap, and loving him up. She was really Bobby’s angel. I’m sure Bobby couldn’t believe his good fortune that this wonderful lady turned up in his life.

Every day while Bobby?was at the clinic, with test after test being run, we braced ourselves for the latest diagnostic reports, expecting the worst, but each test came back generally with good results. For a guy who’s at least 10 years old, he’s in remarkably decent?health. He can also see shapes and shadows, and does really well navigating around. So it will be interesting to see what our veterinary ophthalmologist has to say about his eyes.

Then, at long last, Bobby was off to New Hampshire!

Three-legged Tanner, as I’ve reported before, is the self-appointed ‘camp social director’ and official greeter, so here he is welcoming Bobby on his first day: 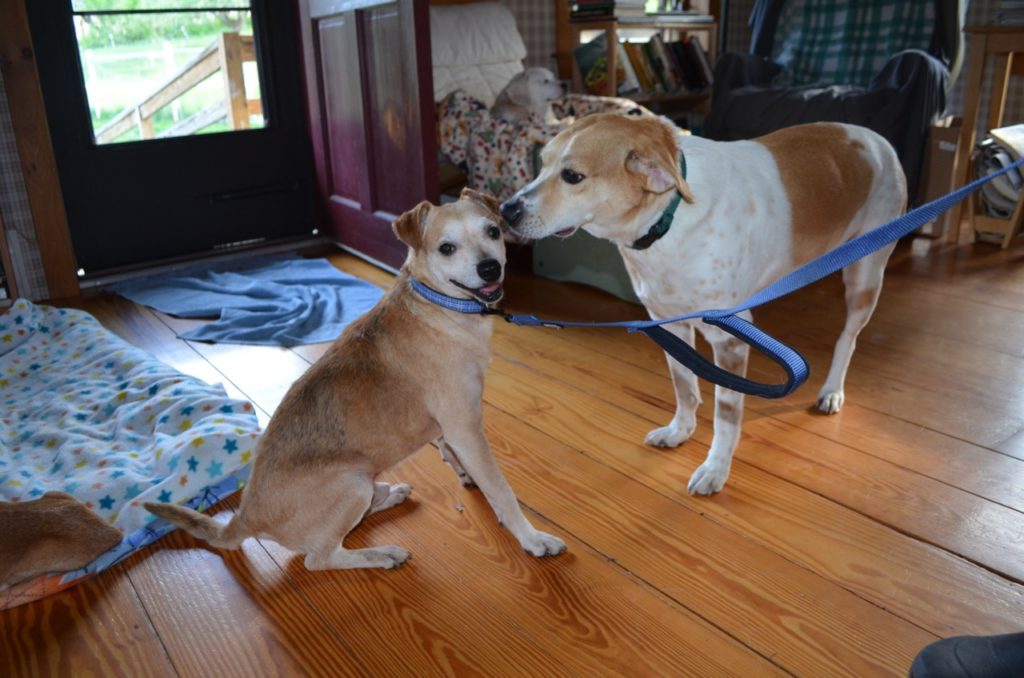 We had put most of the dogs up when the driver arrived with?Bobby, so it wouldn’t be overwhelming for him. As the day went on, we let the dogs out gradually, one by one, to do the meet-and-greet. Some dogs, like Aurora in the chair in the background, and little Wilbur there on the left, never show any interest in welcoming newcomers, so they just kind of stay put.

It was clear over that weekend that Bobby was relishing his new-found freedom to explore and run around, to walk in green grass and to lay in the sun, to come and go from the house as he pleased. Here he is soaking in the sun on the ramp: 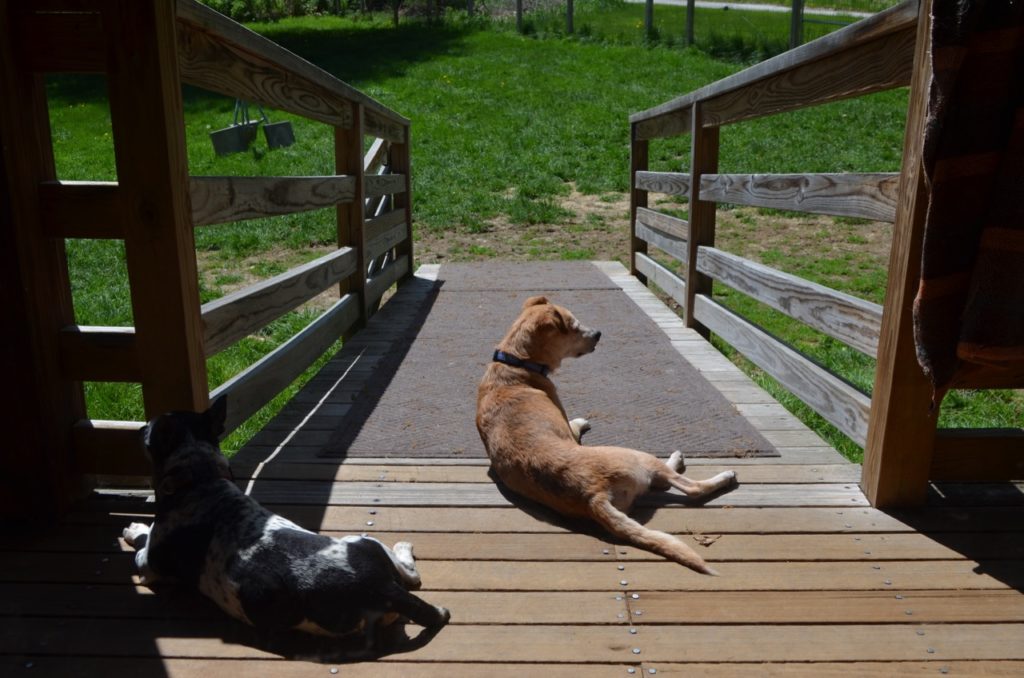 Since arriving, Bobby has attached himself to Tanner, and follows him everywhere. They love to wrestle and roughhouse together, and I will share some of those photos next week.