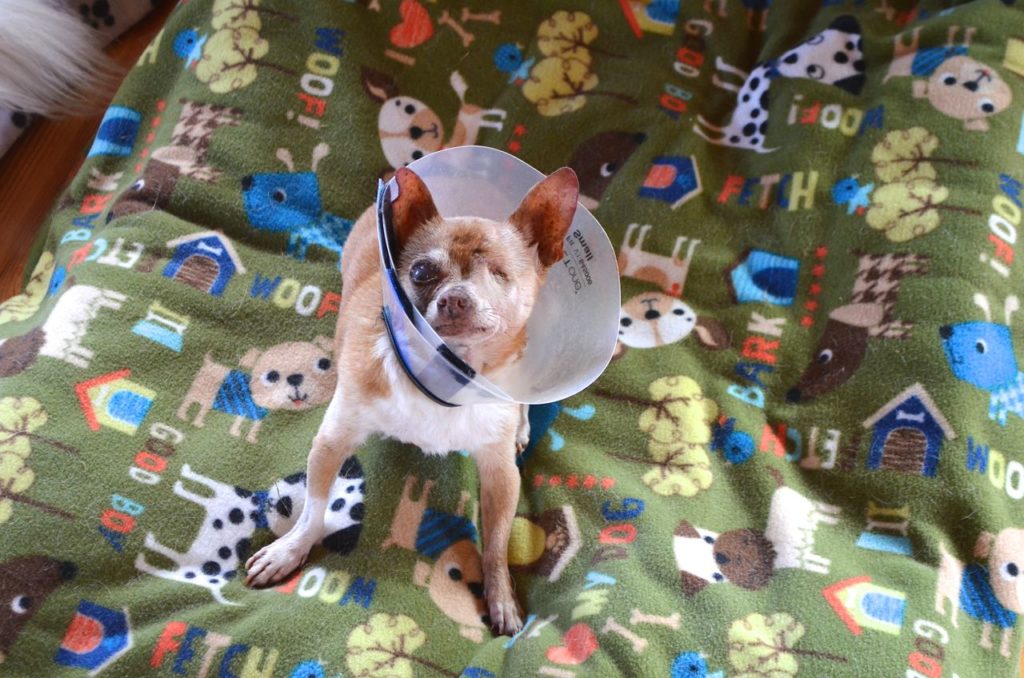 Here’s somebody who isn’t a happy camper. A couple of weeks ago Wilbur began squinting in that one eye of his, and it looked like he had a small corneal ulcer. We began treating it as we normally do, and as long as we kept the medications going in the eye, it seemed comfortable. But as soon as we stopped, the discomfort would reappear. Clearly, it wasn’t healing like it should. So last week I took him to Peak Veterinary Referral Center to see our ophthalmologist, Dr. Sarah Hoy. She was kind enough to squeeze us in between surgeries, so her?vet techs were busy tending to those patients and that meant I was holding Wilbur for her … and thus no photos!

She quickly diagnosed the problem: Wilbur had an “indolent ulcer,” which is simply … an ulcer that doesn’t heal.

Here’s a great write-up on indolent ulcers with diagrams from a British veterinary ophthalmology clinic that explains what is involved in treating this condition.

While I held Wilbur, Sarah went to work on his eye after numbing it with a topical anesthetic. In just a few minutes she had removed the epithelium layer of cells, created the “grid”?for new healthy epithelium cells to grab onto, and then covered Wilbur’s eye with a contact lens to protect it during the healing process. We went home with different eye meds for this particular problem — one that is given four times a day, the other three times a day.

For Wilbur, however, this “particular problem” is actually the cone he is required to wear at all times. Once back home that evening, he whined and whined so loudly we knew we’d never get any sleep if we left him in the living room for the night. So we set up a new “boat” for him (an open crate filled with bedding) in Widget’s Room (yes, still and forever known as her room) on the second floor?in the dog wing.

Now, a few days into this, he is much less whiney and more accepting about the cone, which comes off only at meal times and for water. The eye seems to be making progress, though it’s hard to know for sure because of the contact lens. We take him back to see Sarah in two weeks. What we haven’t told Wilbur yet is that the cone may have to stay on for up to eight weeks. Uh oh.

There is a new Shelter Challenge contest that started last week and ends on August 30th. Since we came in first place in New Hampshire for the last round — thank you again! — we are not eligible to win first place in the same contest this time, though we are eligible for one of the weekly prizes if we get sufficient votes in a given week.