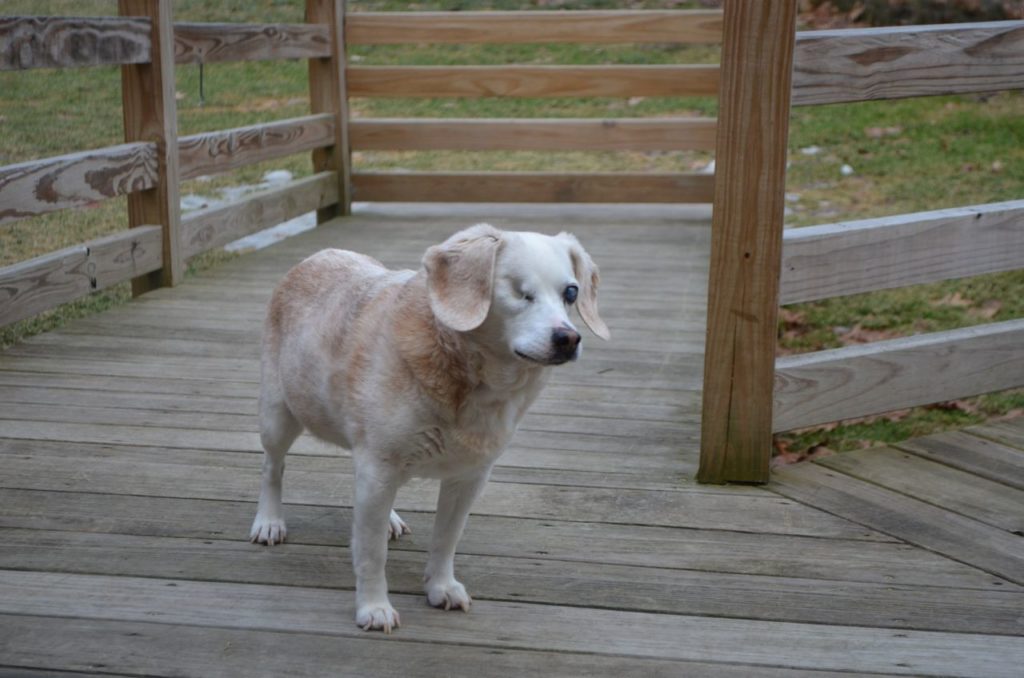 Our little girl Aurora is back in the hospital. On Sunday morning when I let her out of her crate, she was down in her hindquarters and screamed when she tried to move. She scooted forward, dragging both back legs behind her. I knew instantly what had happened: another blood clot. I was just incredulous, because last weekend she had been bleeding to death internally, unable to clot, and exactly one week later she was suddenly clotting too much. How could that be possible? She’d also had diarrhea in her crate, so I carried her downstairs and outside so she could pee?on the grass. She tried to walk again, and both back legs flipped backwards as she moved forward. When we picked her up to see if she could stand, we noticed she had some resistance in her right leg and could pull it away if we tugged on it, but her left leg was completely limp. Her legs?were not yet cool to the touch, so the clot must have developed in the past hour or two.

As Aurora struggled to stand, she cried out again and again. Alayne and I stood there and watched, our hearts just breaking for her. While Alayne scooped her up and carried her back inside to give her water and put her on a bed in the living room, I called our internal medicine specialist at Peak in Burlington, Dr. Marielle Goossens, to tell her what was happening. Bless Marielle’s?heart, early on a Sunday morning, she’s on the phone with me and taking care of us yet again. She told me what to start Aurora on — the main thing right then was buprenorphine for pain, which we had on hand just in case Aurora had another clotting episode — and to bring her over to Peak so she could start treating Aurora that afternoon. We bathed Aurora, and soon Alayne was on her way to Burlington. I went back to haying (yes, we were in the middle of haying again when this happened!).

On Monday morning the radiologist at Peak, Dr. Lynn Walker, found out on ultrasound what had occurred: Aurora hadn’t thrown a new clot, but the original?clot from months ago had grown larger and moved a little farther down her abdominal?aorta, now shutting off blood flow to her left rear leg and reducing the existing flow somewhat to her right leg. In the immediate aftermath of her first clotting episode, Aurora’s body had quickly compensated by re-routing blood flow around the clot to the right leg very quickly. We were all astonished at how fast she recovered the use of the leg. This time, her left leg is taking a lot longer to get the blood flow back.

But the question remained: How could she go from uncontrollable bleeding to clotting in a week?

Well, as Marielle explained to me yesterday, we are now balanced on a knife’s edge with Aurora’s clotting factors. In reducing Aurora’s?heparin dose slightly last week to stop the internal bleeding, it apparently was just enough to trigger renewed clotting around the existing blockage. We thought that clot might have been eliminated by now through normal body processes, but that wasn’t the case. To give you some idea of the fine-tuning here, over the space of a few months we had gradually worked up to a dose of 3.3 cc of heparin, with weekly blood tests to determine her clotting activity and adjusting the dose accordingly. When she began bleeding out last weekend, Marielle told the emergency clinic to reduce the heparin dose to 2.5 cc, then increase it to 2.8 cc. That was the dose we had continued her on through the week. This past Sunday morning, Marielle had us increase it to 3.0 cc before transporting her, and she’s now at 3.1 cc. Part of the problem, Marielle told us, is that the body doesn’t always absorb and utilize heparin at a steady rate, which can wreak havoc when you are so finely balanced between bleeding and clotting.

As I was writing this post, Marielle called with an update: Aurora’s left leg has regained warmth (it had grown cold by Sunday afternoon), though she doesn’t have use of it yet. She is able to hop around a bit on three legs, and is no longer crying out in pain. She continues to have some gastrointestinal issues, which Marielle believes may be due to restricted blood flow to part of her intestines because of the clot. They are beginning physical therapy on her left leg, which is something we will have to continue when she comes home to keep it from atrophying. Right now the plan is for us to bring her back on Thursday if she continues to progress. What then? Her prognosis is guarded at best. It will, quite literally, be a day by day thing. Please keep her in your thoughts.