You are here: Home / Dogs / Now Look Who Had Knee Surgery 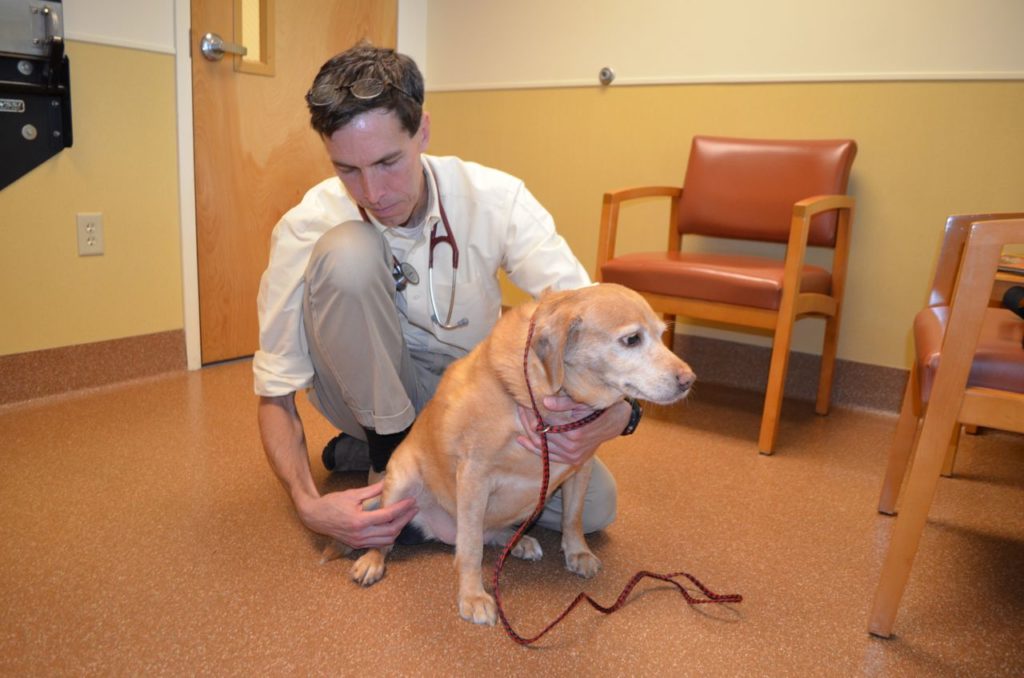 Yes, that’s Darla having her right knee examined by our veterinary surgeon, Dr. Kurt Schulz, last?Thursday?morning at Peak Veterinary Referral Center in Burlington. The prior?weekend I had gone into the front yard for the afternoon poop scooping. Darla, who was on the front porch, saw me come through the side gate and ran full speed down the ramp to come to me, leaping onto the grass.

Instinctively, in the split second as I watched her race down the ramp, I knew it wasn’t going to end well. I don’t know what triggered that thought, but it happened so fast I couldn’t even get any words out quickly enough to slow her down. As she landed on the grass, she stopped, looked stricken, and cried out. She looked over at me, then at her right rear leg, and started howling. Then she pulled her leg up in the air and held it there.

I knew in that very moment she had just blown out her cruciate ligament. I couldn’t believe it. Here we were still in the middle of Aaron’s recovery from his knee surgery, and now we’d be taking Darla in for the same thing.

A few minutes after it happened I texted our internal medicine specialist at Peak, Dr. Marielle Goossens, to tell her what Darla had?just done, and she worked on getting us onto Kurt’s schedule so we could do the evaluation and surgery on the same day. In the meantime, we put her on pain meds and other supportive care.

Sure enough, Kurt confirmed it was the cruciate ligament, and late Thursday afternoon he did the TPLO surgery on her. This was the same knee he had operated on in March of this year to remove a mast cell tumor. Egads. (If only we had known!) On Friday I drove back to Burlington to pick up my girl and bring her home.

Alayne set up a hospital pen for her in the living room … here’s a photo I took this morning: 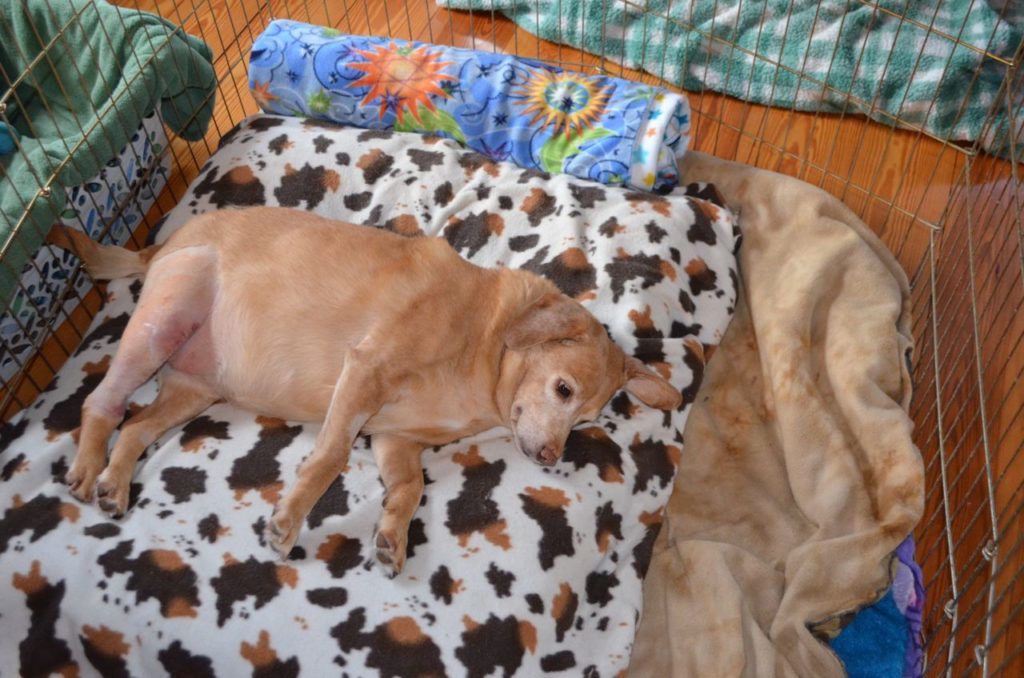 She’s doing fine, and unlike Aaron, has maintained her interest in all things food. (I had no doubt about that. In her defense, she is on a restricted diet, and we’ve had her thyroid checked.) She’s on a full course of post-op pain meds and antibiotics.

Of course, because this is?a “special” bed, it’s now the place to be for everyone else. Here’s a shot we took over the weekend when Aurora managed to sneak onto the bed when we briefly left the gate open, leaving Darla looking a wee bit unhappy:

This is the fourth surgery Darla has had since coming to us?last year?– cataract surgery, two mast cell tumor surgeries, and now the TPLO. Fortunately, we have never had to put a cone on her to keep her from chewing or licking at her suture sites, or in the case of the cataract surgery, from rubbing her eyes. (Aaron turned out to be the same way.) That is a real plus, and makes everything else easier. Now we just have another eight long weeks of slow recovery ahead. But for Darla, the most important question continues to be, “Hey, what’s for dinner?”