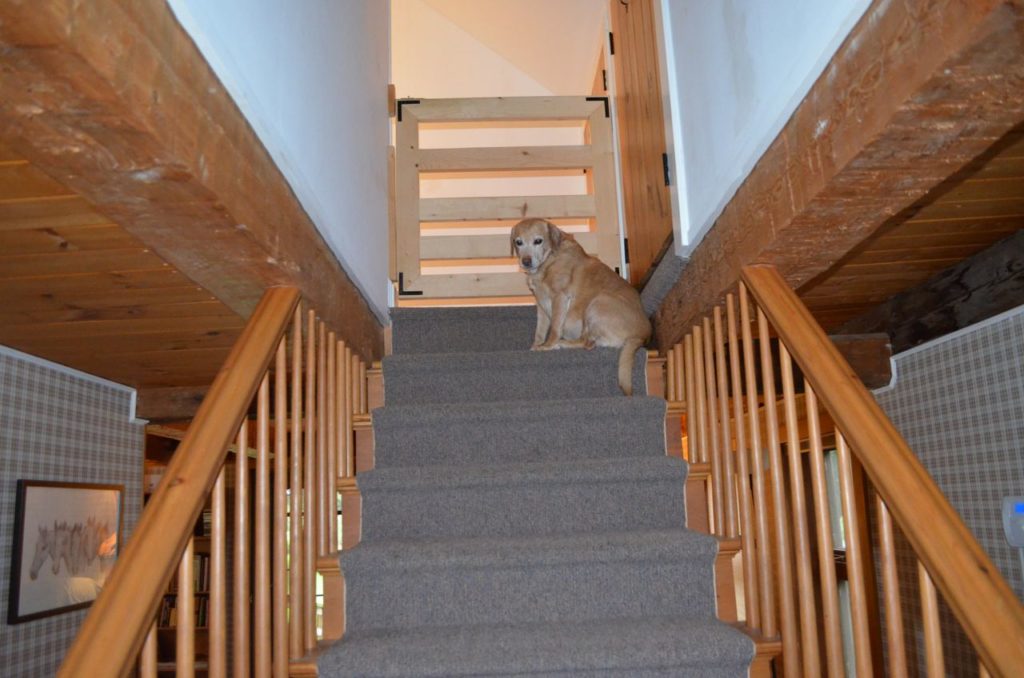 I took this photo at nearly 9 a.m. on a recent summer morning. All the other dogs had been outside, doing their business, since about 7:30 a.m. But Darla, possessed of a wonder bladder, had no interest in going outside yet, despite the fact that she’d been inside since about 8?p.m. the night before. One of the common refrains around here each morning is, “Has Darla been out yet?”

In this case, Darla knew I was looking to put her outside for her first-of-the-day potty break, and had gone up the stairs to try and hide out in her room. She hadn’t counted on the gate being latched.

So that’s where I found her.

You can tell from her face that she knows she’s about to be made to do something she doesn’t want to do yet. We haven’t actually tested the limits of her bladder — and don’t want to! — but she can hold it longer than any dog we’ve ever known. (I’d give anything for a bladder like that!) On this morning she was at 13 hours and still not in any rush to go pee.

I coaxed my reluctant girl down the stairs and outside, and before long she was back inside and headed up to her room again. This time with an empty bladder.

We received an email from the Shelter Challenge people late last week’saying we had won $1,000 in the latest round, coming in first in New Hampshire again. Thank you to everyone who voted for the farm! That’s an amazing gift for the animals here, and we are so grateful for your votes that made it possible!