You are here: Home / Dogs / My Clean Spleen And Other News While I Snooze 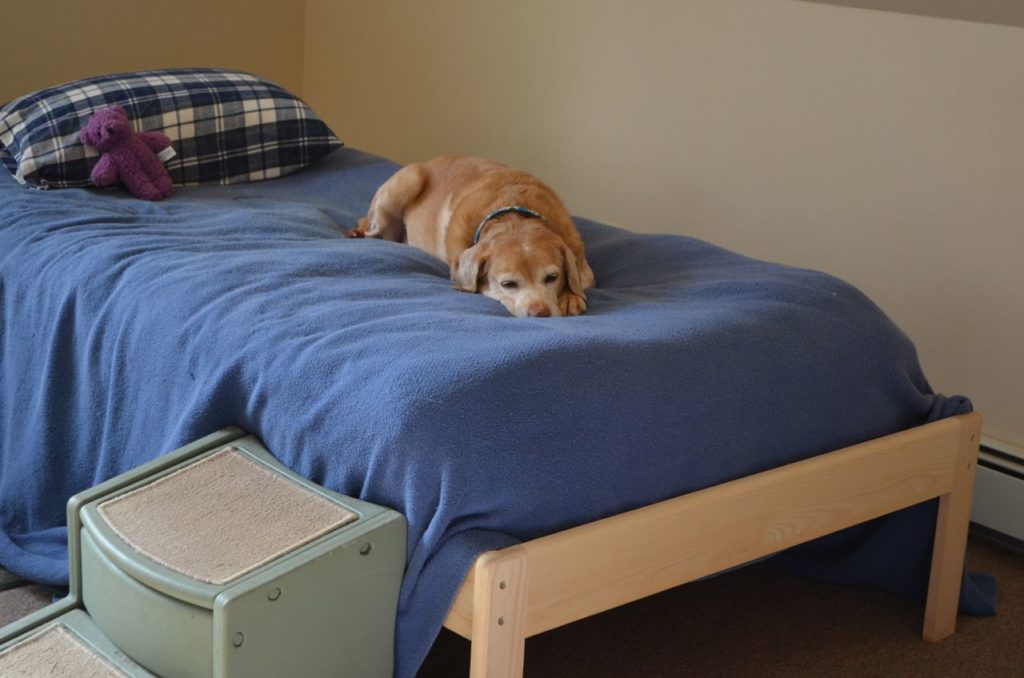 I took that photo a few minutes ago on this Monday morning. Darla’s been trying to go upstairs and get on her bed ever since coming back from cancer surgery, and because of the post-op?activity restrictions, we wouldn’t let her. But today I finally let her up the stairs and took her step-stool along so she could use that to gently climb up to the bed. She is now contentedly snoozing away as I write.

All last week we had been anxiously awaiting the biopsy results — right through Friday the lab’s online system kept saying they were “pending.” Finally, on Saturday morning our veterinary surgeon at Peak, Dr. Kurt Schulz, called with the just released report. It was good news. There was no sign of cancer in her spleen, and the margins around the mast cell tumors he removed were wide and clean as well. Two other suspect areas he had removed were benign. As Kurt was telling me this, I could just feel the tension release. Alayne and I had been nervous wrecks all week, waiting to find out. I asked Kurt, “So she’s good for another 10,000 miles?” He answered, “I’d say probably 20,000.”

Yet we know we are not out of the woods by any stretch. This was Darla’s fourth surgery to remove mast cell tumors (in my previous post I overlooked another one she had last February). It’s clear her body is a mast cell factory and that we will have to remain vigilant. But for now, we are thrilled with the news. If her spleen had cancer, we would only have had a few months left with her.

Thanks to all of you who posted such wonderful, supportive comments on the previous post. Alayne and I really appreciate it.

Now, if you don’t mind, Darla would like to get back to her nap!