You are here: Home / Dogs / My Cancer Is Back. And I Have The Scars To Prove It. 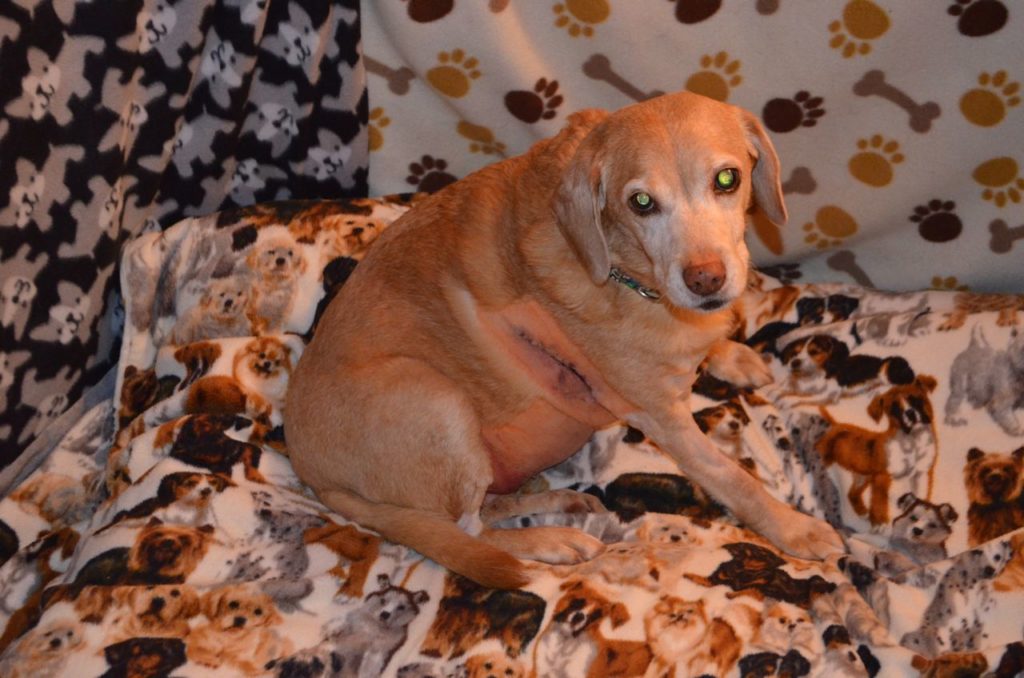 Last Thursday our beloved Darla had another extensive round of surgery to remove multiple mast cell tumors, as well as her spleen. I took the photo on Friday evening, after bringing her home from Burlington, where our surgeon, Dr. Kurt Schulz of Peak Veterinary Referral Center, had operated on her.

Two weeks?ago, while I was loving up Darla as she lay on her bed, my hand brushed across a small, flat raised surface on her side. I had felt this growth before — she’s had it for over a year — and we’ve had it tested three times because I was always suspicious that it was a mast cell tumor. The tests always came back negative. Yet it felt different now … I thought I could feel some “roots” in it. I called Peak and scheduled another appointment with the oncologist there, Dr. Kendra Knapik.

Sure enough, this time it had developed into a mast cell tumor. Then — and this was odd — while I was at Peak that day, I was out in the lobby, petting a nervous Darla while talking to our internal medicine specialist, when my hand brushed against another small growth, this one in her armpit on the other side of her body. I couldn’t believe it. Kendra did a needle aspirate of that one, too, and found mast cells.

Kendra recommended an?abdominal ultrasound of Darla’s organs and an ultrasound-guided needle aspirate of spleen and liver. The radiologist did this procedure while Darla was sedated. Kendra wanted to find out if her spleen and liver were cancerous, because if they were, there was no point in subjecting Darla to surgery for the skin growths because she’d only have a few months to live.

What they saw were some mast cells in her spleen, but not in sufficient quantities or in the kinds of “clumps” that’typically signal a tumor is present. Whatever was going on in there was very early. But they couldn’t be?definitive.

In calling me with an update on the pathologists’ collective review, Kendra told me about an expression they learn in vet school: “A good spleen out is better than a bad spleen in.” In other words, if there’s any doubt about a spleen, the dog is better off without it. It’s better to err on the side of caution — taking out a spleen that might be okay — than to leave a suspect spleen in the animal because of its ability to spread disease rapidly. If you’ve ever had a dog who’s had a splenectomy (we’ve done?many spleen removals over the years), they generally do just fine without them.

However, the only absolutely certain way to find out what’s going on in a spleen is a complete?biopsy, and that usually means taking the spleen out anyway.

Everyone involved in Darla’s case — the pathologist, internal medicine specialist, oncologist and surgeon — agreed that given Darla’s history and what we knew, based on the results we had, taking out her spleen was the prudent?course of action.

On Thursday, I drove Darla over to Burlington, and that afternoon Kurt took her into surgery. This was Darla’s third mast cell operation, in fact. Because of the multiple sites involved — one mast cell tumor on each side, another suspicious area in her mammary tissue that Kendra wanted removed as a precaution, and then her spleen — the operation’took a couple of hours to complete. I stayed in Burlington that night at a hotel across the street from the clinic so I could see Darla?after she recovered from the surgery, and to be nearby in case anything happened overnight.

Now, a few days later, Darla is definitely … if slowly … on the mend. She has excellent pain meds to help, and she has a good appetite. Her biggest problem is that she has no comfortable’side to lie down?on — she?has?incision sites and sutures everywhere except her back, and rolling over is out of the question.

Kurt sent in a biopsy from the spleen as well as a sample from Darla’s?liver since he had her opened up. We are now waiting anxiously for those results. The ultrasound-guided aspirates can give us a good indication of what’s going on, but truly definitive results come from actual tissue samples taken from different parts?of those organs. We could still be knocked for a loop.

So please keep your fingers crossed for our beautiful girl. She’s been through a lot. We hope this is it.

Our Winter/Holiday 2019 print newsletter is now in the mail. You can read it online here.