You are here: Home / Dogs / My Big Buddy 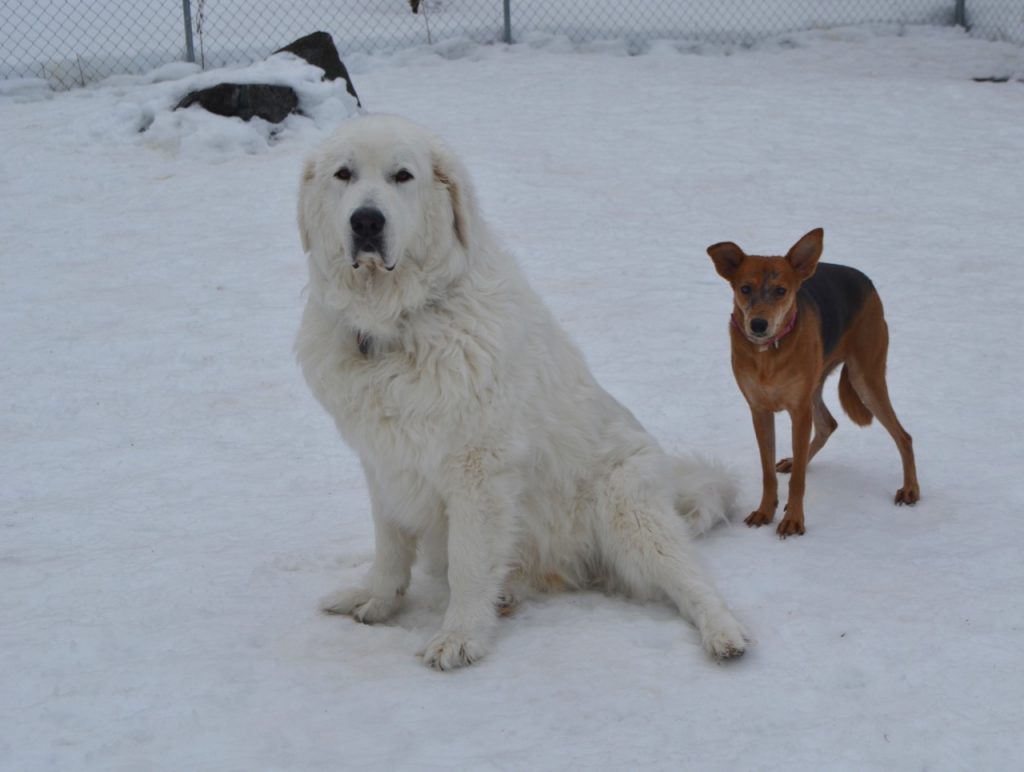 Whenever a new dog arrives, we’re always curious to see who he or she decides to pal around with once they settle in. And it’s not always who we expect. For example, it was just a couple of weeks after Roxy arrived from Aruba that we noticed she seemed particularly interested in Aaron, our big Maremma livestock guardian dog. (Yes, he’s as big as he looks — about 130 pounds, your classic gentle giant.)

Aaron’s job in the spring, summer and fall is to guard our poultry flocks on pasture. In winter, he hangs out in our sun porch, where my office is. His bed is on the other side of my desk, while Roxy’s favorite spot is a bed under the work table next to my desk. I don’t know if this proximity helped spark her interest in all things Aaron, but it wasn’t long before she was waiting to go outside whenever Aaron went outside.

She bolts out the door behind him, then trots along beside him as they make their way down the ramps to the dog yard. If he detects something in the air and starts barking, she starts barking, too. Roxy will often go running up to Aaron, doing little play bows, then run circles around him while he watches her. Sometimes she rears up in front of him, then drops down and starts running in circles again.

In truth, all the dogs love Aaron — he’s just that kind of sweet, lovable guy. But because Roxy is a sensitive, somewhat nervous girl, I think she also feels some comfort and reassurance from his calm, protective nature.

For a dog from the Caribbean, Roxy surprised us with her zest for cold weather and snow. She frequently stays outside longer than most dogs — other than Aaron, that is, who happily stays outdoors in single digit temperatures and ignores our calls to come inside. It took Roxy only a few weeks to adapt to winter, and now we’re frequently calling her to come in and get warm.

But if her big buddy isn’t outside, neither is she.