You are here: Home / Millie the blind Labrador retriever 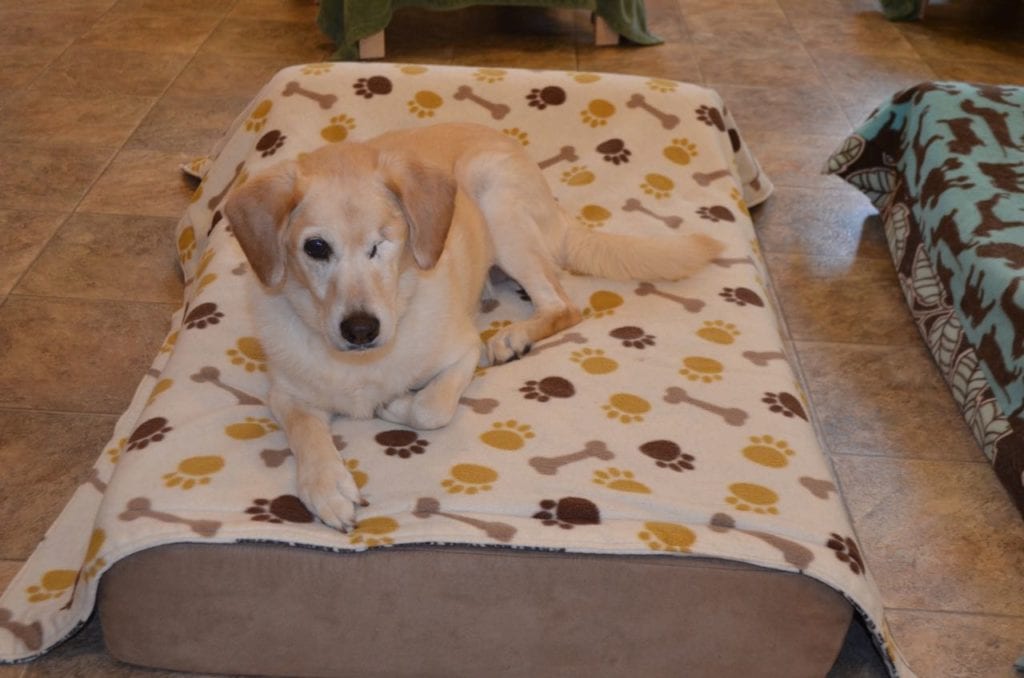 Millie was blind and diabetic, which apparently became too much of a burden for her family in Texas. They decided to have her euthanized. Millie was only 8 years old, with perfect house manners and a loving, sweet personality. A family friend, who had known and grown to love Millie, was horrified at the idea of her being euthanized, and contacted us about taking her.

When we agreed, she rushed over to the family’s house on the same day, picked up Millie, and then fostered her for a few weeks until our transport could get there. The family knew their friend had reached out to rescue groups?and were fine with her making the?effort, as long as Millie went somewhere else.

Once here, we scheduled a full round of appointments with our veterinary specialists. In addition to being blind and one-eyed (she had lost her left eye earlier due to glaucoma), Millie was very skinny at only 40 pounds, so we needed to make sure there wasn’t an underlying medical problem. It turned out all she needed was a change in her insulin dosage and yes what every Lab wants to hear more food! Soon she was gaining weight.

Our veterinary ophthalmologist found that the lens in Millie’s right eye had a dense cataract and was also luxated, or displaced, inside the eye. The pressure inside that eye was at the high end of normal. This indicated she might have been going into early secondary glaucoma, but that in itself did not rule out surgery to restore her vision. Millie’s retina was working fine, which was the most important thing.

During the surgery, the ophthalmologist?removed the luxated lens and replaced it with a synthetic lens. Because of Millie’s risk for glaucoma, the doctor?also performed a complex procedure called endolaser cyclophotocoagulation, in which she used a tiny endoscopic laser to shut down a part of the ciliary tissue that produces the internal eye fluid. Less fluid meant less chance of glaucoma.

Initially the recovery from surgery went well, and Millie could see again. But unfortunately, then her retina began to detach first the upper part, and then the lower part. Soon she was blind once more. We were heartbroken.

But Millie?? She was as happy, affectionate and playful as she?d been before. You would never know she?d had her vision restored briefly, only to lose it again. She continued to find toys on the floor, pounce on them, then fling them through the air and bound off to go looking for them.

It wasn’t long after her eye surgery that Millie began to seek out Steve in the evenings for some special bonding. She would insist on climbing into his lap, and it didn’t matter if he was reading a book or holding a laptop whatever he was doing had to make way for her. By this point she was up to 50 pounds, which was like having a grain sack dropped in your lap. 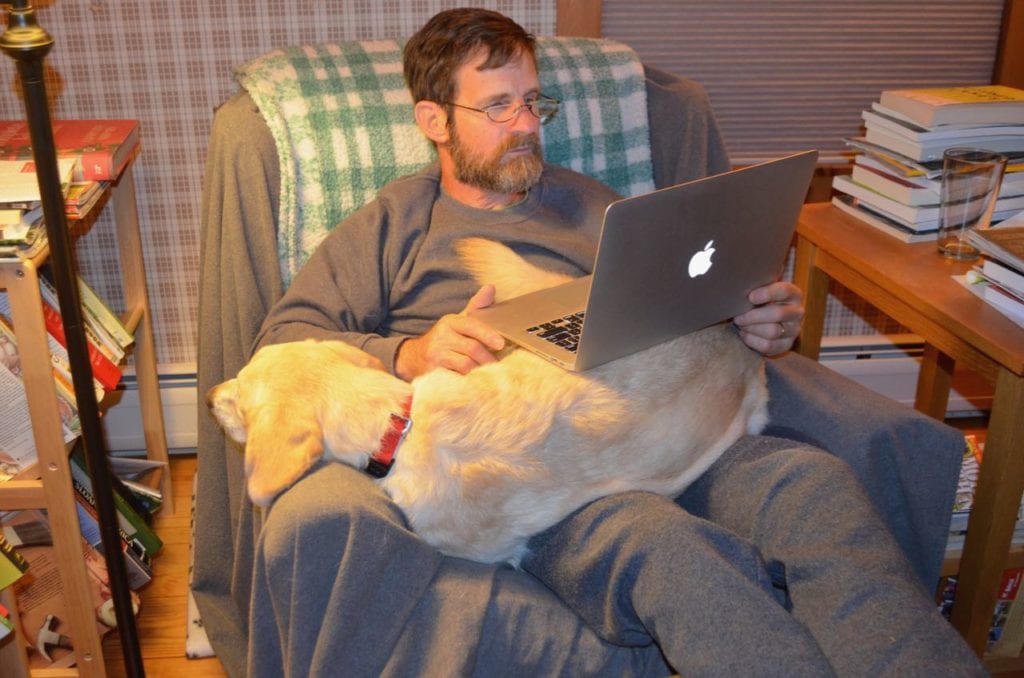 She?d climb right on up no invitation required turn around a few times on him, then settle down for a snooze. We joked that Mille was actually a Lap-rador Retriever. Almost every evening now, she gets on Steve’s lap for 15 minutes or so, then climbs down.

She also bonded with our three-legged boy Tanner, who quickly became her best friend and wrestling buddy. These two can play for hours together until they wear themselves out. 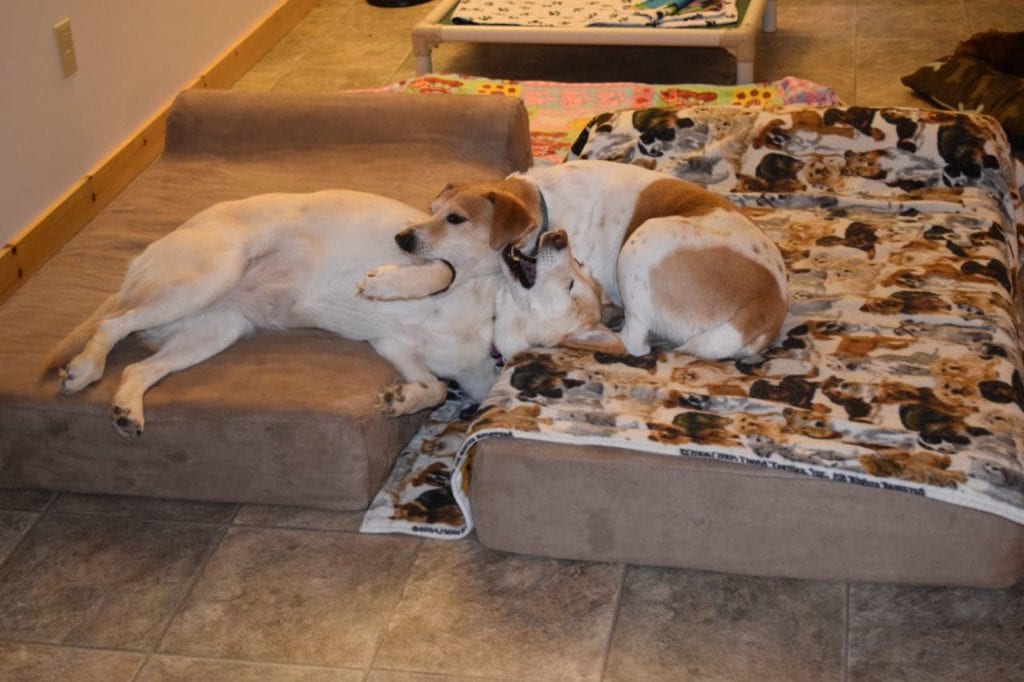 Whenever Millie’s away at the veterinary clinic for her diabetes checks, Tanner frets and then literally leaps with joy when she comes home again.

So thanks to a family friend, Millie got another chance to enjoy life and she certainly does! 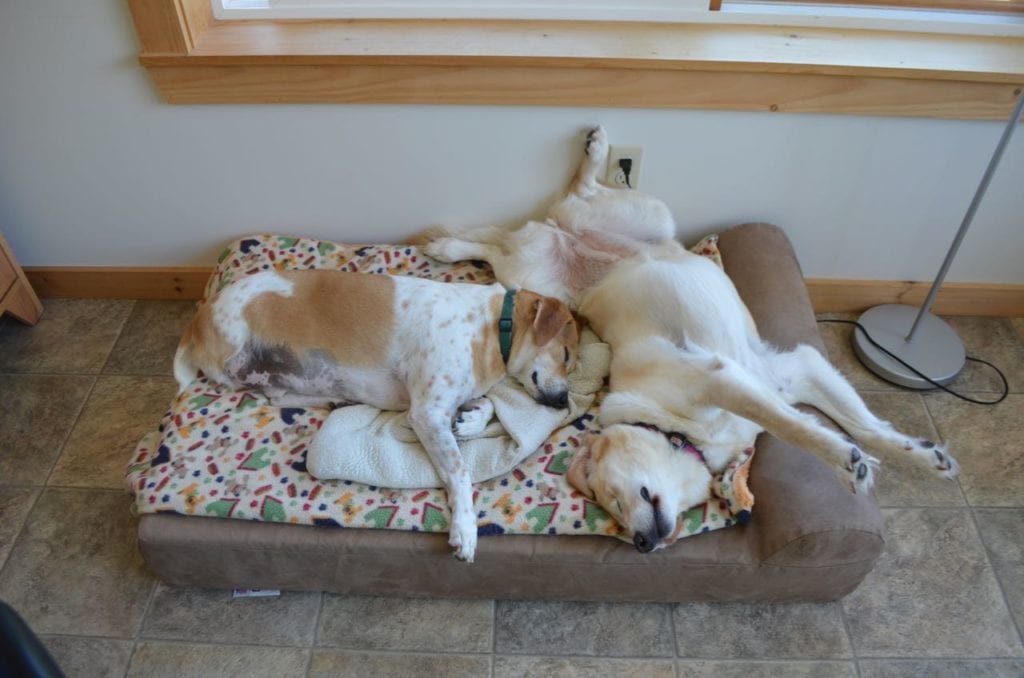