You are here: Home / Meet the Animals / Travis the dog with a fused jaw 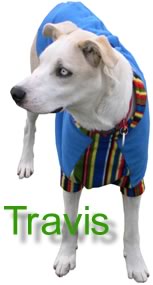 Spokane Animal Control called us about a skinny, stray dog who couldn’t open his mouth. They e-mailed a photo showing him looking both frightened and emaciated. With a jaw fused shut, he was considered unadoptable.

We asked our veterinary surgeons in Spokane to do an exam. If the dog had a major orthopedic problem, they would be the ones doing the operation anyway.

The surgeons called us with the news: The dog had a rare jaw muscle disease called masticatory myositis. Surgery wasn’t an option.

Our internal medicine specialist in Helena said we could attack the disease with drugs, although the chances of success weren’t good. In the meantime, we could put in a stomach tube for feeding and medicating.

When we first saw Travis, we couldn’t believe how shut his jaw really was. He couldn’t get his tongue out. We couldn’t get a finger in. We learned how to feed and medicate Travis through a stomach tube. The disease had progressed too far and after months of drug therapy, we managed to get his mouth open only of an inch.

But we also learned that Travis could eat enough on his own if we blended up a special liquid food that he could happily slurp. And he wants to eat! Four times a day, he slurps away.

The other dogs love Travis’ special food. They wait for him to finish so they can lick his bowl clean. Because Travis can’t lick the bowl clean himself, there’s always something left!

Travis also gets a special wardrobe. To keep him from pulling out his stomach tube, he always wears clothing to cover it up. He has both cool weather gear and summer outfits made by a wonderful volunteer.

Along with good nutrition came energy and lots of it! This youngster takes off like a rocket and races around the yard. He loves wrestling with his other disabled friends.

The fact that he can’t open his mouth to grab doggie legs while wrestling doesn’t hold him back Travis uses his front teeth like a saw. He can’t bark, either, but makes a muffled “woof” sound with his cheeks puffed out.

Travis knows he’s more than ‘different’. After all, with his own culinary creations and fashion wardrobe, he thinks he’s downright special.