You are here: Home / Meet the Animals / Stella the blind Lab 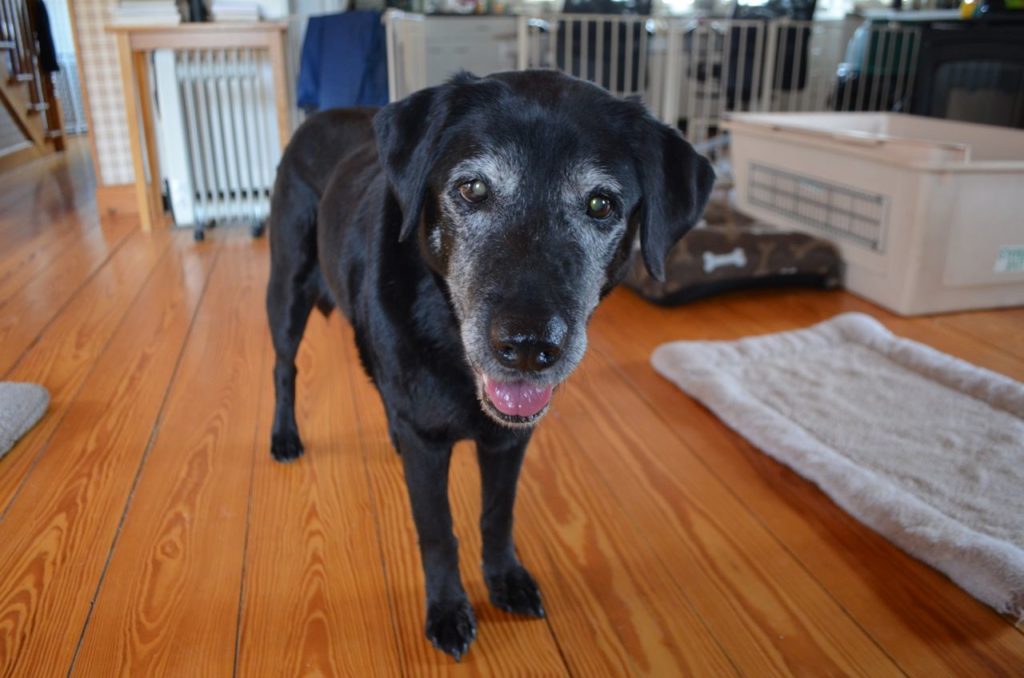 Stella’s owners turned her into a Louisiana animal control shelter in April 2014. Under Reason for Surrender? on the intake form, they wrote: We want to get a puppy. They didn’t even bother to write their dog’s name on the form. Then they walked out, leaving her behind old, blind and suddenly nameless.

A local rescue group knew she would be quickly euthanized and asked if we could take her. We urgently had to get her out and arranged to board her at a nearby vet clinic until our transport could get there. The rescue group which had named her Stella pulled her from the shelter and took her to the clinic.

She arrived there emaciated, full of worms, and heartworm positive. When Steve called the clinic to review the things we wanted done for Stella, the veterinarian came on the line. He said, Mr. Smith, I don’t understand something and I hope you don’t mind my asking. Why are you going to all this trouble and expense for an old, blind dog? Our local shelter has many adoptable dogs you could take instead. I?m mystified why you would do this.

Steve explained we were a nonprofit and our mission is to rescue dogs like Stella precisely because they are disabled and elderly and considered unadoptable. The vet was gracious if still somewhat baffled by our decision to rescue Stella, but he and his staff took good care of her.

Once here, we took Stella to see our veterinary team in Burlington. First was an eye exam by our ophthalmologist, Dr. Sarah Hoy: 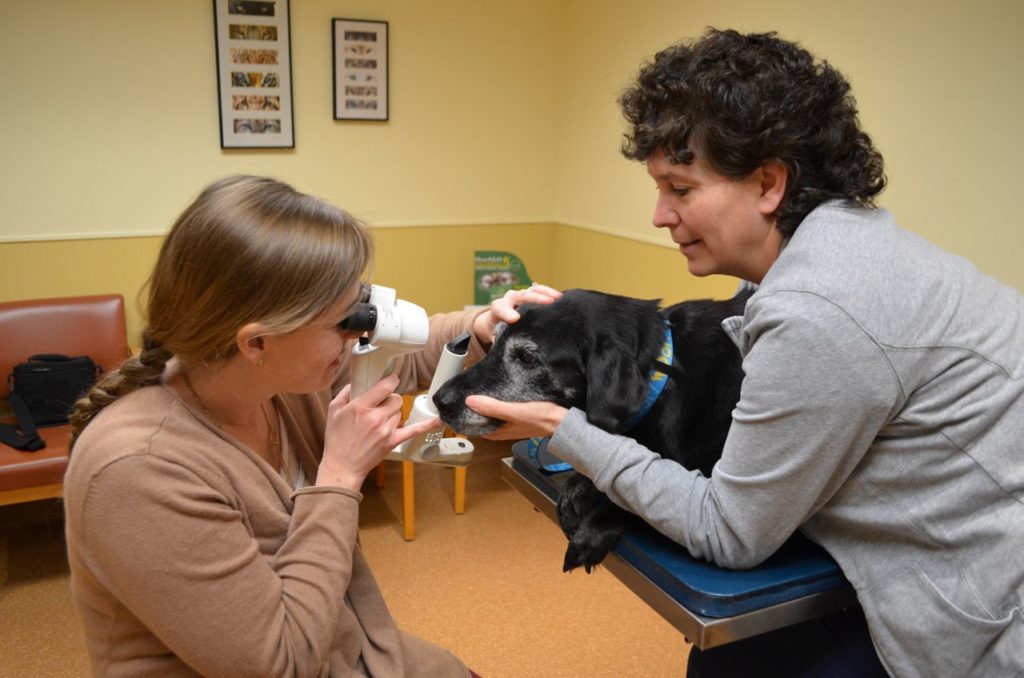 She found Stella is blind from progressive retinal atrophy and is developing cataracts, too, so she will need regular monitoring. For now her eyes are very comfortable.

Then came a heart exam, an ultrasound of her organs, and blood work. Here she is having an echocardiogram from the cardiologist, Dr. Don Brown: 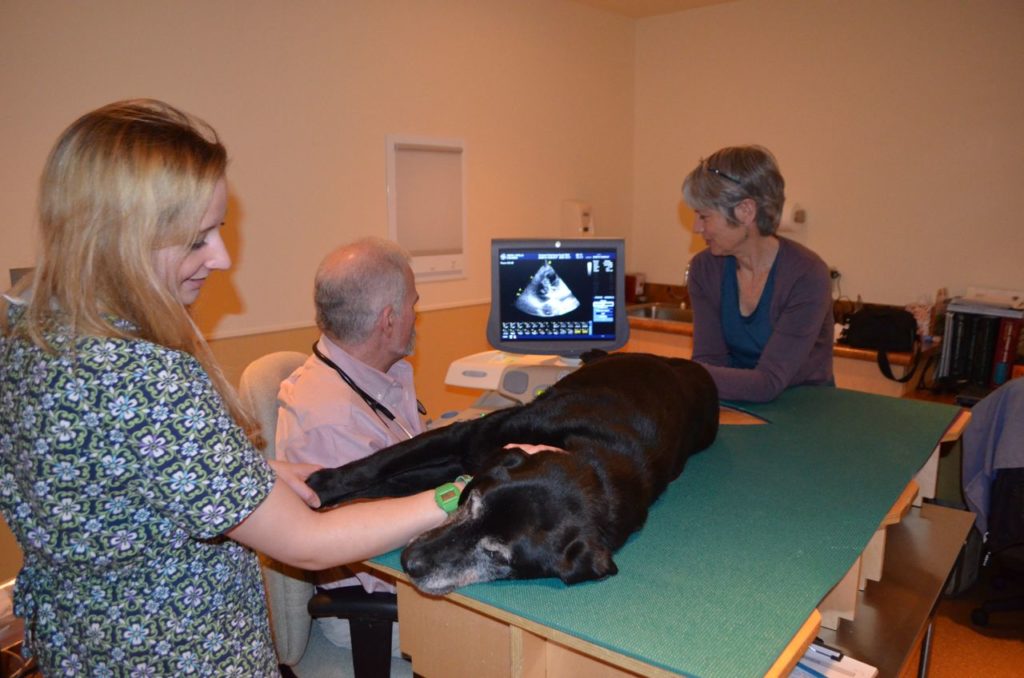 At the end of her day with the doctors, we were relieved to learn that aside from heartworms, Stella turned out to be in remarkably good health despite her age and her history of neglect. She’s also now completed her heartworm treatment.

Back at the farm, we immediately came to adore this girl. She is so loving and affectionate and, as we discovered, quite energetic despite her age! In fact, she likes nothing more than to roughhouse. That’s right, this gray old lady likes to wrestle and climb all over us. It will start with us loving her up, and pretty soon she’s getting mouthy and begins pushing at us with her face, pawing at us, then trying to climb on top of us. Stella has a big, happy smile the entire time.

She also likes to grab chew toys, toss them around, pounce on them, then flip them around: 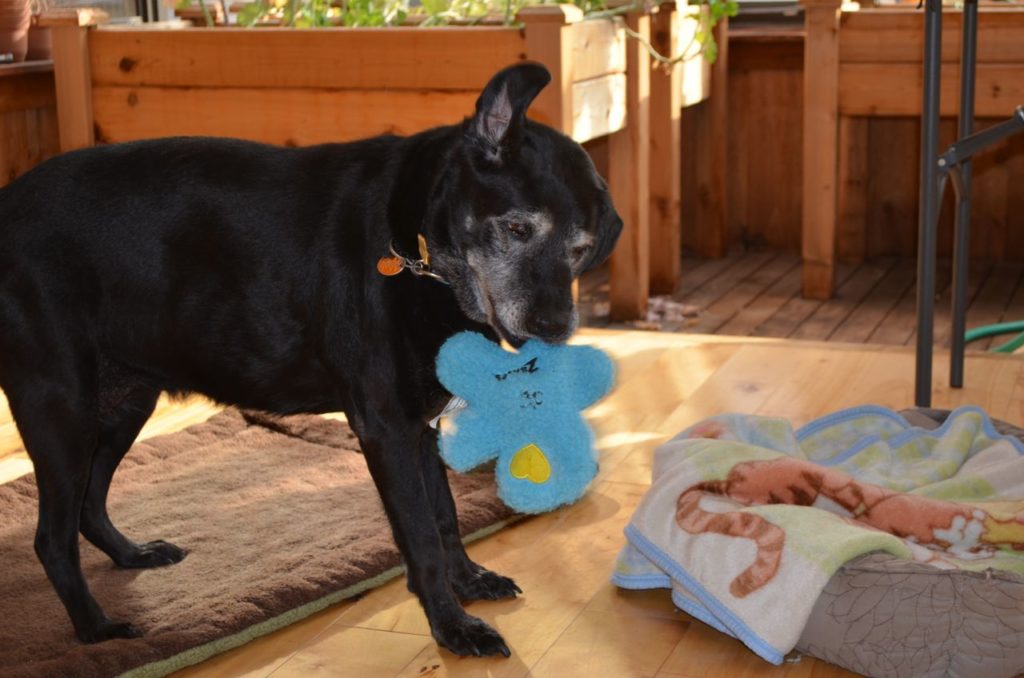 When we let her outside, she often does a spontaneous 360? twirl out of pure joy, then sets off to explore the yard: 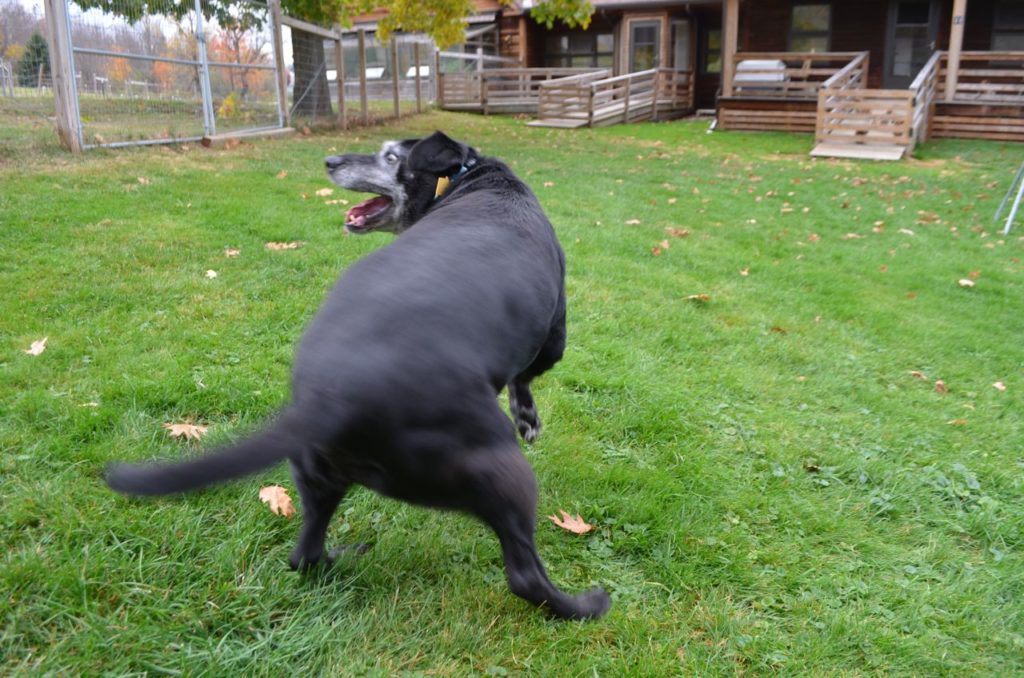 We also learned she likes a good game of tug-of-war. Steve was folding laundry in the laundry room when she came in. He had a towel hanging down from his hands, and Stella walked into it with her face. She instantly grabbed the towel with her mouth and the tug-of-war was on. When Steve finally pulled the towel away, Stella decided she wasn’t quite finished with the game she proceeded to gently grab his pant leg and began tugging on him instead!

Given that Stella was neglected her entire life, it’s sadly ironic that the best thing her owners could have done for her was to turn her in. Now she gets another chance at a new life and she’s loving every minute of it! 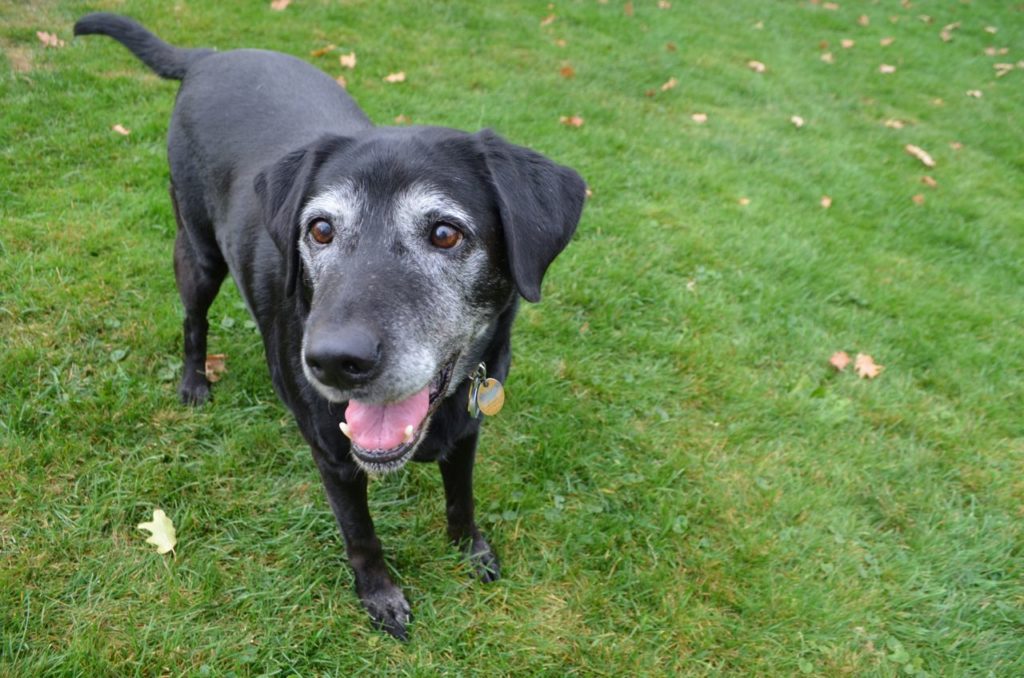