You are here: Home / Meet the Animals / Spinner the blind and deaf dog 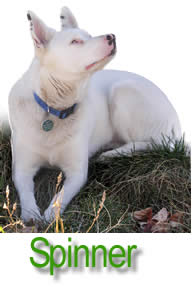 A Humane Society in Spokane called us about a blind and deaf female dog they couldn’t adopt out. Until this dog arrived, we thought we’d seen almost every eye condition possible. But her eyes were altogether different they were completely white.

We watched this happy, beautiful girl race around the yard spinning in tight circles, head straight up, nose pointed skyward, barking as she went. We named her Spinner.’

When you’re blind and deaf, your nose is all you have to work with. It took us a while after Spinner arrived to realize that smells in the air triggered her, just like a ‘normal’ dog would react to new sounds or sights by barking.

Spinner, barking: ?Wow, what is that cologne he’s wearing?!?

Often we can’t notice the smells she can, so it looks like she’s just having a spontaneous outburst. But there’s something in the air, and she knows it. She reacts to faint smells the other dogs never seem to detect. For her, it’s the arrival of something new she doesn’t know what, but she barks to tell us about it.

Our vets discovered that Spinner has a very rare eye condition in which the eyeballs rotate down toward the bridge of her nose. The white we were seeing was the back of her eyeballs! Follow-up surgery by an eye specialist did not succeed in restoring her vision.

For now, Spinner relies entirely on her nose as her source of data’ about the world. She is most animated first thing in the morning, when we let her out of her cottage. She bursts through the door, spinning in little circles, barking, with her nose pointed up in the air. It’s her way of greeting the world and finding out what’s new.

For this girl, it really is only the nose that knows.