You are here: Home / Meet the Animals / Happy Endings / Winchester the miracle cat 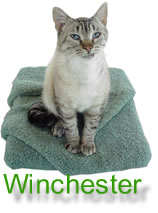 This is a long story but Winchester has a lot to tell.

A young lady in Avon, Montana, e-mailed us about a cat she had found. She wrote:

I heard about the Rolling Dog Ranch Animal Sanctuary from my boss at the Avon Family Cafe. Her vet was coming to see her horses and she said that she could look at my cat. Well, he’s not really mine, but I’m his. He wandered in to my yard a couple weeks ago, after an obvious accident, or some sort of attack. He was so skinny and obviously starving, and I couldn’t turn him away. I went into the house and got some canned dog food (that’s all we had). He ate it, and has been on my front porch ever since.

I am a teenager living at home and I will be leaving soon, and cannot take him with me. My parents can’t keep the cat, and if I take it to the Humane Society his chances for survival are not very good. The vet prescribed an antibiotic that we will administer over the next week, because he has an abscess on his neck and the lower lid of his left eye.

He has an old injury to his leg that the vet said is too old to fix, and he will always be lame. He only has three teeth, well, that’s all I could see but his mouth is swollen, so they could be hiding.

I know that my cat may not be as sick as the other animals there, but I have seen how loving this cat is, and I know that he deserves a chance, a chance that I can’t give him. I kept him alive when he was about to die, but I can’t give him a good life. I hope you can take him or find a good home for him.

Well, her note almost brought tears to our eyes. We e-mailed her back the same day and said we could take him, but we asked her to drive the cat straight to our vets in Helena.

Our vets called right after they did the exam. “Did you know this cat has been shot four times?” We couldn’t believe it.

The X-rays revealed what happened: Lodged in his abdomen was a. 22 bullet. Another bullet had pierced his back and stopped just 15 mm from his spine. One bullet had ripped through his rear leg, leaving no fragments behind. And the fourth bullet had hit him in the front of his mouth, shattering some teeth and ricocheting out through his neck. Other smaller bullet fragments were scattered around his body. See his X-rays?here.

Our vets were as astonished as we were. How did he survive on his own without any medical care? How did he make it outdoors without shelter in cold weather, fending for himself with four bullet wounds? His wounds were weeks if not months old; that’s why it wasn’t readily apparent he had been shot.

We hadn’t even seen him yet, but we knew what to name him: Winchester. And a miracle cat he is.

After a week in the hospital, Winchester came home to the ranch. Our vets saved for us the bullet they took from his abdomen. They decided it was safer to leave the bullet near his spine alone, rather than risk opening him up to remove it.

This small, loving guy is now happily living in the sanctuary’s cat house. He is one of the most affectionate cats we’ve ever known. It takes Steve twice as long to clean the cat house every Saturday morning, because Winchester is constantly circling his feet, rubbing against his ankles, wanting to be picked up and loved. Winchester also eagerly rolls over on his back to have his tummy scratched. (As a rolling cat, he thinks we’re a little “species-centric” to have named this place the Rolling Dog Ranch.)

Questions still remain: Who shot him and why? We’ll probably never know. Our guess is that a punk with a. 22 rifle saw this little cat walking across a pasture and decided to use him for target practice.

Thanks to his own incredible will to live – and a young lady in Avon with a big heart – Winchester survived. Now he’ll never be in harm’s way again.

Update August 2005:?Winchester was adopted by Laura B. of Helena, a long-time volunteer of ours.