You are here: Home / Meet the Animals / Happy Endings / Nevada the blind puppy 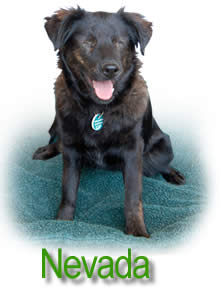 A young man found a blind puppy by the side of the road in Elko, Nevada. Thinking someone had injured her because she had no eyes, he took the puppy to a vet clinic. The vet found the puppy was blind from birth, not from abuse. Relieved at the news, the young man then took her to the local animal shelter.

The shelter staff fell in love with this adorable little girl, but couldn’t find anyone to adopt her. A wonderful lady in California, Dara O., volunteers long-distance for this shelter, trying to find options for animals at risk of euthanasia. Dara emailed us to say:

“I have contacted several other rescue organizations, and unfortunately none of them were able to help her and her time is running out.”

We told Dara we could take the puppy. Now, normally when we agree to take an animal from an out-of-state shelter, we have to arrange and pay for the travel. Not this time. Dara made the reservations, paid for the airfare, and got everything organized. All we had to do was say yes, and that was it!

The shelter staff took the puppy to the Elko airport to catch a flight to Salt Lake City and then on to Missoula.

Back at the ranch, we let this blind puppy out of her crate and immediately all she wanted to do was romp and play. She kept jumping up on us and running circles around our feet. Then she’d whirl around, roll over, get up and do it again. We decided to name the little tyke Nevada, after her home state.

Nevada quickly became everyone’s friend. Her two favorite buddies were the wobbly sisters, Soba and Noodle, but if they were occupied, she’d always find someone else to play with. Frequently we’d find her curled up with a friend, sleeping off yet another romp. 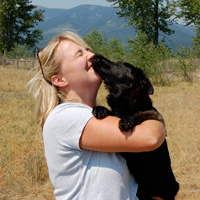 Nevada’s story gets even better! Cassie and Brent B. of Hamilton, Montana, longtime friends and supporters of the sanctuary, fell in love with Nevada during a visit to the ranch. A few days later they asked if they could adopt her. That was another “yes”!

When Cassie came out to pick up her new puppy, it was as if Nevada knew this was her new Mom she kept jumping in her arms and kissing Cassie all over!