You are here: Home / Meet the Animals / Happy Endings / Creighton the blind puppy 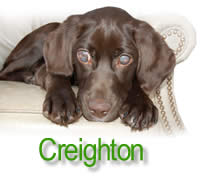 The e-mail to us simply said, “Please can you take this 4-month old puppy?” The message came from a lady who runs a rescue group in Vicksburg, Mississippi. We clicked on the photos she emailed and found ourselves looking at a blind Lab puppy with bulging, ulcerated, and clearly painful eyes. The puppy’s name was Creighton.

We agreed to take him, and we flew Creighton from Jackson to Minneapolis and on to Great Falls, where we picked him up at the airport.

Creighton was, in a word, adorable. He was cute, sweet, affectionate, and smart. With puppy exuberance, he bounced around the house, slapping his paws on the floor with that exaggerated gait we often see in young, blind animals. Creighton was a happy and cheerful little boy who jumped up and down to greet us, sometimes spinning in a complete circle! Being a puppy, he could go from too-much energy to sound-asleep in five minutes.

But his eyes were as painful as we thought. He yiked whenever he bumped into anything, and his eyes just seemed to throb. We took him right away to our vet clinic for a thorough eye exam, but there was nothing our vets could do to restore vision. And the only way to eliminate the pain was surgery to remove his eyes.

The week Creighton had his operation, we received another email about this blind puppy. A couple from Olympia, Washington, Peggy and Matt M., were asking about adopting him. It turns out they already have two blind chocolate Labs and wanted to add another to the family! One of their blind Labs, in fact, is also an award-winning therapy dog. Peggy wrote, “We share your belief in the potential of disabled animals to lead full lives.” 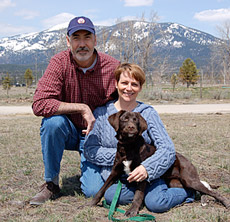 So after Creighton got through his surgery and post-op period, Peggy and Matt drove out to the ranch to meet him. They fell in love with Creighton, and he with them. He kept kissing Peggy the entire time they were here!

Back home in Olympia, Peggy emailed us to say that Creighton has already mastered the stairs, made his first unofficial therapy visit, and is now playing fetch with tennis balls. She wrote, “Stay tuned, more to come. This little guy is only just beginning to show his magic.”