You are here: Home / Meet the Animals / Happy Endings / Charlie the once-blind Beagle 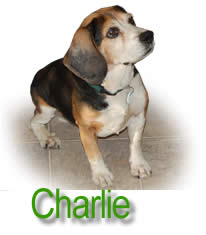 We’ve only been able to do this once before, several years ago. Ever since, we’ve waited for another chance to come along, because there’s nothing like giving a blind animal his or her sight back. Usually our animals have gone blind from causes that can’t be reversed.

But when Charlie arrived as a blind Beagle from Georgia earlier this year, we noticed his pupils reacted to the camera flash when we took his photo. That meant his retinas were detecting light. Maybe he could see behind his thick cataracts? We tried not to get too excited, because only about 50% of dogs with cataracts are candidates for surgery usually because the retinas aren’t working well enough.

Our vet also found the same pupillary light reflex we had seen in Charlie while taking photos. Next came an electroretinogram, or ERG, to confirm whether his retinas were really working. The answer: Yes! He could indeed have surgery to restore his vision!

Steve then drove Charlie to our ophthalmologist in Spokane, Washington. Normally the surgery takes about 75 minutes; Charlie’s cataracts were so old and dense it took 165 minutes. But when he awoke from anesthesia and started to get his bearings, it was clear Charlie could see. During his post-op evaluation, he saw the exam room door was open and walked out.

Back at the hotel, Steve took Charlie for a walk and watched as he looked in awe at everything around him. Vehicles moving, birds flying, people strolling Charlie soaked it all in. In the hotel room, Charlie kept going over to the mirror to stare at himself. It’s as if he was thinking, “I’m as handsome as I thought I was!”

But nothing compared to his excitement the next day when he saw Alayne for the first time. Charlie kept jumping up and down, trying to get closer to her face. His tail wagged so fast we thought it might come loose. He could barely contain himself. 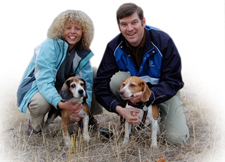 How can it get any better? A wonderful couple from Olympia, Washington, Julie and Richard S., adopted Charlie as a companion for their other Beagle, Hugo. Julie takes Charlie and Hugo for a walk every morning, and Charlie gets to see all the sights along the way.