You are here: Home / Meet the Animals / Gone But Not Forgotten / Pappy the old German shepherd 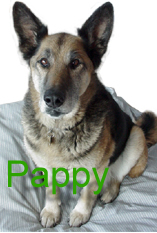 When a local rescue group first contacted us about Pappy, it sounded like a hospice case: an old, sick, emaciated German Shepherd who wasn’t going to last much longer.

He had appeared late one summer evening in the doorway of a local video store. He was thin, dehydrated, and tired. He limped into the store and lay down. Not knowing where he came from, and unable to get him to move, the store owners let him spend the night there. The next morning they took him to the rescue group.

They named him Pappy and started caring for him. A week later he came to the sanctuary. He weighed all of 50 pounds. We whisked him to our vets in Helena for a medical exam. In particular, we wanted to know why he limped. X-rays showed he suffered from a completely dislocated hip, with bone grinding on bone. The pain was awful. No wonder he looked the way he did.

We scheduled surgery for the very next day. There was too much scar tissue to get the ball back in the socket, so our vets cut the ball off and re-set the leg, re-attaching the muscles so they provided the support once provided by the hip joint.

We picked up Pappy three days later. He was an entirely different dog. The haggard, sad look was gone. Even though he was still recovering from major surgery, he was happy and almost playful. He smiled, wagged his tail, and cocked his head as if to say, “Can I go home now?” We were stunned by how much he had changed.

He’s now the resident “chore patrol” dog. Every morning and evening he follows along as we attend to barn duties. He’s frisky enough that he even races us back to the house (he wins). He rolls on his back in the grass, runs ahead on walks, and won’t let us go to town without taking him in the truck. This old dog just loves his new life on the ranch.