You are here: Home / Meet the Animals / Gone But Not Forgotten / Ellie May the blind and deaf Cocker Spaniel

An elderly woman in Montana died without leaving instructions on what to do with her blind-and-deaf Cocker Spaniel, Ellie May. The person handling the estate, Robin M., realized that given Ellie May’s age at least 10 and disabilities, she wasn’t a candidate for a shelter. A vet recommended Robin euthanize Ellie May.

When Robin called us, she said, “This little dog is still full of life, how could I do such a thing?” So Robin drove Ellie May out to the ranch. We were shocked when we saw her eyes. They bulged and were red and inflamed clearly painful. She needed medical care right away.

Our vet in Helena, Dr. Brenda Culver, examined Ellie May and found she suffered from?three?eye disorders uveitis, cataracts, and glaucoma. We couldn’t save her eyes, and the only way to eliminate her pain was to remove them. This senior girl came through surgery just fine and she left the hospital pain-free for the first time in years.

We like to joke that Alayne has an entire squad of “minions” all the Dachshunds and other “short-legs” who worship her and follow her everywhere. Well, Steve never had a real minion until Ellie May showed up and from Day One, she’s never left his side.

Even though she can’t hear or see a thing, Ellie May uses her phenomenal nose to keep an “eye” on Steve. Whenever he’s working at his desk, she’s sleeping on the bed next to his chair. If he leaves the office, Ellie May follows along. While he’s cooking dinner, she sits by the stove. And at mealtime, Ellie May parks herself next to Steve at the dining table.

She doesn’t have separation anxiety or get upset when Steve’s not around. She’ll look for him, and if she finally realizes he’s not in the house, she heads into his office and waits till he returns. 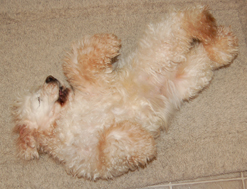 When he does return,?oh, what a celebration! She lets out little barks of joy and then throws herself over on her back, rolling and rolling with sheer delight.

Steve’s waited a long time for a minion of his own, and it took Ellie May a long time to find her man, but now the two of them couldn’t be happier!