You are here: Home / Meet the Animals / Aurora the blind dog 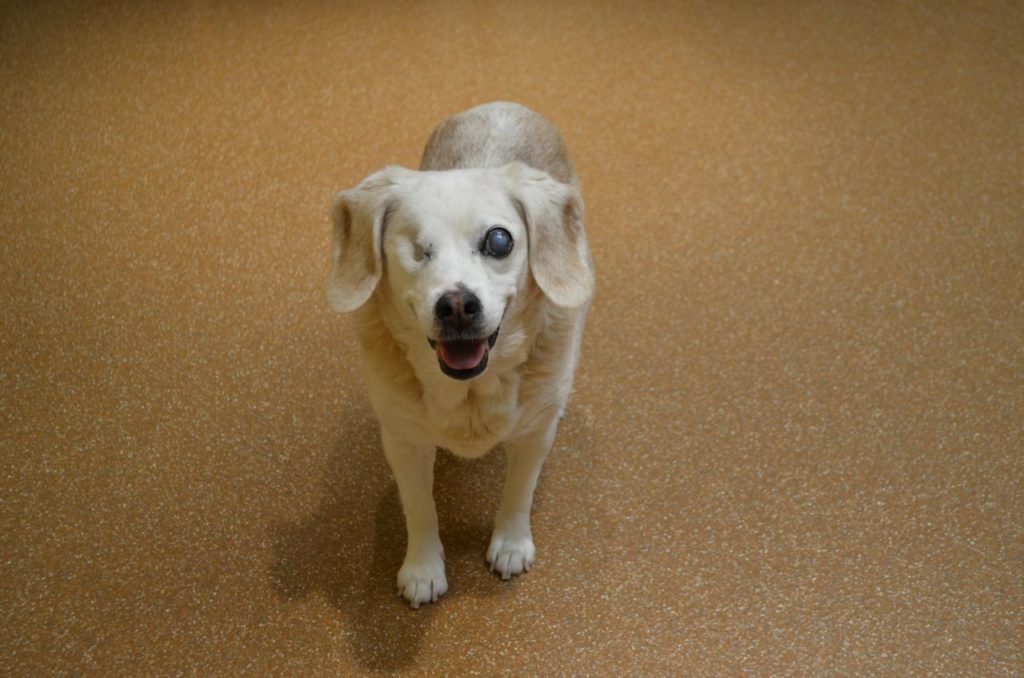 Atlanta Beagle Rescue pulled Aurora from a West Virginia shelter, where she had been described as a sad, old, blind dog. As they discovered, that wasn’t really accurate. The rescue group had to remove Aurora’s right eye because of corneal ulcers, but she had partial vision in her other eye. Still, they were unable to adopt out this cute one-eyed girl after many months of effort, and asked if we could take her.

Once here, we took her to our veterinary ophthalmologist, Dr. Sarah Hoy, who diagnosed her with a progressive eye condition called corneal endothelial degeneration. There is no cure, so she’s gradually losing her remaining vision. But despite the appearance, her eye is comfortable and pain-free. (Update April 2015: Aurora has now lost the rest of her vision and can only see shapes and shadows.)

Meanwhile, Aurora became a whirlwind of activity and inquisitiveness who followed us around, always wanting to be involved in whatever we were doing. We came to adore this little lady, and she settled happily into her new life with us. All seemed well, until February.

That’s when she developed terrible neck pain. She initially responded to medication, then didn’t. We took her to our specialists at Peak Veterinary Referral Center in Burlington, Vermont, for more diagnostics. This is our internal medicine specialist, Dr. Marielle Goossens, starting her physical exam: 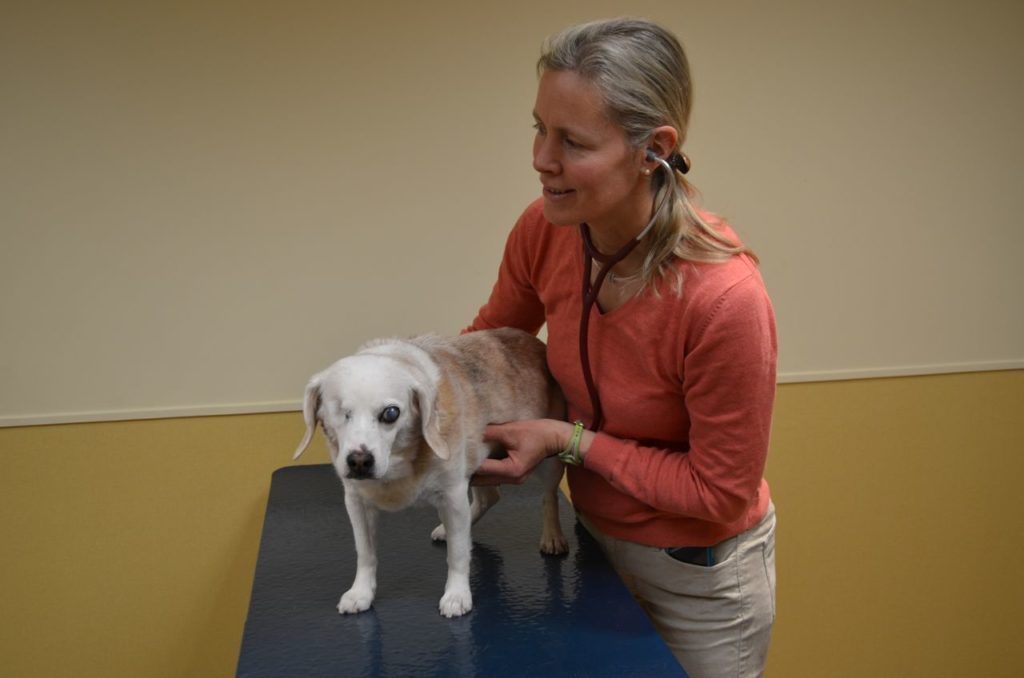 Among Aurora’s many tests that day were a myelogram and a CT scan of her neck, which is what you see here: 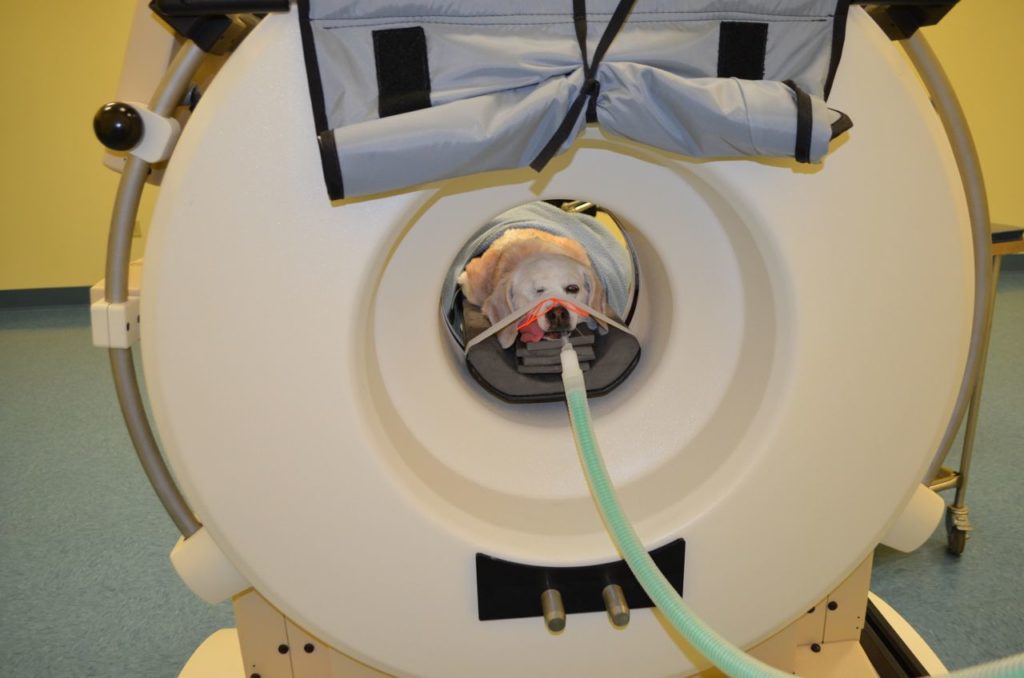 Though the imaging revealed some compression in a few neck vertebrae, it wasn’t enough to explain the pain she was exhibiting.

But the cardiologist, Dr. Don Brown, found something disturbing in Aurora’s mitral valve during his echocardiogram: 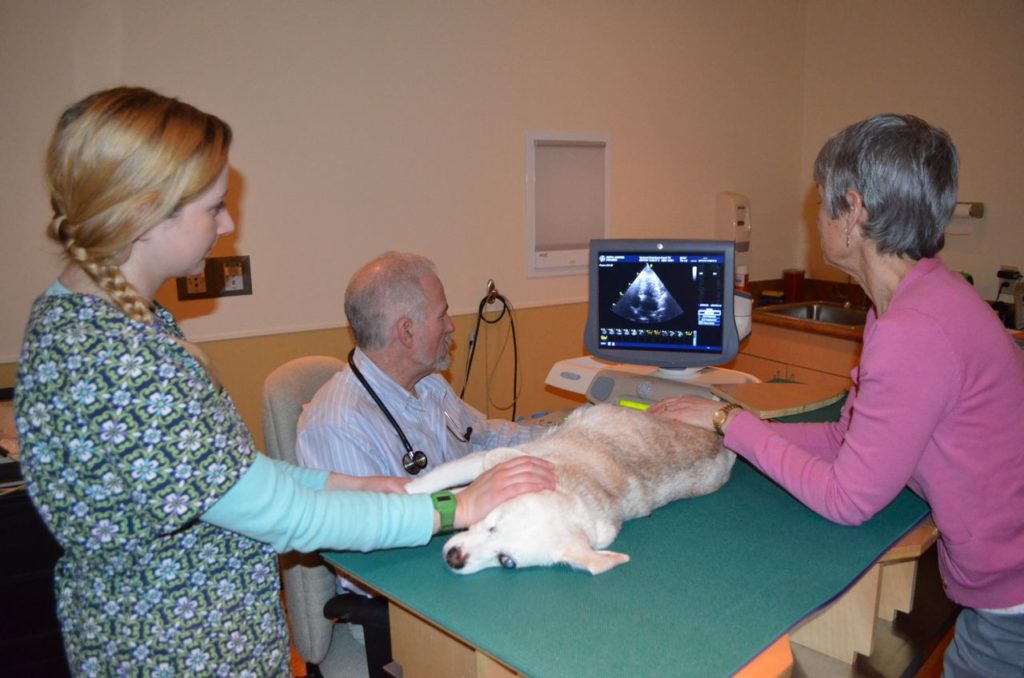 It was an object loosely attached to the valve wall with thin fibers. It floated around, buffeted by the blood flow. He wasn’t sure if this was tissue, i.e., an abnormally formed part of the valve wall, or an oddly shaped blood clot somehow attached to the wall, or “vegetative” matter, the result of infection. Whatever it was, there was no way to remove it. Dr. Brown was concerned it could break off and disappear into her blood stream.

Three days later, it did exactly that.

That morning Aurora began screaming in pain and holding up her right rear leg. Her foot was cold to the touch. We called Dr. Goossens to alert her, then rushed Aurora back to the clinic, where Dr. Brown was waiting.

Sure enough, a new echo showed the object was gone from her heart. A few minutes later the radiologist, Dr. Lynn Walker, used her ultrasound to find it lodged in an artery of Aurora’s right leg.

Subsequent tests found no source of infection in her bloodstream but did find her blood was prone to clotting, caused by underlying kidney disease. This confirmed it had been a clot and not something else. It also gave us a possible clue to her neck pain — she may have been throwing smaller clots that had traveled upstream.

Aurora is now on multiple medications to reduce her clotting risk, including three daily heparin injections. Dr. Goossens regularly tests her clotting profiles. Fortunately, Aurora can use that leg again and is not in any pain today. In fact, you?d never know what she’s been through. She’s back to her active, inquisitive little self. That is, when she’s not sacked out like this: 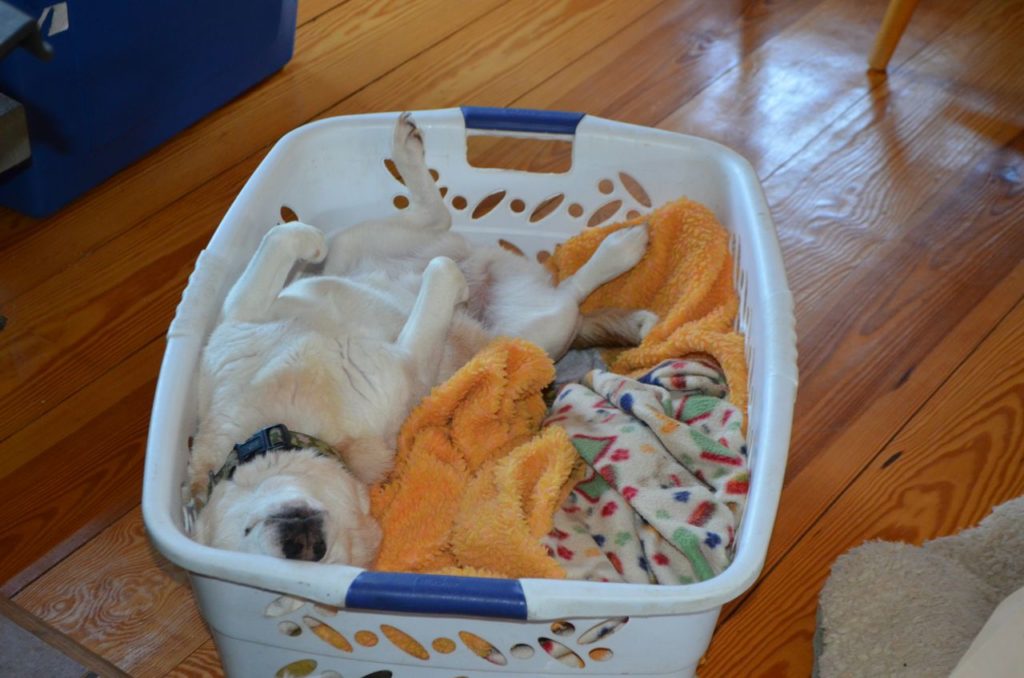