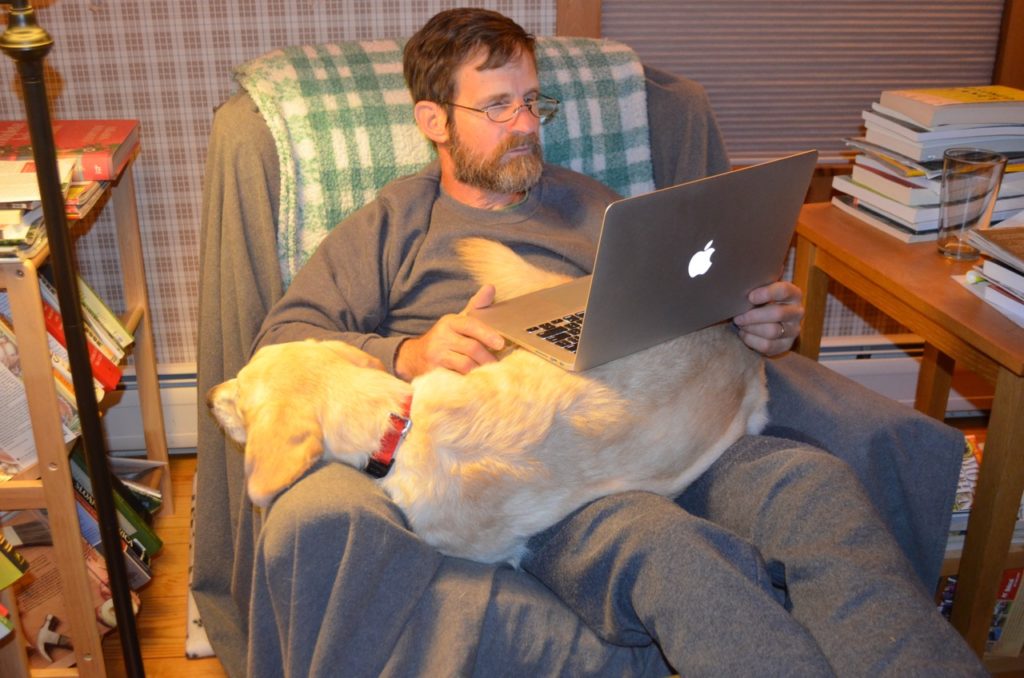 Well, I guess I need to begin with the not-so-heartwarming news: Millie’s eye surgery failed and she is blind again. The pressure in her eye dropped too low and the retina started to detach. The previous weekend we had started to see a pretty significant increase in her visual ability, but as I continued to test her eye pressure with our Tono-Pen that weekend, I noticed the pressures kept dropping, and continued dropping into Monday. Millie was on a pressure-lowering eye medication every other day, with the next dose scheduled for Monday night.

So I called our veterinary ophthalmologist, Dr. Sarah Hoy,’that morning, told her I was concerned about the pressure readings and wondered whether we should stop the medication. She agreed that we should hold off and see if the pressure rebounded. On Tuesday, though, we noticed Millie was having difficulty getting around, sometimes walking right into things, other times acting as if she could see. This continued Wednesday. This was a dramatic drop-off in her visual ability from what we’d seen just a few?days before.

At Millie’s re-check appointment on Thursday with Dr. Hoy, I said it seemed like 50% of the time Millie could see, the other 50% of the time she couldn’t. The reason, we learned, was because the upper part of her retina had detached. This meant that’things lower to the ground she couldn’t see (because they would get reflected to the upper part of the retina, which was no longer working), while objects higher up she could still detect with the lower part of her retina (yes, it’s kind of reversed).

Since Thursday, however, I think more of the retina has detached because it?doesn’t seem like she can see hardly anything — she’s walking into walls, doors and gates — large objects she could notice before.

Dr. Hoy has a call in to a veterinary ophthalmologist in New York who does retinal re-attachment surgery — one of only seven in the country who does this very complicated, lengthy procedure. Dr. Hoy wants to get his view on whether Millie would even be a candidate for surgery, given the pressure issues, her diabetes, etc. We’re not sure what we’re going to do at this point.

Now for’the heartwarming side of things: Alayne took that photo above on Saturday evening. I had settled into my usual chair for after-dinner reading, and normally I am surrounded by my minions — Darla in one chair to my right, Tanner in the other, and Millie on a bed at my feet. Usually Millie will walk up, touch me with her nose to confirm I’m present and accounted for, then settle down on the bed.

Not this time. She decided to climb right into my lap. Now, this too is not unusual in itself — she often will climb right up, give me a few licks, turn around a couple of times on top of me, then climb down. But for some reason this time she decided to settle down on my lap instead — and went to sleep!

I kept thinking any minute she would?get up and go back to her bed on the floor … but she didn’t. So I pulled the laptop over from the side table, perched it on Millie’s back, and continued reading. She slept like this for the next hour, even dreaming as she did. Nothing woke her up — not me talking with Alayne, nor Alayne grinding coffee in the kitchen. Finally, just before 9 p.m., she woke up, stirred, and decided to climb down.

Even though the eye surgery didn’t work, this is what we focus on: She is still one of the happiest and most loving dogs we’ve ever known. It hasn’t affected her one bit. She still rolls around her back to get a tummy rub, barks at me when she thinks it’s time to eat, and?loves to jump up, throw her front paws on my lap, and shower me with kisses. And yes, climb on top of me. I just don’t know about the sleeping on me part!