You are here: Home / Animals / Just One 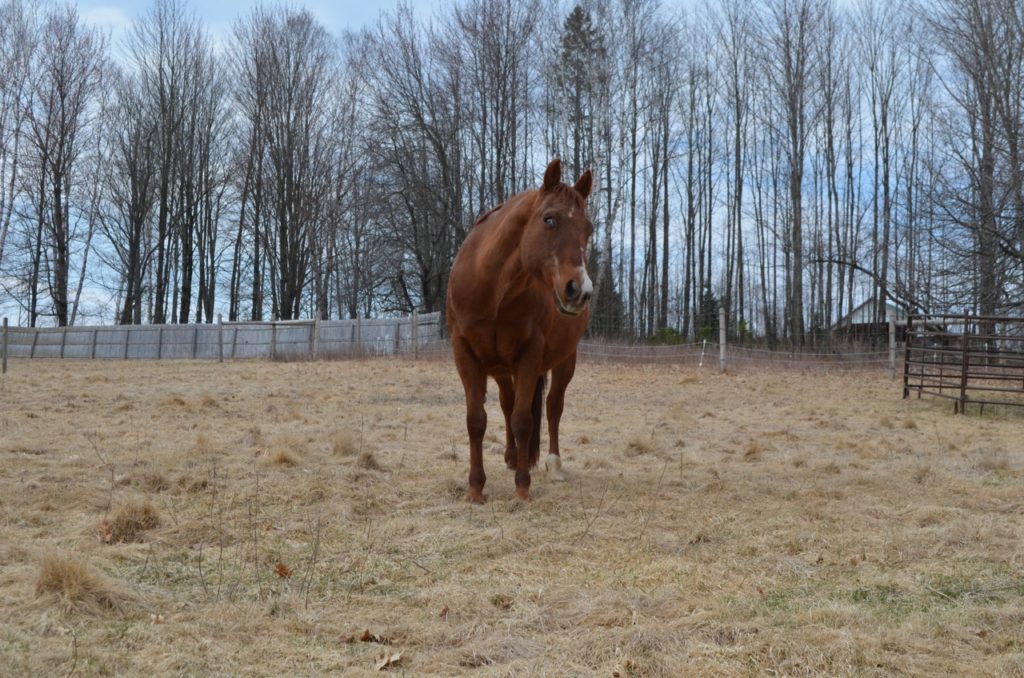 I took that photo of our blind mare Lena this morning. She’s enjoying being turned out much more often than usual this time of year because we had so little snow over the winter. Lena was the very first disabled animal we ever took in — not only’the first horse, but the first animal. We had just moved to the ranch in Montana in the fall of 2000 and started the nonprofit, and while our initial plan had been to take in disabled dogs and cats, the arrival of the first blind horse led us down this?additional path. Yesterday was her 24th birthday!

She?is now, all these years later, also the last of our blind horses.

For the past few years we were down to just two horses, Cash and Lena. Sadly, we had to euthanize Cash over the Christmas holidays. Longtime blog readers may remember that we had taken him in as a blind foal way back in 2007, ended up training him for riding before we left Montana, and brought him with us to New Hampshire in 2010. (Incidentally, we haven’t taken in any horses since 2007.) But in the last?year?Cash had become increasingly difficult. We had long since separated Cash and Lena into different?corrals and pastures because he would pick on her and bully her, even though she had raised him since he arrived as a tiny foal.

But his behavior grew more troublesome, with unpredictable outbursts that made him unreliable and hard to handle at times. Last spring, he “blew up”?on us when our equine vet was here for spring vaccinations and health exams. A few months later, he exploded during a routine farrier visit. Fortunately he didn’t injure our farrier, but Cash’s?behavior left him?rattled and us no longer able to trust Cash. He was increasingly wound-up and anxious, kicking out, whirling, seemingly in constant motion. It became a challenge some days to walk him out to pasture, since we didn’t know how he was going to behave. We noticed that his anxious energy and antics were having an effect on Lena in the corral next door. She seemed nervous and uptight, which was?completely unlike her.

The final straw came, ironically, on Christmas Day. We had an unusually warm and dry Christmas period, with?no snow on the ground, so we had been taking Cash and Lena out to?pasture on those beautiful days. ?I walked out to get Cash but he wouldn’t let me get him (this had been a recent development for him), so I?brought Lena?in first. I went back for Cash. At first he still wouldn’t let me catch him, but eventually I was able to walk up and stand next to him, ready to slide the halter over his head.

Without warning, he shot up in the air, coming straight at me, front hooves out and flailing. I spun around and dove out of his way, and he just missed going right over me. I rolled away across the ground and underneath the fence. It was the closest call I’d ever had with a horse. Like our farrier had been, I was shaken but unhurt.

I decided to give Cash some time to settle down, so I just kept talking to him, trying to coax him back to me, letting him know everything was alright. Cash was clearly agitated, but why I couldn’t tell. I walked away for a while, came back, and tried again. We went through the same pattern as before — he wouldn’t let me catch him, running around in circles, then eventually he calmed down, walked over to the fence, and stood there. I quietly walked up, talking to him as I went.

Finally, standing next to him, I was just about to reach out with the halter when he exploded again, almost going right on top of?me. I fell over, hit the ground, but wasn’t trampled. I couldn’t believe it had just happened again.

I thought about just leaving him out on pasture, but we had wintry weather (finally) coming in that evening. Worse, Cash would be too freaked out if we left him out on pasture by himself all night. He would end up taking out the fences and injuring himself in the process. Alayne was in the house while all this was going on, but I wasn’t about to ask her to try to get him.

So I gave Cash some more time, and tried once again. I was, by this point, scared to death of this horse and what he might do. For whatever reason, this time he let me halter him without incident, though I could feel his manic, pent-up energy almost bursting through his skin. Nervous that he would erupt on me at any moment and holding the halter rope at arm’s length away from me, I carefully walked him down the hill and back to his shed. It was with an enormous sigh of relief that I finally took his halter off and turned him loose in his corral.

I went into the house. Alayne took one look at me and said, “What happened? Are you okay?” I was white as a sheet, she said, looking like I’d just seen a ghost. I told her what had occurred with Cash?and how close I had come to serious injury. ?I said we had come to the end of the line with Cash. She agreed. We realized it had been a long time since either one of us had been?comfortable handling him.

The following Monday, I called our equine vet to schedule his euthanasia.

When she arrived, we discussed our previous conversations with her about Cash and his behavior, and she clearly remembered his blow-up the previous spring. Now, watching him circling and wound-up?in his corral, she decided for her own safety and ours to?use a four-foot-long pole-syringe to inject him through the fence with a sedative. Once sedated, I slipped a halter on him and walked him out to the grave site our contractor had dug for us earlier that day.

The reason this was particularly upsetting for us is because we had to acknowledge’that of the four horses we had?who were born blind, we ended up euthanizing three of them for behavior problems. That’s right. First Destiny back in Montana, then Nikki a few years ago here in New Hampshire, and finally Cash. (The fourth one, Brynn, had been born with multiple physical?problems besides blindness — a hole in her heart, one kidney, and an ectopic ureter. We euthanized her for medical reasons.) These horses were from completely different lines, came to us from different parts of the country, and the only thing they had in common was the fact that they were born without vision.

We had a very experienced vet in Montana who used to tell us that “disabilities like company,” meaning that if an animal is born with a disability, the chances are good that there may be another medical problem that could develop, or become apparent, later. In other words,?if a fundamental sense like vision is compromised during fetal development, there could well be other “wiring” that doesn’t get put together properly, too. Why would vision be the only thing that goes wrong, for instance? We had a case of a born-blind puppy in Montana who we adopted out to a wonderful lady we knew well, and about a year later, the dog developed mental health problems that created bizarre and potentially dangerous behavior that led to her euthanasia. We wondered then about this possible link. On the other hand, we’ve had many born-blind dogs over the years who never developed any other issues. They went on to live long, happy, wonderful lives.

We’ll never know for sure what might have been at work when it came to these horses. All we have is our experience, and it’s disconcerting to say the least.

Lena, meanwhile, is back to her usual calm?and?quiet self. Typically?horses are not happy to be without other equine company, but in Lena’s case, she seems perfectly content. Her own demeanor has noticeably improved’since Cash left. She’s herself again. When I went out this morning to take her photo, she was down in one corner of the pasture along a fence. I walked up next to her, slid my right arm underneath her jaw and brought my hand up alongside her right cheek, and walked her out across to the center of the pasture where I wanted to take her photo. In other words, I was using my arm as the “halter.” That’s the kind of horse she’d always been, but I couldn’t do that with in the past year or so. Now she’s as mellow as she used to be. And she sure doesn’t mind being pampered and doted on.

As she likes to remind us when we’re late with her morning grain, “Don’t forget who’s No. 1!”