You are here: Home / Dogs / Jasper and Girls 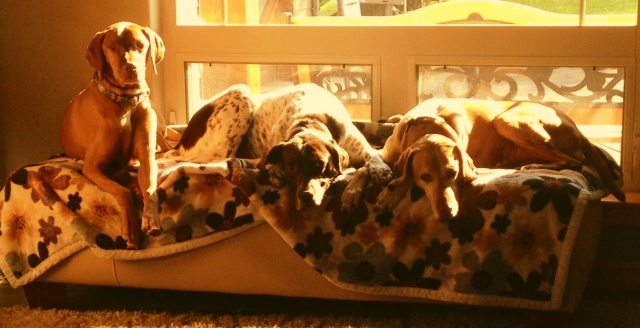 Well, this was a trip down memory lane! We recently received an email and these photos from Laurie B. in Bozeman, Montana, who adopted a German Shorthaired Pointer named Jasper from us way back in 2006. Jasper had come to us in 2002 with a crippled front leg. He had sustained an elbow injury that was never treated, but the real problem as a result of the injury was a contracted biceps tendon. It left his leg permanently pulled up.

Our veterinary surgeons in Spokane tried a surgical procedure to release the tendon, but it only worked momentarily, and pretty soon the leg pulled back up. He could flex the leg but not really use it, so we considered him a three-legged dog — and yet he was the fastest dog we’d ever had. He was not in any pain so the surgeons decided to leave well enough alone at that point.

Laurie and her husband already had two beautiful, high-energy Viszla girls and wanted to bring Jasper into the family. As you can see, all these many years later, Jasper is still doing great, and still enjoying the company of his lovely girlfriends! After adopting Jasper, periodically Laurie would send updates, like this one from 2009.

In this latest update, Laurie wrote: “Realized it’s been a long time since we checked in from Bozeman, MT and thought to send you pics of ‘the life o’ Jasper’. He’s just the sweetest boy ever and we adore him!” Here’s another shot of Jasper and girls hard at work: 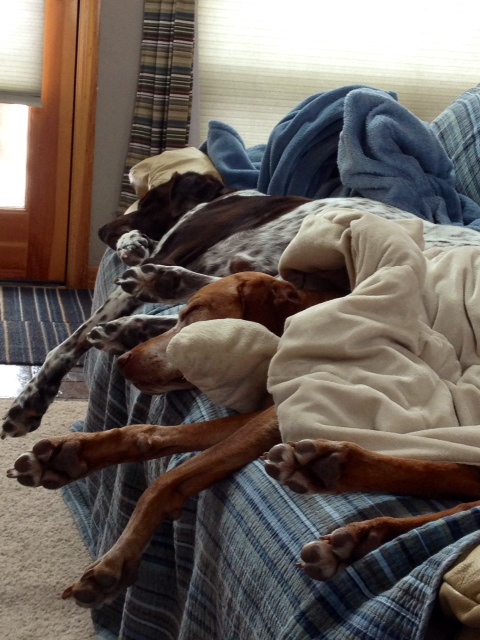