You are here: Home / Uncategorized / Introducing … Buddy and Chance! 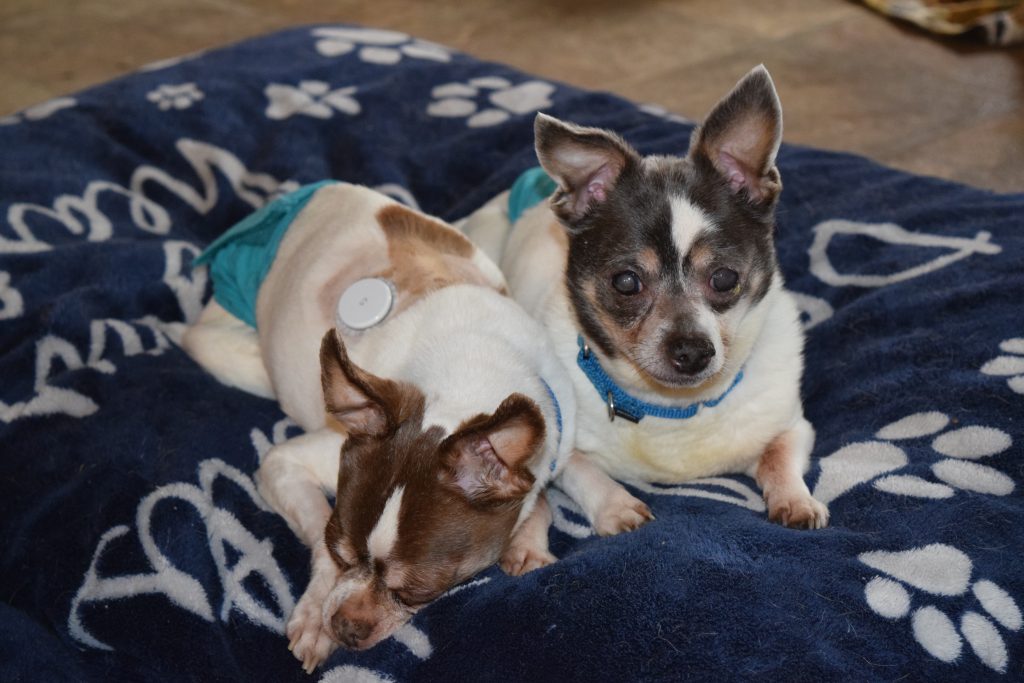 These two sweet boys arrived three weeks ago from a New Jersey rescue group that had asked if we could take them. That’s Chance on the left and his pal Buddy. They are 15 and 14 years old, respectively. They had belonged to an elderly person who was no longer able to care for them, and ended up at the rescue group.

Chance is blind and diabetic (we now have four diabetic dogs at the moment!).  After taking them to see our veterinary specialists in Burlington, we also learned Chance has Cushing’s disease, which is one reason his diabetes is so poorly regulated.

In the photo you can see the white disk on his side — that’s the continuous glucose monitor, a FreeStyle Libre sensor, that we use to check his glucose levels throughout the day. Working with our internist at Peak, we have already made two insulin changes since he arrived, but still don’t have him well regulated. When we got the Cushing’s results last week, our internist noted that could be one reason why, because Cushing’s can interfere with the body’s sensitivity to insulin. His specially compounded medication to treat his Cushing’s is arriving today from the compounding pharmacy in New Jersey.

Buddy came with two eye meds for his left eye, which had been diagnosed as classic dry eye, or KCS, by the rescue group’s veterinarian. (You can see some crustiness on the edge of his eye in the photo.) Both of those eye meds — cyclosporine and tacrolimus — are indeed used to treat dry eye, but we had noticed during his first week here that they didn’t seem to make that much of a difference. When we took Buddy to our ophthalmologist at Peak, we learned that Buddy actually has a condition known as neurogenic dry eye, which results from nerve damage that can affect the entire side of his face. This is why the other two meds weren’t very effective.

As our ophthalmologist explained in her written diagnosis, “Neurogenic KCS is caused by loss of parasympathetic innervation to the lacrimal gland and is less common than immune-mediated KCS. Because the parasympathetic branch of the facial nerve innervates the lateral nasal glands, dogs with neurogenic KCS may also present with dryness and crusting of the ipsilateral (same side) nares (nostril).” There is one of these nerves for each side of the face.

You may not be able to tell from the photo, but the left side of his nose was also dry and crusty when he came. We hadn’t put two and two together because we had never heard of this before.

The treatment is actually kind of odd: We’re giving him a topical eye drop called pilocarpine, but we give it to him in his food twice a day at gradually increasing dosages until we see evidence it’s working. This medication is intended to stimulate the parasympathetic nerve. We’re still in the process of increasing his dose of pilocarpine and aren’t there yet, but it should be soon.

The other thing you’ll notice in the photo is the diapers they’re both wearing. Ah, yes. The boys are not incontinent, nor do they have urinary tract infections (we did urine tests at Peak), and yes, they are neutered. They just like to lift their legs on every object in the house, from bedding to furniture to doors. We’ve been taking in dogs for over 20 years and have never seen a dog who likes to mark as much as these two. We were not made aware of this when we were asked to take them, so it is just something we are having to deal with. They were probably “trained” by their original owner to use pee pads in the house, and it evolved into this. We’ve seen Chance, even wearing diapers, lift his leg and try to pee on things.

Here’s another view of these two tykes. I took this photo soon after they arrived, when we only had a couple of diapers on hand and some pee pads to use as absorbent material. Since then we’ve ordered a case of diapers and cloth pee pads designed to fit inside the diaper. 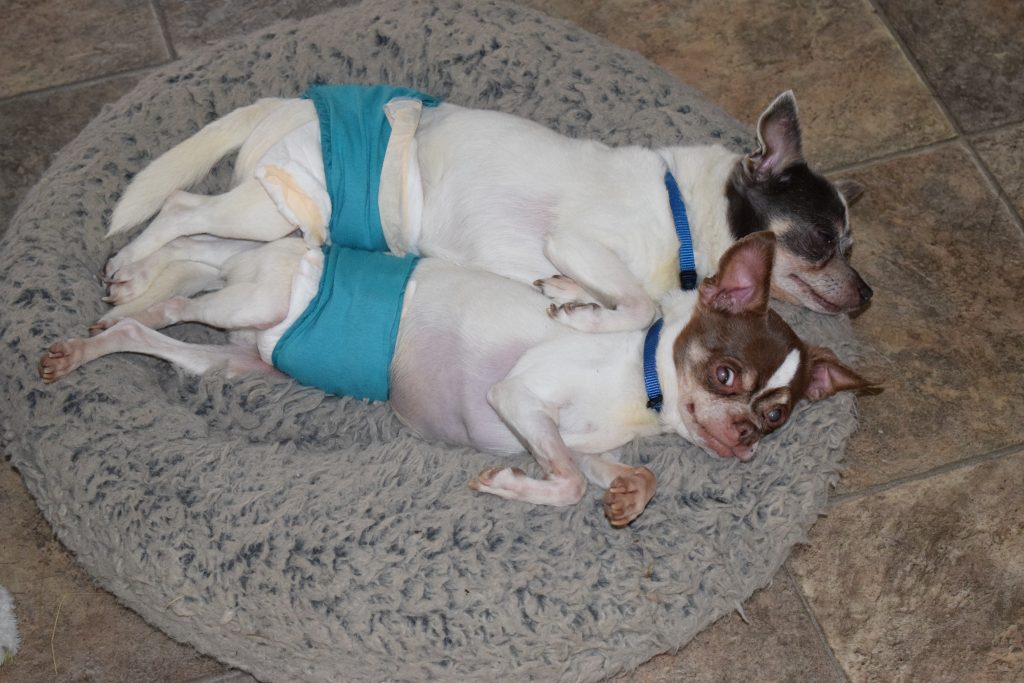 Despite their challenges, we’re delighted to have them and are going to do everything we can to make sure their final years are as happy and as healthy as possible.