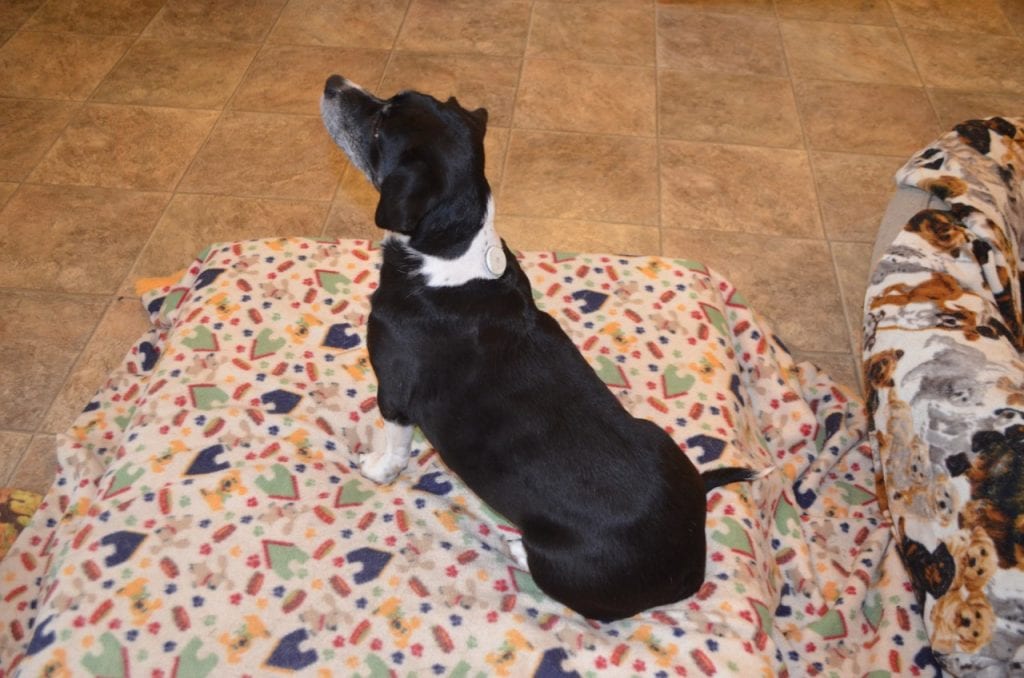 A bit of background first!

As I think many of you may know, we currently have three diabetic dogs here — blind Millie the Lab, Daisy the Dachshund/Boston Terrier mix (pictured above), and our recent arrival, Allie. Both Daisy and Allie came to us blind, but our veterinary ophthalmologist was able to restore their vision with cataract surgery. We lost our other diabetic, Sophie the blind Dachshund, last year to complications from cancer. We’ve had other diabetic dogs in the past, too, so we’re very familiar with the challenges of managing diabetes.

One thing that has always been a problem is being able to get blood from them to run through a regular glucose meter.  All you need is a drop or two, but some reason, many of our diabetic dogs over the years just did not want to give up that precious drop of blood.  We’d prick them with the needle in the ears (the usual place, which should bleed easily but rarely seems to), paw pads, etc., but too often that spot would fail to bleed sufficiently.  So then you end up trying other sites, poking again, and striking out.  We’d give up because we didn’t want to cause them undue distress with repeated pricking.  I could prick myself with the needle and instantly get all the blood I might need for a glucose test, yet for dogs, it isn’t always that easy.

So the traditional best way to see how well a dog’s diabetes is regulated is to have your vet clinic do a 24-hour glucose curve.  Your dog is hospitalized for this period, and the vet inserts an IV catheter and uses that to pull blood on a regular recurring basis for the glucose tests.  The results tell the vet whether to adjust the insulin dose.  Of course, that’s still just a one-day snapshot, and because of the hospitalization, it can get expensive.

There is another lab test called fructosamine, which measures the average glucose level over the past few weeks.  We do this routinely because it can give our veterinarians a better idea of longer-term control than the 24-hour glucose curve.  The fructosamine test our Idexx lab uses grades the control levels as Good, Fair, and Poor.

Which brings us back to Daisy.  Despite looking and acting like her diabetes is under control — normal eating and drinking, normal urination, great energy, stable weight — her fructosamine scores have been registering as “poor”.  Yet without knowing how high her glucose might go, or worse, how low it might get, during that time, it’s a bit difficult to know exactly how much to adjust the insulin.  If we see a lot of high glucose levels, the natural tendency would be to increase the insulin, but if her glucose also drops very low at certain points during the day, an increase in insulin might tip her into a hypoglycemic event during that low point in the cycle.  (And then there’s the Somogyi effect.)

After the last (and disappointing) fructosamine test on Daisy, our veterinary internal medicine specialist at Peak suggested we try a different kind of glucose measuring technology called a continuous or flash glucose monitor.  There are a couple of these on the market, and she ordered the FreeStyle Libre for Daisy.  It is designed for people, but some vets have been using it successfully in pets now.

This measures the glucose that is in the interstitial fluid just under our skin, rather than the glucose in the blood.  It’s a round patch that contains a sensor with a tiny needle that stays in the skin for up to 14 days.  That’s what you see on the back of Daisy’s neck in the photo.  It measures the interstitial glucose every 60 seconds, and there’s a small handheld scanner that wirelessly reads the data from the sensor.  Just hold the reader about 1.5 inches above the sensor, and you get the current reading.  It looks like this: 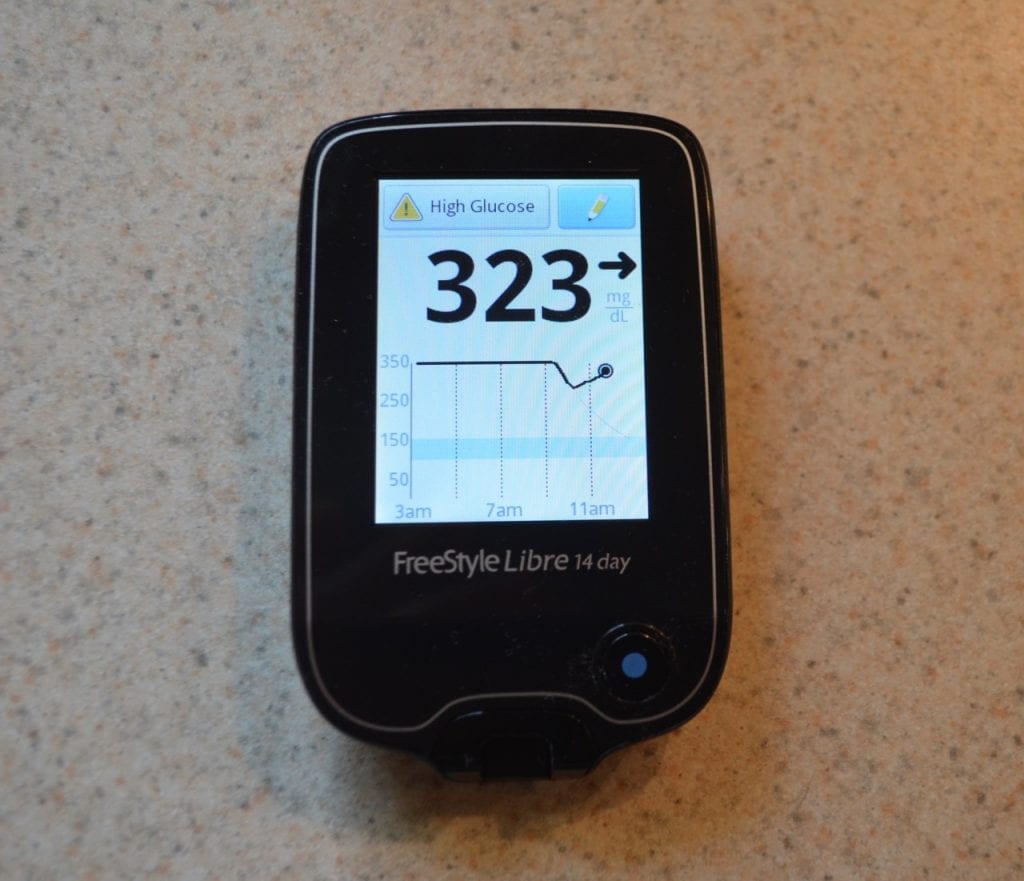 I took Daisy to Burlington a couple of weeks ago to have this done.  It was the first time Peak had actually used one in a pet, though the vet tech who applied it to Daisy had done a few at a previous veterinary clinic she had worked in.  The tech shaved the hair on a spot on Daisy’s right shoulder, applied a thin ring of tissue glue around the edge of the sensor to help secure it (the sensor has its own adhesive, but because we’re not applying it to bare human skin, more adhesive is better), then used the applicator to stick it onto Daisy.

We got several readings that afternoon and evening back at the farm, but unfortuately, by the next morning the sensor had detached from Daisy.  We had a spare sensor that we brought home from Peak, so I ordered medical tissue glue from Amazon as well as medical Tegaderm transparent film dressing to also help secure the sensor to Daisy.

Rather than attach the new sensor to her shoulder, I followed the method used in a study of the FreeStyle Libre on dogs that I had recently read in a  2016 issue of the Journal of Veterinary Internal Medicine that is open access and available to the public here (note the first page is an ad … scroll past it to get to the article).

The vets in the study attached the sensor to the back of the neck, and used a transparent film or tape (I couldn’t tell what exactly) along with a wrap-around bandage to help secure the sensor.

So last week Alayne and I set out to try again with Daisy.  We shaved an area on the back of her neck first.  Next we applied the tissue glue around the edge of the sensor, then used the applicator to attach it to her neck, and finally applied the medical film dressing over the top.  It quickly became apparent that the film was not going to hold to anything but the sensor, so we clipped the rest of it away.  We used vet wrap around her neck for the bandage, but eventually found that in time it tended to roll up at the edges and bunch up, so we had to keep an eye on it and change it quite frequently.  However, many days now we don’t even bother with the bandage at all.

We’re pleased to report that tomorrow (Tuesday) will be a week that Daisy has worn the sensor successfully.  Just the other day we noticed one edge of the sensor had started to detach, so we carefully applied a little more tissue glue (amazing stuff!) to that one area and it was secure again.  We’re going to leave the sensor on for a few more days (assuming it continues to stay on, that is), then hook the reader up to the computer, download the data, and email it to our internal medicine specialist for review.

What have we learned so far?  Daisy’s glucose levels are all over the map, occasionally veering into normal range (“Oh my goodness, look at that!”) to so high that the reader just says “HI” rather than giving us a number.  That means she is over 500 mg/dL at that point.  In other words, she is very poorly regulated, but at least now we have detailed daily patterns we can see over the course of a week so far.  What we can do about this will be up to the doctor.

These devices are so much easier to use than regular blood glucose monitors — no need to keep pricking for blood!  And honestly, it can get a little addicting, always wanting to know what Daisy’s glucose level is at any moment, and just being able to wave the reader over the sensor and get the reading instantly.

I never thought we’d manage to keep the sensor on Daisy this long — she’s very active, loves to run and jump, and especially loves to roll around on her back.  Thus we thought we might be lucky to keep this on her for a day or two at best, yet here we are, almost a week later.

Finally, here’s a link to a video on YouTube where a veterinarian is demonstrating how to apply it to a dog.  This was helpful to watch, but we were puzzled when he said you have to wait 12 hours after applying the sensor to get your first reading.  You don’t.  You wait 60 minutes after applying it so the sensor can calibrate itself, and then you can start getting readings.

In case you’re wondering, yes, we are going to use these devices next with Millie and Allie too!