You are here: Home / Farming / I’m Grappling With This 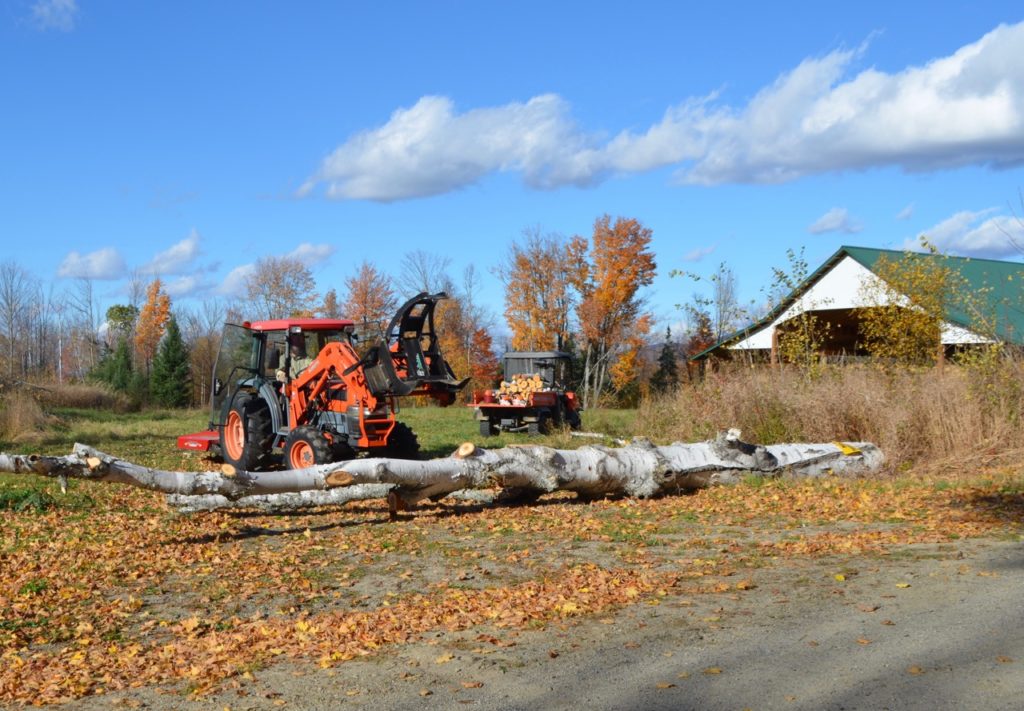 I don’t have any doggie news or photos to share (which is why no blog post last week), so I thought I’d offer up some photos from the farm side of things for a change of pace.

Alayne took these shots of me working on firewood on Friday. That thing on the front of the tractor is a grapple, which is a simple but awesome piece of equipment that saves my back and makes working on trees much safer. I can use it to lift an entire tree up off the ground, hold the tree at a comfortable height for chainsawing, then saw it?into rounds without ever having to muscle the tree around on the ground. Now, that big old birch you see there?is much bigger than normal firewood size trees, and the tractor can’t lift this one entirely off the ground, but it can still raise it up to make sawing much easier.

The birch was diseased, had been hit by lightning long ago, and had lots of dead limbs and branches. It was right on the road, across from power lines, and of course the weight of the limbs had it just wanting to come down across the road and onto the power lines … not back across the empty field by our hay barn, which would have been much more convenient. Even our professional logger friend, Craig, who takes down big trees for us and has recently taught me how to take down smaller trees, looked at it?and said, “Um, I think you’d better talk to the town about this one.”

The town of Lancaster sent their road agent?out to look at it, and he agreed it should come down to avoid it crashing across’the road during a storm. So a week ago the town road crew arrived and, using a large backhoe to push on the birch as they cut it — to ensure it fell onto our property and away from the road and power line — in a couple of minutes the tree was on the ground. It turned out to be a good call, because the tree was completely hollow at the base, with only about 6?inches of wood surrounding more than a foot of hollow interior. It wouldn’t have taken much to send this thing over in a windstorm.

I had told the town folks that if they knocked it down, I’d clean it up, de-limb it, and use the tree for firewood. So on Friday I set to work.

In this shot I’ve been working my way down the two big?upper branches while the grapple holds the tree up at just the right height for me:

The logs from the smaller branches I’ve cut up are already in the back of the utility vehicle behind the tractor.

In this next shot I’ve re-positioned the grapple farther down the tree trunk to keep it off the ground as I’ve moved down the tree sawing. At this point the tree was so large I had to switch to my larger Stihl chainsaw to make it easier to cut through. Alayne got this shot just as the round I had cut was falling off: 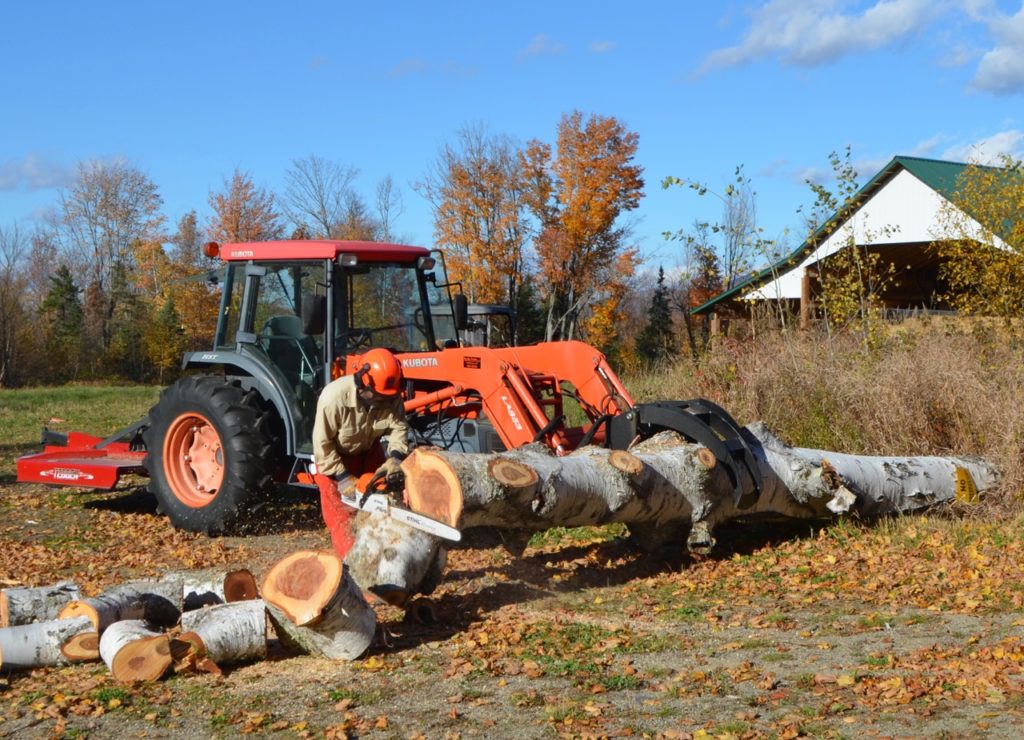 You can see how big the rounds are starting to get at this stage … weighing way over 100 pounds each, so I will later use the tractor bucket to pick them up and move them onto the wood splitter: 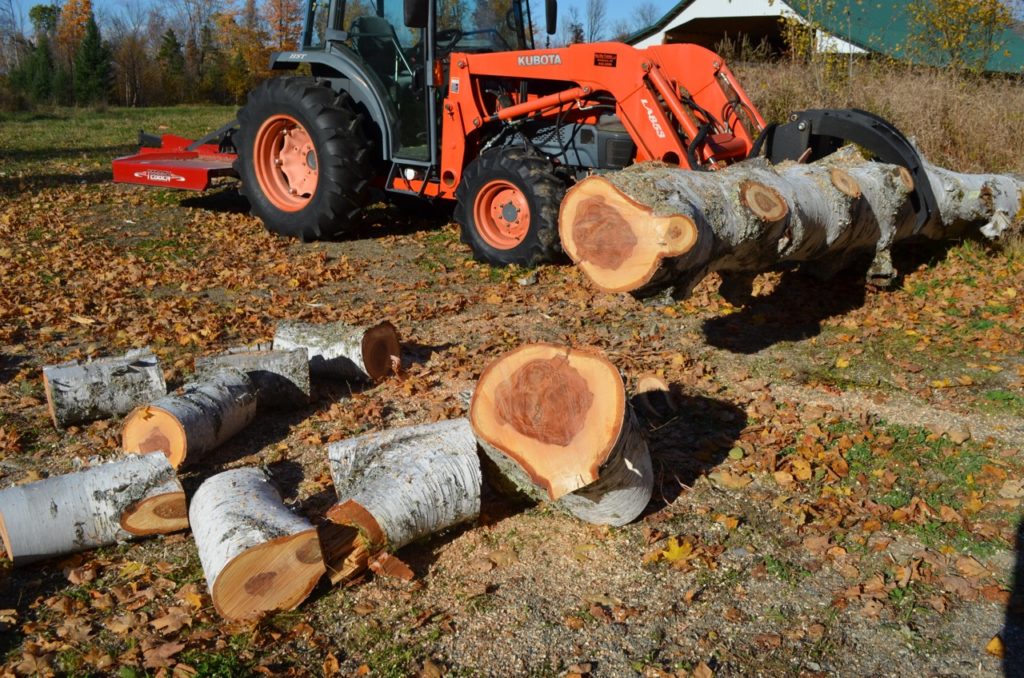 Meanwhile … until Alayne came up to take some photos of the grapple in action, she’d been harvesting carrots and took this photo: 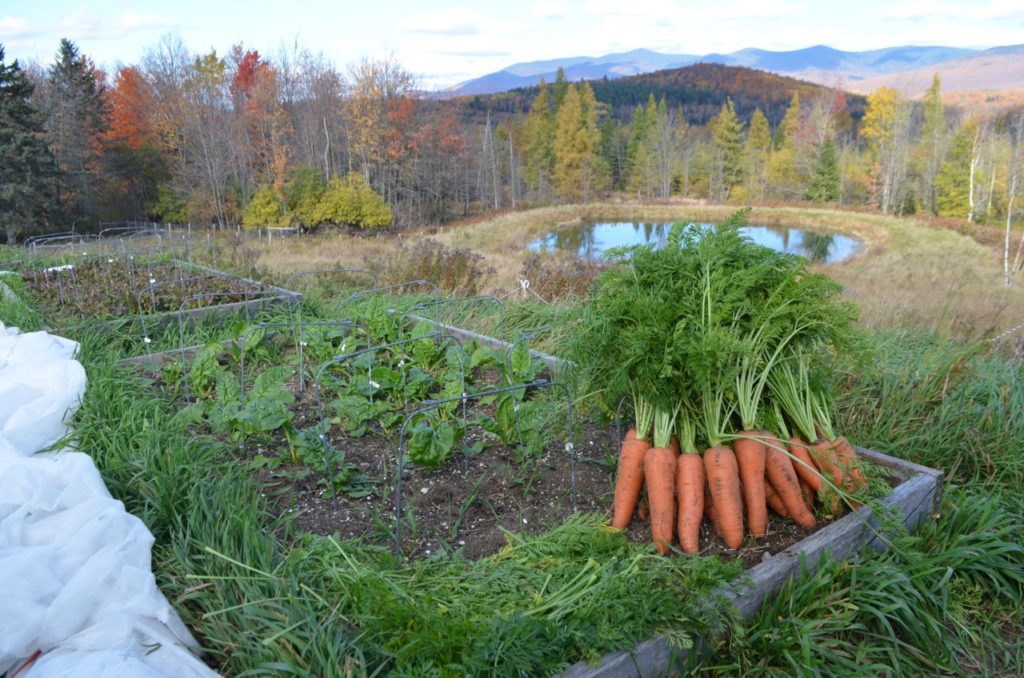 The two raised beds you see there with the hoops have a fall crop of lettuce (Bronze Arrow) in the back one and chard (Fordham, in the foreground). The carrot beds are outside the frame of the photo. We haven’t done fall greens outdoors before, so this was an experiment to see how far into fall we could keep greens growing in this climate. Even though I got them planted later than I should have, they have still done amazingly well. Having a warmer than usual autumn has certainly helped. The white fabric?you see bunched up there is the row covers we put over the hoops if we’re going to have freezing temperatures at night. The biggest test will come on Wednesday night, when we are forecast to be 21?.

As you can see from the carrots, Alayne’s got a bumper crop again — big and beautiful, crisp and sweet. Though so far we haven’t grown a carrot so large that we’ll need the grapple to handle it! 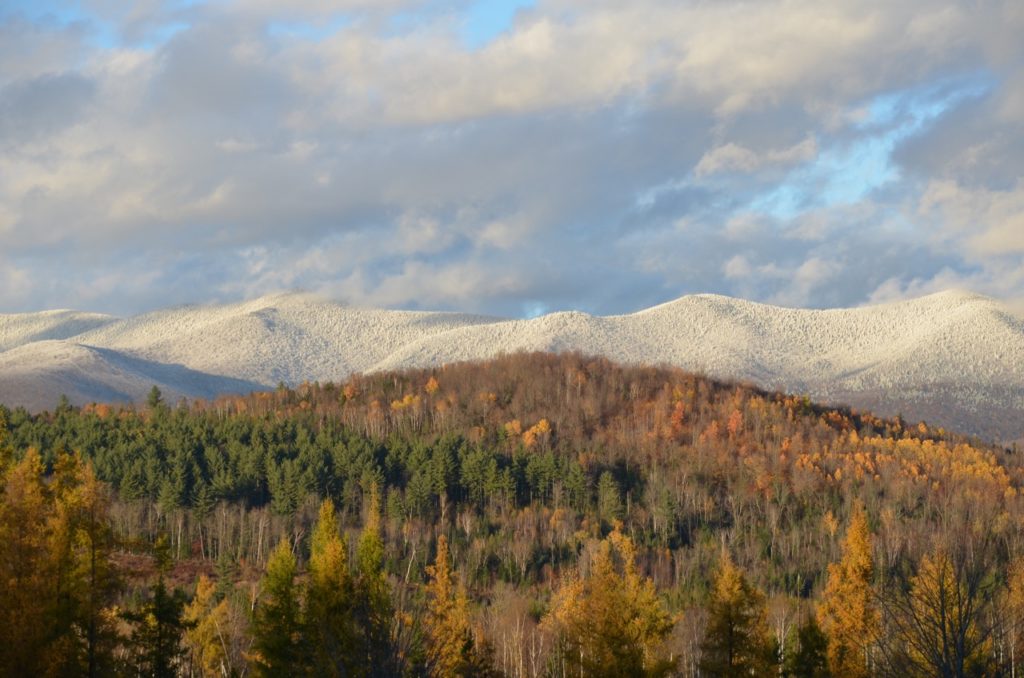 We woke up yesterday morning to a surprise snowfall — about an inch that lasted until mid-day. By the time I took that photo, the snowline had already crept back up the mountainside quite a bit. Today there’s still snow up there.