You are here: Home / Dogs / I’m Going To Have To Put My Foot Down 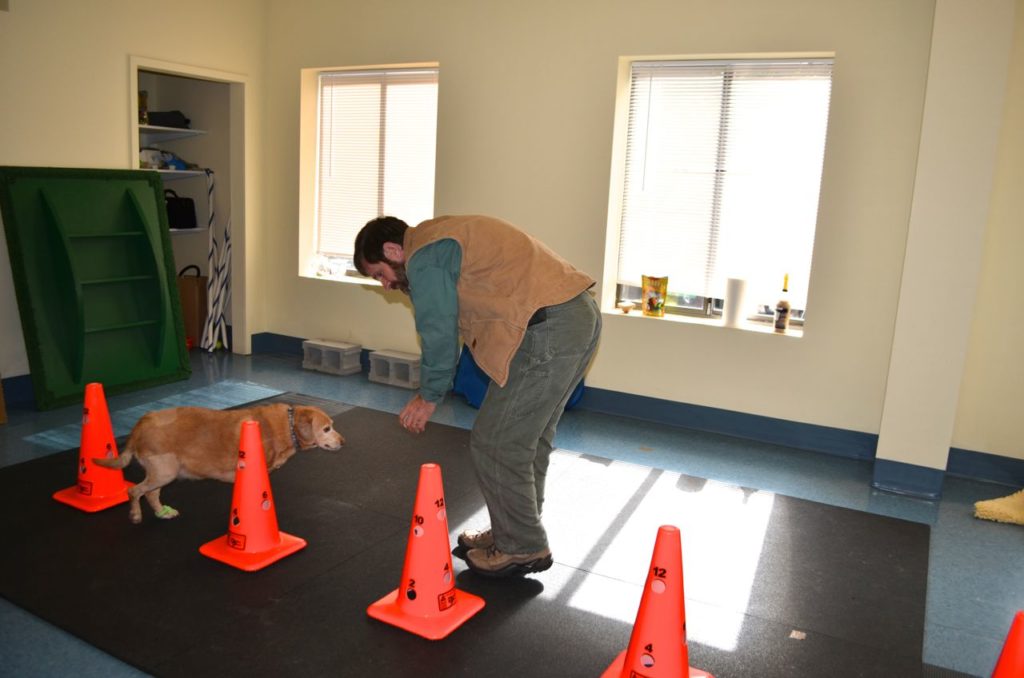 Darla is recovering just fine from her knee surgery of a few weeks ago, with one exception: She refuses to actually walk on her new, very expensive leg. She’s not in pain, and our veterinary surgeon at Peak, Dr. Kurt Schulz, examined Darla last week and confirmed all is well with her knee. This is a problem with … her head. You see, she can use that leg when she wants to scratch her chin, for example. That’s right, she can reach all the way forward with it, move it back and forth, apply pressure, and do just about anything she wants with it. Except walk on it.

According to Kurt, this is not uncommon, especially with smaller dogs who find they can quickly and easily adapt to being three-legged in the initial aftermath of blowing out the knee. Indeed, we were amazed at how fast Darla became adept at being three-legged — the very next day after sustaining her knee injury, she was moving around the yard at a clip that suggested she’d been three-legged for a long time. Larger dogs, like Aaron our Maremma, find it much more difficult to be three-legged, and prefer to start using the “new” leg as soon as they can. We had the opposite problem with Aaron, in fact; our challenge was to keep him from overdoing it.

After massaging Darla’s?leg here at home, pulling on it to get her to retract it so she’d have to use the leg muscles, and walking her up and down one of our sloping yards to wear her out so she’d want to use that leg, we found nothing we did really worked. It was time for professional help. Thus we had already scheduled an appointment to see’the physical therapist at Peak last week, Nancy Zimny, a?certified canine rehabilitation therapist. Following?Kurt’s examination of Darla to rule out any physical or medical causes for her reluctance to use the leg, Nancy took over.

Nancy was actually a?human physical therapist for most of her career, and was a?full-time Associate Professor of Physical Therapy in the Department of Rehabilitation and Movement Science at the University of Vermont for 27 years before retiring in 2008. Nancy told me that what we’re seeing with Darla is something she’s seen in human patients over the years, too. She spent about an hour showing me various techniques to use with Darla, from ways to massage her leg and back muscles to “tricks” to get her to put her foot down — like putting a plastic bag or a bell on the “good” leg, prompting her to want to lift up that leg with the disconcerting feel or sound and thus put the “new” leg down. We also did several exercises, as you see in these photos.

In the one at top, the goal is to get her to weave her way through the traffic cones, while wearing a hairband wrapped around the toes on the other foot. Again, a strange sensation that should help prompt her to give that foot a rest and put the other one down. The weaving through the cones is designed to make her turn on her back feet, increasing the likelihood she’ll end up using the foot she’s keeping in the air. I’m holding a cup with a little bit of peanut butter in it to motivate and reward her.

In this next shot Nancy is taking Darla over a very low “steeple chase” — it’s not easy to step over those poles on three feet, though Darla did her best to do so! 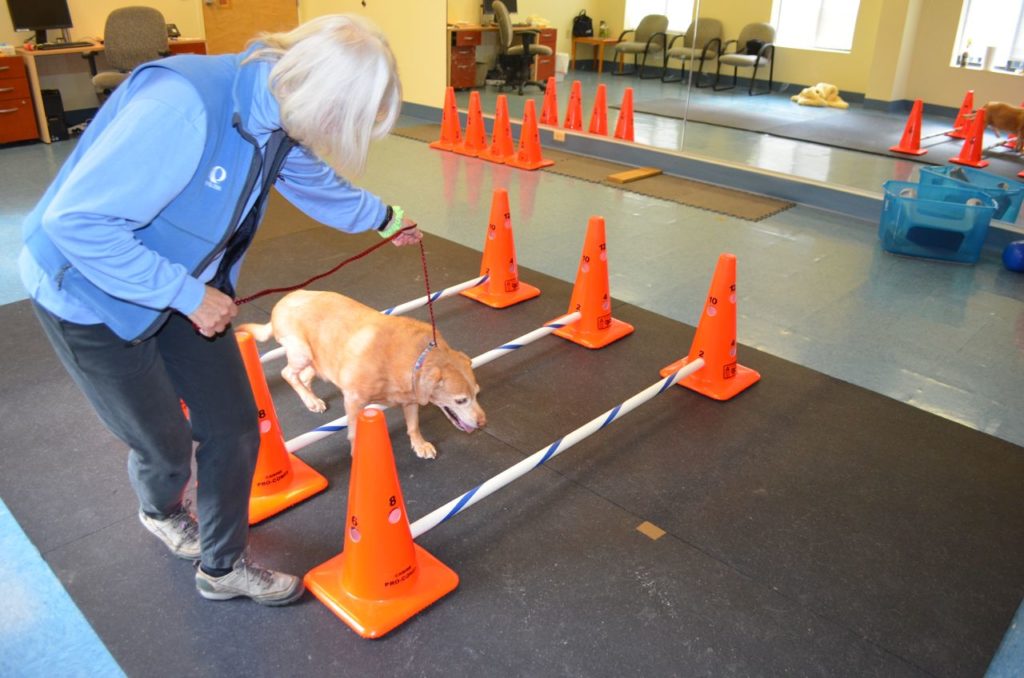 Nancy sent us home with a set of cones and poles so we could do these exercises here at the farm, plus two pages?of detailed instructions outlining the other exercises and techniques to use with Darla. We have another appointment in three weeks to check her progress. The reason we need to get Darla?using that leg is because eventually her muscles will start to atrophy from inactivity, and then it becomes a self-reinforcing problem.

The fall?round of the Shelter Challenge for 2014 is underway. It began October 13?and ends November 23. You can vote every day at?http://www.shelterchallenge.com/. To search for us, type in our name, Rolling Dog Farm, and Lancaster, NH 03584. We’ve won thousands of dollars in the previous contests, so your daily votes do bring in serious money for our disabled animals!