You are here: Home / Dogs / I Got My New Knee And I’m Going Home 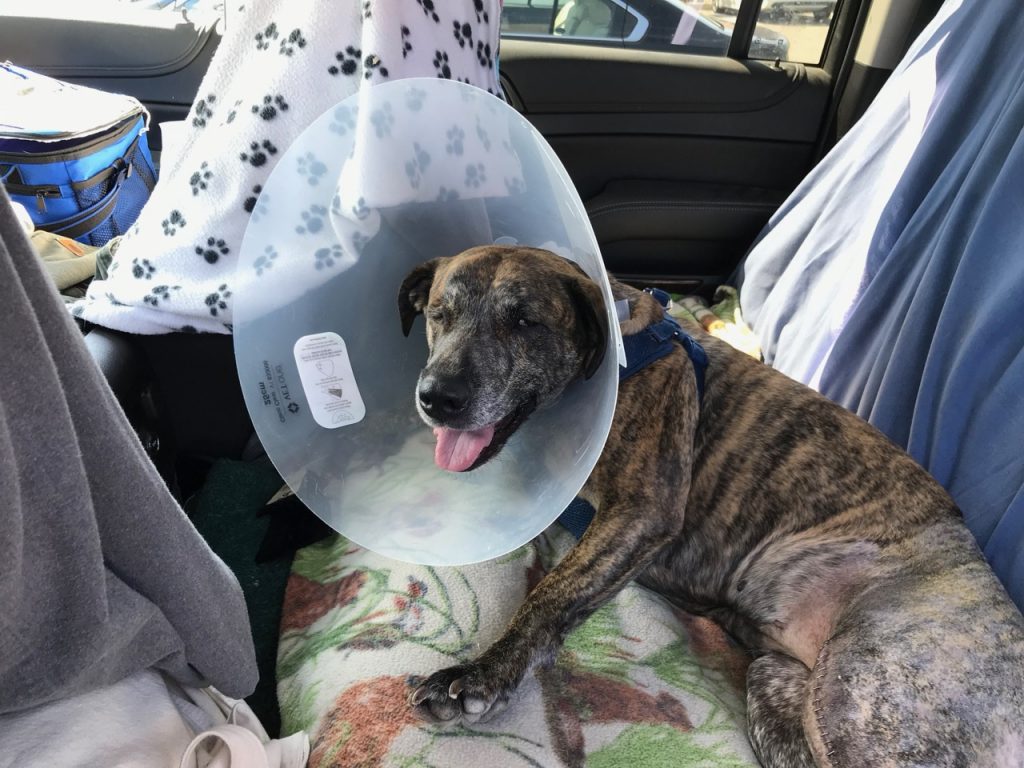 I took that photo on Friday afternoon when I picked up Cammie from Central Pet Hospital in Connecticut. That’s where she had a total knee replacement done a few days earlier by veterinary surgeon Dr. Melvyn Pond. You can see the staples running up and down her left knee. As always happens whenever Cammie ends up at a veterinary hospital, everyone there just fell in love with her during her stay.

You may remember from an earlier blog post that at some point in the past Cammie had been shot in her left knee with a .22 bullet. Our surgeon at BEVS in Burlington had removed it, along with 236 shotgun pellets Cammie had also been hit with. When Cammie came to us last December, she was using that left leg, and she continued to do so in the aftermath of the surgery at BEVS. But a few months later she just stopped using the leg altogether and began holding it up in the air. That’s when the BEVS surgeon recommended a total knee replacement for Cammie. This is a very complicated procedure done by only a handful of specially trained and certified veterinary surgeons in the country. Dr. Pond is one of those, and he also teaches the procedure at certifying seminars.

To see how it’s done, you can watch this 2-minute video by Biomedtrix (the manufacturer of the total knee replacement hardware) here.

Here are two X-rays taken just before her surgery last week showing the “before” knee: 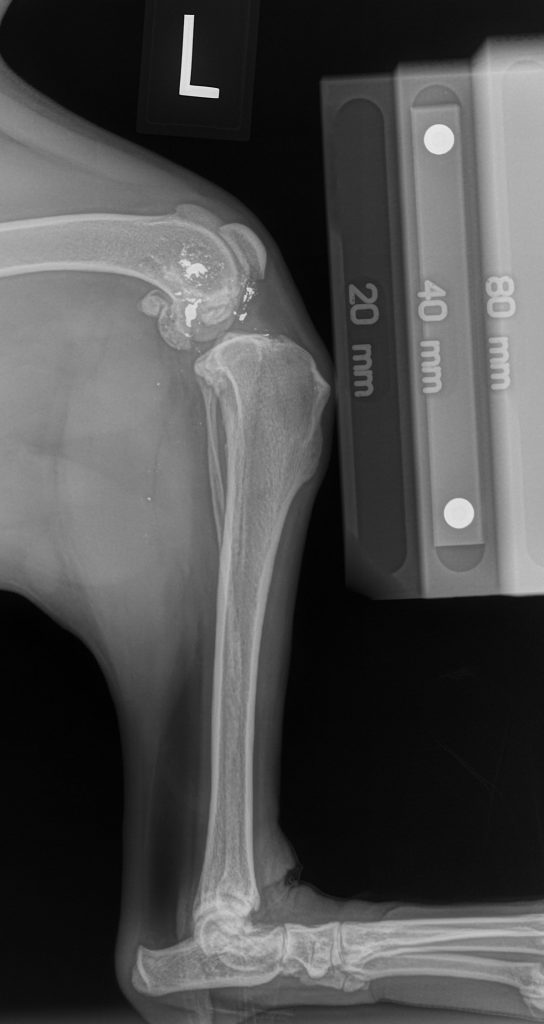 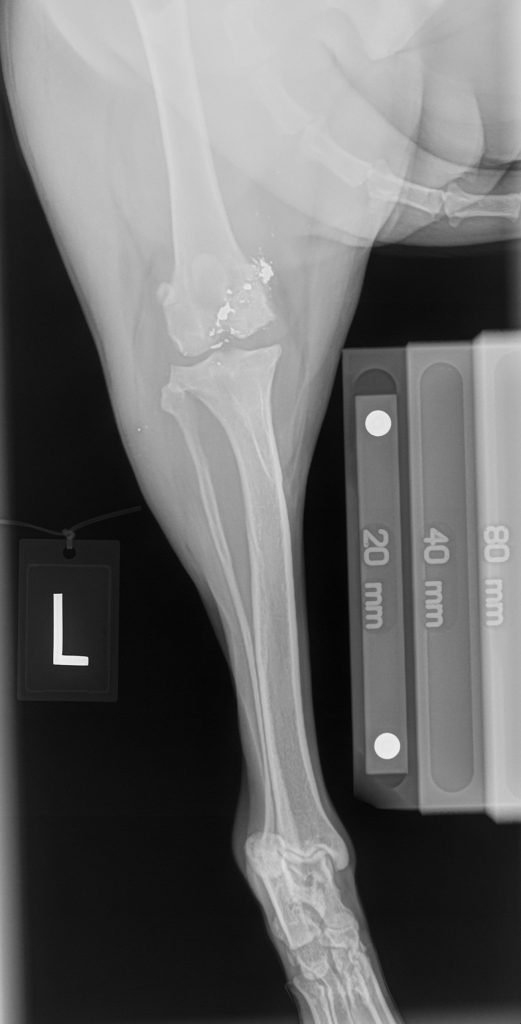 The bright spots are remaining fragments of the bullet that partially shattered on impact. It wasn’t possible to remove all of these at BEVS at the time because it would have caused more tissue and bone trauma and thus would have been been counter-productive. (That’s the same reason she still carries a lot of shotgun pellets.) Because Dr. Pond was going to be removing part of her knee bone anyway, he was able to get some more of these fragments out, but a few still remain.

Here are the post-op radiographs: 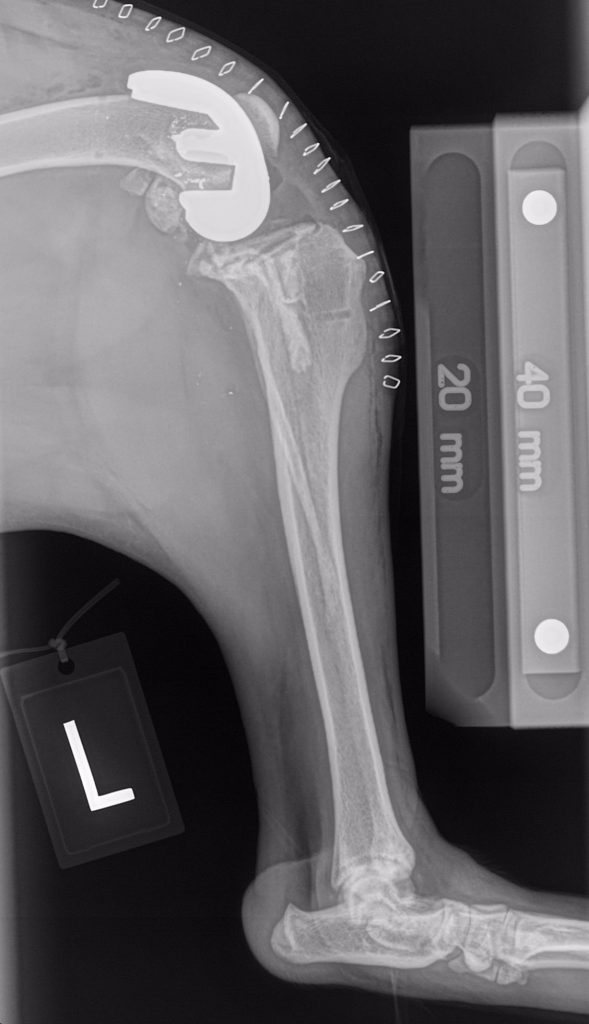 The other shiny objects are the suture staples.

And the next view: 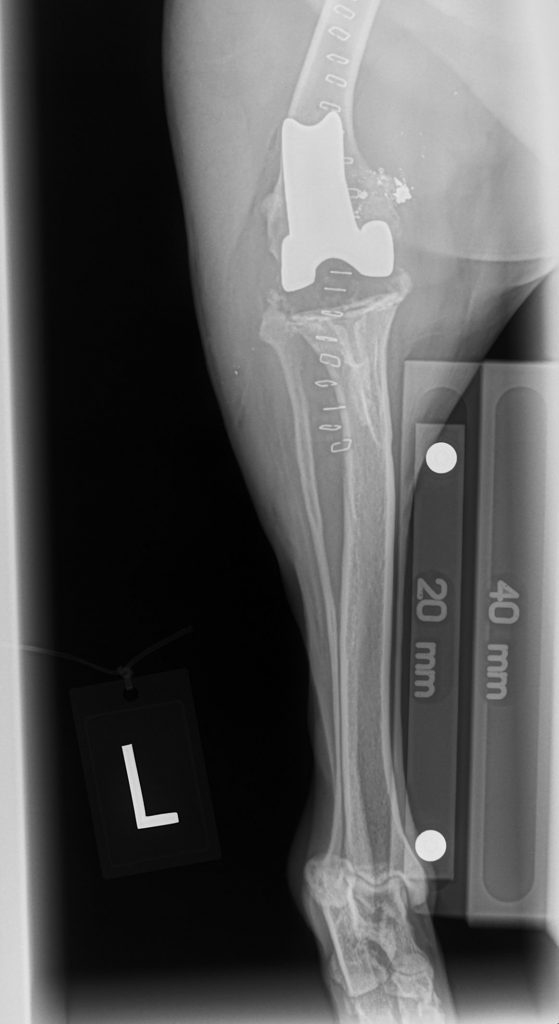 As part of the post-op recovery, Cammie will begin physical rehabilitation therapy at BEVS in a couple of weeks. In the meantime she is doing great at home, has a strong appetite, and is in terrific spirits. All in all, we’re really pleased with how she’s doing!

Meanwhile, in late June, I had taken Jake to another veterinary specialty hospital in Connecticut, MedVet in Norwalk, for two weeks of radiation treatment for his nasal tumor. Jake did very well during the course of the treatment, but about a week after returning home, he began to exhibit the side effects the radiation oncologist had warned us about — skin irritation around his nose and eyes, eventual loss of hair, and potentially a lack of appetite. Fortunately, he continued to eat and drink normally, but the skin on his face did begin to rupture and peel. This is what he looked like this weekend: 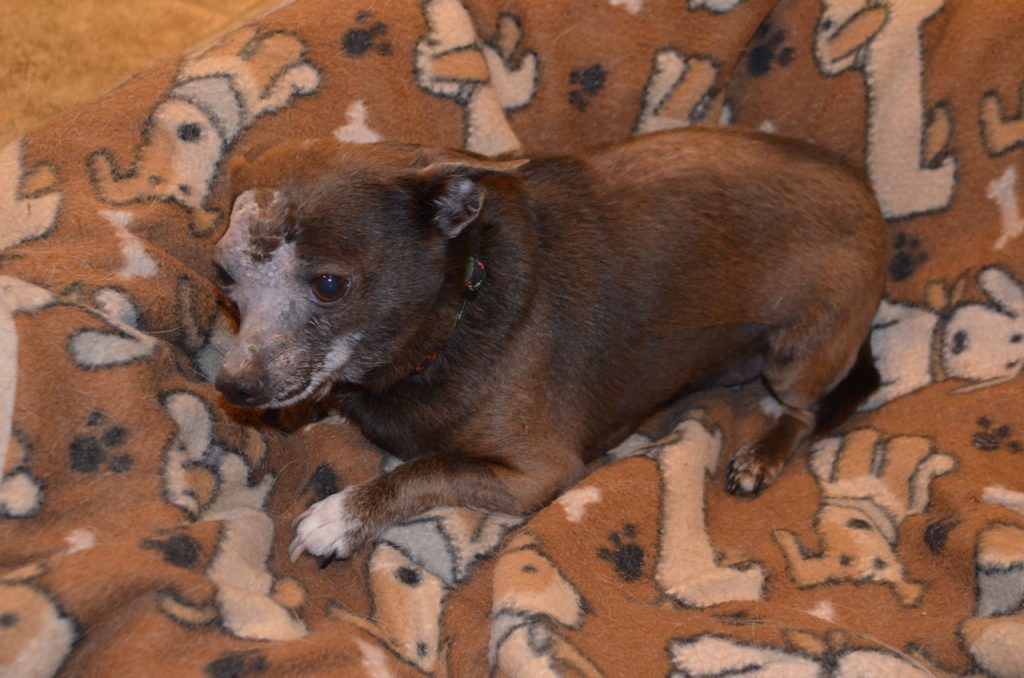 It looked a lot worse a couple of weeks ago, though it’s now getting better. Despite how he looks, Jake actually felt really good this whole time. Even while his face was a mess, he was active, energetic, and playful … in fact, more outgoing than we’d seen him in a long time.

The radiation could not eradicate the tumor entirely, but it did knock it back significantly and should give Jake — hopefully — another year of a happy, healthy life.

Meanwhile, in the midst of multiple trips to Connecticut, we managed to get a first cutting of hay put up. Despite having been in moderate drought for much of the spring, we had just enough rain at the right time in May to deliver a great crop of grass … in fact, our best ever. I think the most bales we’ve ever had from one cutting on this field was 180, and this time the baler knocked out 240 bales.

Here’s what the field looked like when I finished baling: 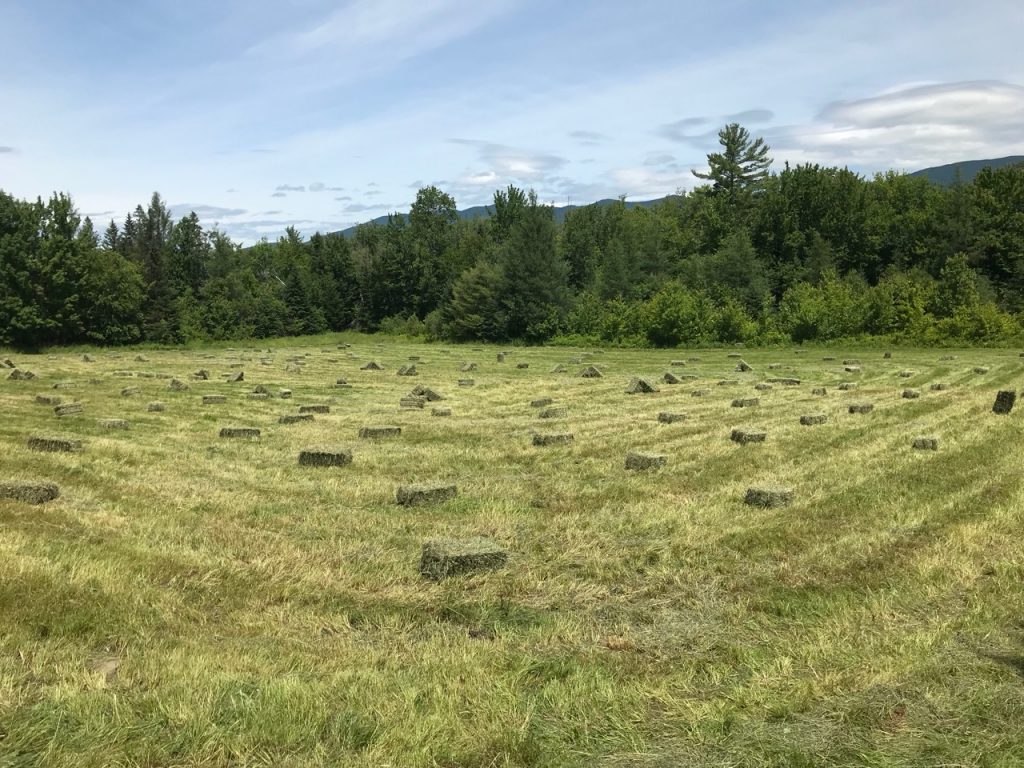 That was good news/bad news … good because of the high yield, bad because that meant even more bales to pick up, stack and unload!

My job after baling is to run around the field with the tractor, load the bales on the pallet forks, and bring them over to Alayne, who then stacks them on the hay trailer while I go get more.

Here’s Alayne taking a momentary break from stacking all those bales on that 24-foot long trailer: 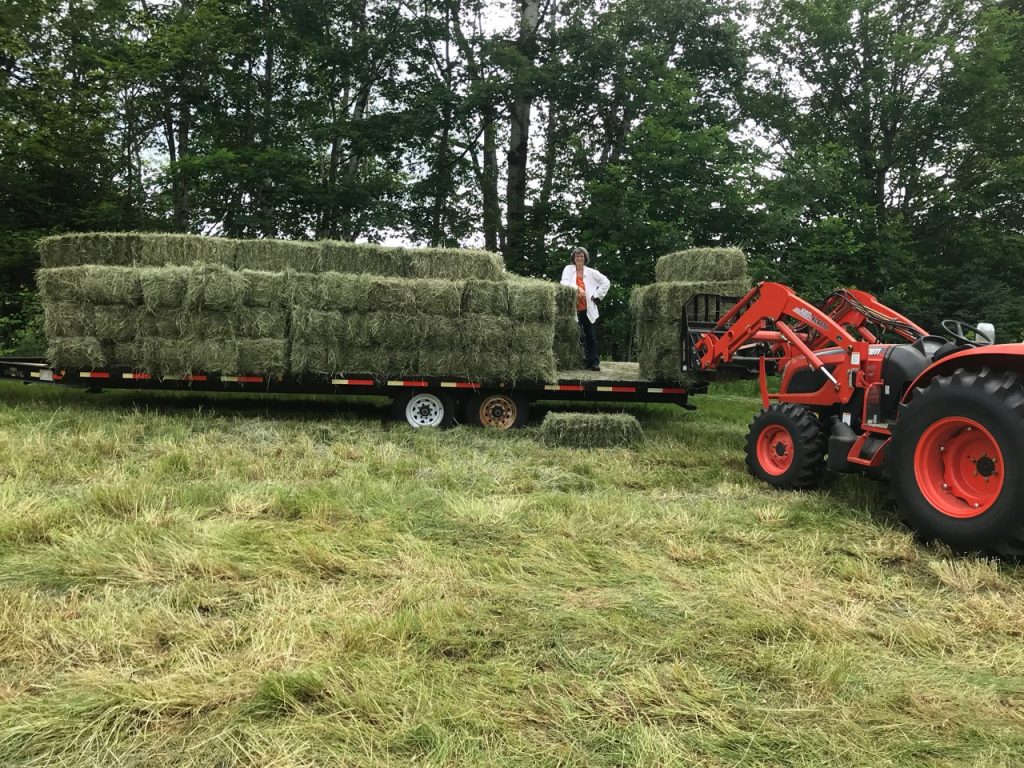 It took two full trailer loads to get all the hay out, and we finally picked up the last bale around 8:30 p.m. that evening.

Then in July, we started getting significant rain again … over 6 inches for the month … and another inch in just the past 24 hours … so that second cutting of hay may be just as prodigious as the first one! Oh no!